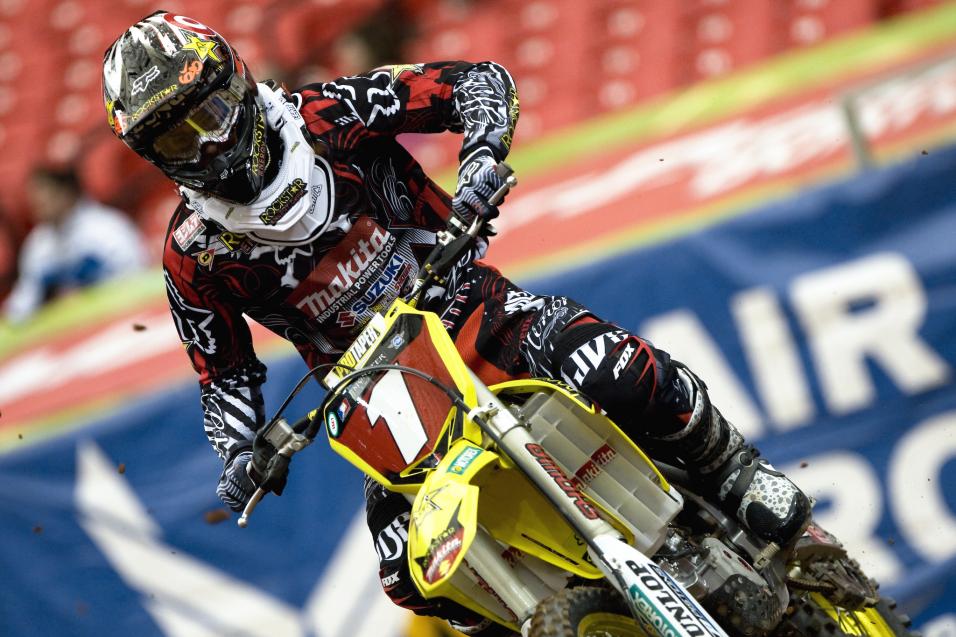 Practice and qualifying is complete here in the Georgia Dome. Let’s get the two phrases we put in every practice report out of the way right now:

Looks like we’re set for some great racing tonight.

The start will be critical tonight.

Okay that’s set. Let’s get into some practice times from the final timed session.

In the Supercross Class, the fast qualifier spot rotated around the entire time, just like the first qualifying session. Chad Reed led early and looked very fast and aggressive. Then James Stewart started bending time and space, rotating his Yamaha on every jump. He took the top spot. Ryan Dungey, fastest in the first practice session, had a tough time putting in a clean lap, especially when his teammate Brett Metcalfe crashed in the sand and Dungey had to pull a fast move and jump over him. Then Dungey logged a fast one and moved up to second on the board, with a 47.156 to Stewart’s 46.932.

Trey Canard was third with a 47.412, followed by Justin Brayton 47.477. Brayton had crashed hard in the first practice session, but came back strong in session two. His teammate Davi Millsaps was fifth fastest 47.499, so it looks like a good night for the Muscle Milk JGR crew.

Yes, the top sixth are only six tenths of a second apart. Looks like we’re in for some great racing tonight. Wait, already said that. 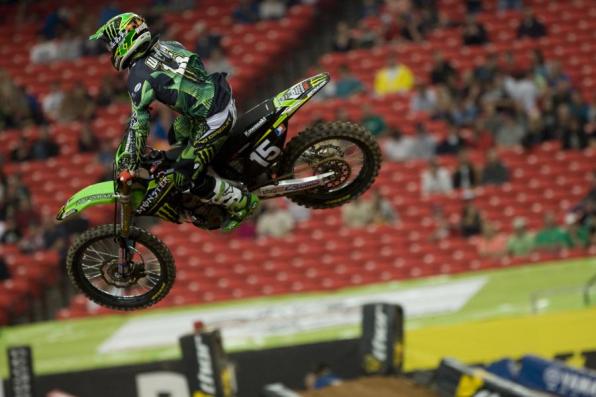 Gannon Audette, Blake Wharton, Blake Baggett, Matt Lemoine and PJ Larsen rounded out the top ten. Last week’s winner, Justin Barcia, crashed in the first practice session and was only 11th fastest in session two. But remember, Barcia was eighth fastest in Houston and he won the race.

Not too many options on this track, and the lap times are close. Seems like the key tonight could be getting a good start. Wait, already said that.

Did you miss our first practice report? If so we've posted it right here:

Lot’s going on here in Atlanta, the first of the real Monster Energy Supercross Eastern Region races for the season (Houston is not really in the east, people).

The ATL track returns to the classic football stadium layout after a few tight tracks over the last few weeks. There’s a long, long start straight running the fill length of the field, and the rest of the track is essentially made up of long rhythm lanes running the distance of the field. The whoops, which run along one of the outside lanes, aren’t that difficult, so handling the jump combinations best may be the dividing factor tonight.

And the start will be important, of course. When is it ever not?

Rumors were swirling coming into this race about San Manuel Red Bull Yamaha  Team Manager Larry Brooks. The word from several sources said he was no longer working for the team. This morning we tracked down James Stewart, and James claimed that Larry “wanted to spend some family time” and would not be at the race this weekend. We then asked James how much time family time would take, and James repeated ,“He’s just taking some family time.”

We’ll see. In the first seeded Lites practice, Ryan Sipes logged the fastest time with a 48.095, followed by Dean Wilson with a 48.535, Blake Baggett with a 48.721, Nico Izzi with a 49.147, and Blake Wharton with a 49.416. Houston winner Justin Barcia had a crash but got up okay—he wasn’t that fast in Houston practice, either, so don’t worry. Malcolm Stewart, Matt Lemoine, Jason Anderson, Barcia and Gannon Audette rounded out in the top ten.

We’ll be back with more after the second practice sessions, which begin at 4 p.m.