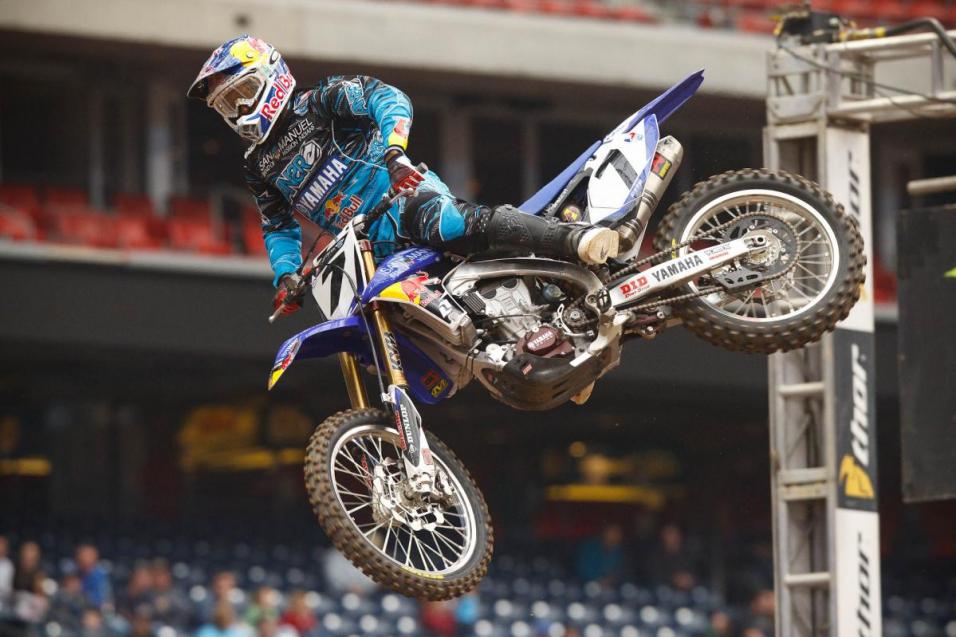 February 12, 2011 5:55pm
by: Jason Weigandt
Reliant Stadium Houston, TX Houston Monster Energy AMA Supercross Championship
The final set of timed practices are complete and the gauntlet has been thrown down in the Lites class by…Ryan Sipes! The DNA Shred Stix Star Racing Yamaha rider was one of the first Lites pilots to complete the triple onto table combo out of the second corner, and his fast lap held up all the way through the session. He ran a 49.583, with Blake Baggett, who was also flying, logging a 49.970. Baggett has trouble getting in a clear lap and not being blocked by other riders. He may have even more speed than his lap indicates.

Besides that one triple on section, there aren’t many other options on the track for passing—except those 180 degree bowl berms. There are four that could serve up some passing if someone needs to force the issue.

In the SX class, James Stewart actually rode the final practice this time (he didn’t the last two weeks) and logged the fastest time of the session with a 48.568. He only rode four laps, but they were good ones. Ryan Villopoto was right behind with a 48.708, then Ryan Dungey with a 48.884, Trey Canard 49.002 and Kyle Chisholm with a 49.011. Chizz is getting faster every week.

Andrew Short, Kevin Windham, Ken Roczen, Chad Reed and Brett Metcalfe rounded out the top ten. Reed hasn’t been near the front in times in either session—can he pick it up when it’s race time?