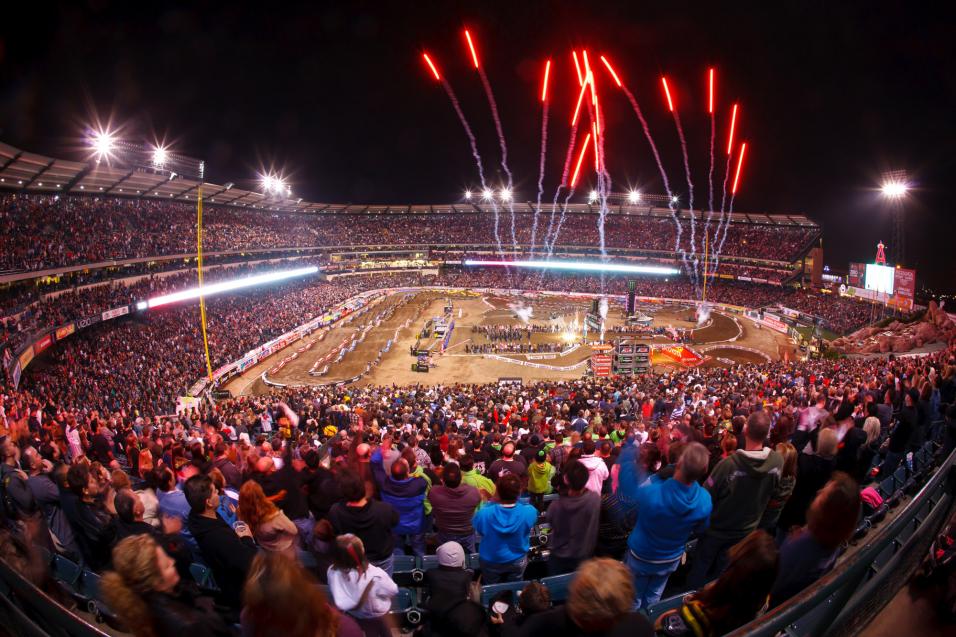 Welcome to the Race X Notebook. James Stewart and Josh Hansen grabbed the wins at round five of Monster Energy Supercross in Anaheim. What else went down? Here’s the scoop:

A2 is known as the Pink Race as teams, rider and fans all don some pink to promote breast cancer awareness and provide funding to the Susan G Komen foundation. Donations were taken from fans on race day, but the big auction on eBay begins February 9th. A ton of one-off pink gear will be available, check out the official Monster Energy SX site at www.supercrossonline.com for details in a few days. 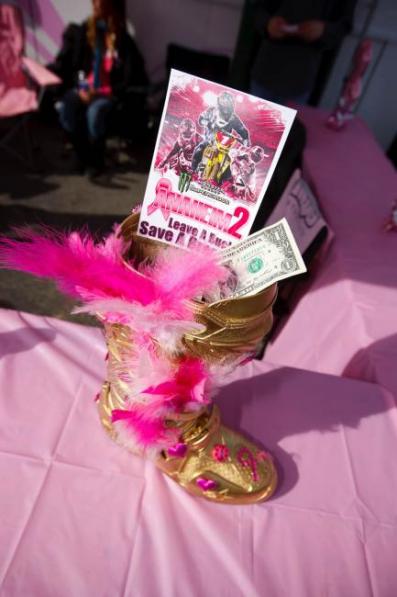 Stepping up to save funds.
Cudby photo

This weekend normally serves as the third round in Angel Stadium, but Los Angeles took over the previous Anaheim 2 spot. Maybe they can race a few more times here next year, because this race was a complete sell out.

The Anaheim 2 track was tight and technical, and timing the jumps on the twin rhythm lanes was the key to the race. The jumps were short and the transitions were small, so there wasn’t much room for error. Throw in the usual slippery Anaheim soil, and this track was tough. James Stewart served notice in practice as soon as he busted out a huge quad jump at the end of the first rhythm lane.  He was also quadding two sets of four jumps on the second rhythm lane. After the race, he admitted the first quad was a little big and he was hoping he wouldn’t have to do it in the main, and once he grabbed the holeshot and started pulling away without it, he decided not to do it. But he went quad-quad through the second rhythm lane for nearly the entire main event.

Ryan Villopoto tried to keep his chin up after he started in second behind Stewart, but was not able to keep pace. He said the track was slippery and he was thought better of pushing it too hard and making a big mistake. Similarly, Chad Reed was into third on the first lap and stayed there the whole way.

Ryan Dungey’s championship hopes took a huge blow when his chain derailed as he was coming through the pack in the main. After the race, his Team Manager Mike Webb said Ryan’s sprocket was not bent, but there was some heavy gouging in it, indicating he must have bumped into another bike, which could have caused the chain to derail. 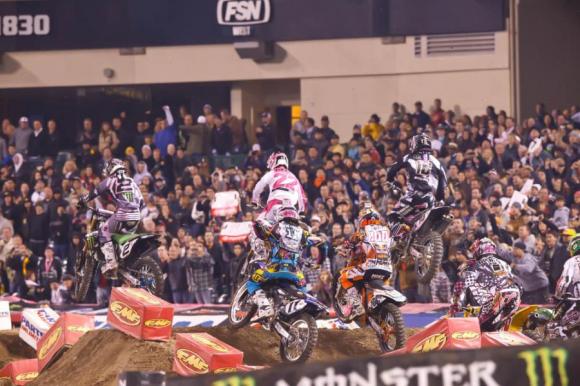 The pack was this close early in the race, but battles never materialized.
Cudby photo

Justin Brayton rode to a solid fourth, ahead of Trey Canard, who started way back. Brayton nearly landed on Reed on the first lap, allowing Mike Alessi to sneak through into third for a short time. Alessi eventually went back to 12th, but that’s still his best finish of the season. His teammate Andrew Short also logged his best ride of the year, and said the technical track really worked well for his 350.

Not much battling to speak of in this race. The best racing came from Brett Metcalfe and Davi Millsaps, who duked it out in their heat race and the main event. Metcalfe overcame a bad start to lock down ninth, over Millsaps, who was tenth. 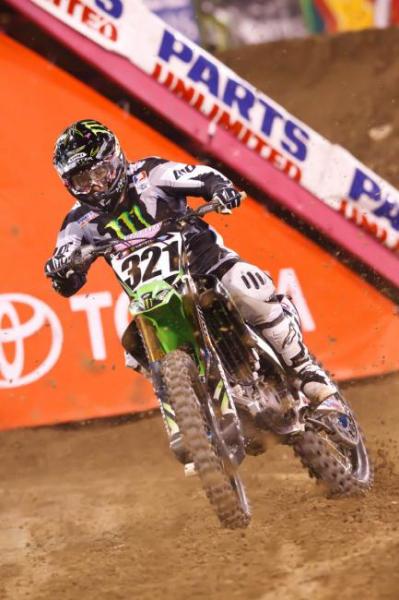 Kevin Windham’s results are not were they were last season when he finished second in points, but the veteran says he’s riding just as well as before. “I’ve been getting sevenths, which sucks, but the thing is that I feel like I’m riding well,” said the veteran before the race. “It’s just that the six guys in front of me are riding really fast, as well! Everyone is on their game this year.” Windham took eighth on this night. In his heat race, he made a mistake in a rhythm lane and crashed with Ivan Tedesco. Tedesco recovered and took seventh in the main, echoing many of Windham’s statements. “This year, everyone is so on their game, if you don’t have everything perfect—20 perfect laps and a good start—you’re going to be in trouble.”

Heat race wins went to Kyle Cunningham and Josh Hansen in the Lites class, and James Stewart and Ryan Dungey in the SX class. Dungey was the fastest qualifier in the SX class, but Stewart elected not to ride the second timed practice, where Dungey generated his fast time.

Kyle Chisholm had a huge crash in practice, but returned for the second practice and saw his number battling near the top of the lap board. He was strong in the main event, too, running fifth for several laps before a crash dropped him to 14th. Chisholm’s teammate Tommy Hahn was unable to race due to a sore shoulder.

Tyla Rattray injured his back in a crash during Thursday press day and was unable to ride.

Austin Stroupe looked to be making some progress after making the SX class main for the last few weeks, but his sore shoulder was giving him trouble again in practice, and he sat out of the night program.

Cole Seely, winner of the LA SX just two weeks ago, was charging toward the top five about halfway through the race when he went down and dropped back. He recovered for 11th.