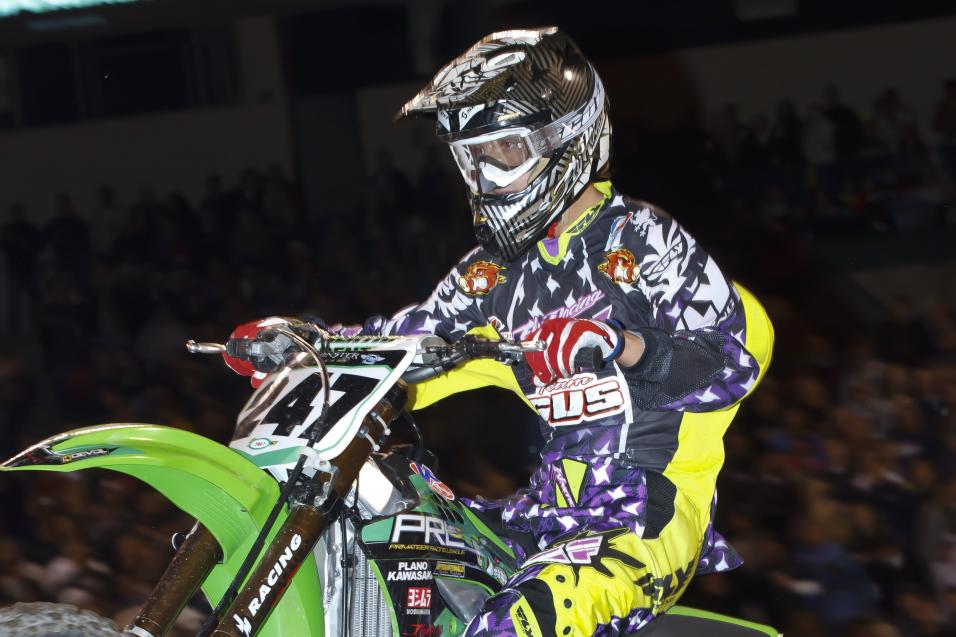 Advertisement | Advertise with Us
Unless you’ve been living under a stack of worn out Dunlops, you know that the floundering economy has had a huge effect on our sport. Sure, the top guys are still doing well, but much of the support for the guys who need it most, the privateers, has all but dried up. At the close of 2010 things got a little bleaker when Wonder Warthog Racing, a longtime supporter of the privateer movement, looked as though it would be no more. Fortunately, that changed when WWR was reincarnated as The Privateer Journey for 2011. We caught up with the team’s new manager, Ted Parks, in the pits at Phoenix, where he filled us in on the details of the program.

You’re no longer the official Wonder Warthog Racing team, but I understand that’s where you have roots.
Right. It started with Scott Kandel (original founder of Wonder Warthog Racing), and is now called The Privateer Journey. It’s a new deal we’ve started this year to try to bring more publicity to the sport and help out the privateer kids. We’re keeping the Warthog alive, while Scott is acting as a benefactor for us with all of his contacts and everything. It’s working out; it’s a pretty good program this year.

Can you give us a short background on the Wonder Warthog effort for readers who may not be familiar with the team and what they’ve done over the years?
They were helping the privateers with free product, helping get their bikes to the tracks, and them to the races. Just helping them succeed in their goals and their dreams. It’s a very expensive sport, and we’ve tried to put together a program to help these young athletes out.

The team was close to folding after last year, yet here you are. Take us through the chain of events that led to you being at the races.
I decided to step up with Brian McDonald of the Privateer Racing League. He’s training the young men, and I decided to step on board and donate my services to help the organization run smoothly. Basically, what I do is manage it, and make sure we have no problems, and no drama. So far, it’s exciting because we’ve got moms, dads, little brothers, little sisters--we’ve got everyone involved. It’s fun, and we’re really enjoying it this year.

It doesn’t sound like you are getting rich off the deal.
No, no sir. All my time is donated, and whatever we get donated to us, we put back into the team and the riders to help them out.

How many bikes do you take from race to race?
Ten bikes. 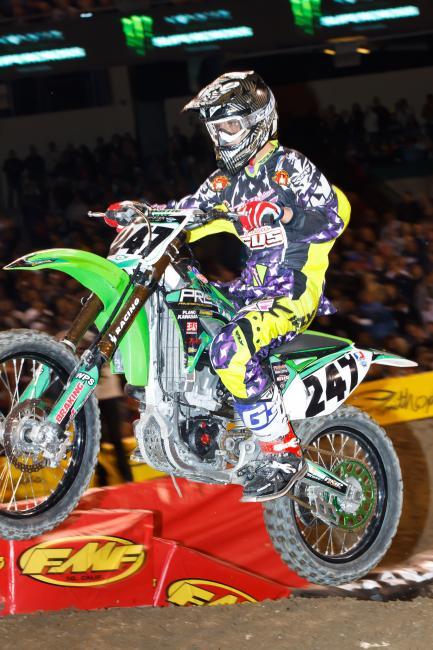 The Privateer Journey has helped out the #247 of Teddy Parks this year.
Photo: Simon Cudby

What would you say the most rewarding part of doing this is?
The smiles on the young kids’ faces, and watching them succeed. It’s like I explained to them: In football, you’ve got 40 champions on the sideline, and in motocross, you have one. In my opinion, if you make the night program, you’re considered a champion. It helps boost these kids’ ego, and it helps them strive to be better and better, instead of knocking them down. Even if you finish 35th, you’re a champion in my book, especially in this sport. It’s tough, it really is. After Anaheim some of the boys were disappointed, and I explained it in that manner, and they started smiling. Then we broke down and loaded up, and I had 10-year-old boys and girls handing me the pieces of the canopy! To see the family get involved like that, it just about brought tears to my eyes. That’s what brings a smile to my face. I’ve spent a lot of money out of my pocket, and I’m not a rich man, but I enjoy it. I want to help these young men out.

I know the season is early, but do you have any favorite stories yet?
Well, Teddy (Parks) was right on the bubble last week between the two Alessi boys, so that was pretty impressive. Brad Nauditt first time, first supercross race, he made the night program. Adam Enticknap went out and made the program. It’s exciting.

Other than yourself, who are the main sponsors?
Fly and WPS help us out a lot, Scott Goggles, Galfer just stepped on board, No-Toil Filters, S and L Products, Jay Clark has helped immensely with pistons, cams, bearings, and seals, Precision, there’s a whole list. We’ve set up a website, www.privateerjourney.com, where people can donate $1, $5, $10, whatever. Every little bit will help, and if we have 20,000 people donate $1, well that helps pay the fuel to get us down the road.

Do people donate to the team, or can they donate to a specific rider?
We have it set up both ways. We have each rider, with a picture of them, some riding, and their stats. We have a PayPal account set up so that they can donate to any one of the ten riders, or they can donate to Texadian Productions, the guys doing all the video, we video all of our training at the academies. We’re trying to start a new trend, and bring in a younger group. I think it’s going to be really good this year. We’re getting a lot of people helping out, and I’m hoping it will help Feld out by bringing more spectators to the races. This is what it’s all about.

Is there anyone you want to thank?
I’d like to thank MotoConcepts and Mike Genova. He’s really helped out a lot. He’s a remarkable man, and we appreciate everything he’s done for the organization. Also, Scott Kandel. He’s done this for years, and we want to keep the Warthog alive.