Motueka’s Josh Coppins finished the job he started in Tokoroa back in December, wrapping up the New Zealand Supercross Championship at the fourth and final round near Timaru on Saturday afternoon.

At the conclusion of last season’s world motocross championships, the former factory rider on the Grand Prix motocross scene returned home after a 15-year career chasing prizes in Europe to hunt down a little domestic glory.

And what a hunter the Yamaha star has proved to be, winning three major Kiwi titles in as many weeks.

First of all he clinched the North Island Supercross title for the open class, the first two rounds of the national series (in Tokoroa and Taupo) counting for North Island championship honours.

He then pushed ahead to do the same thing when points from the two South Island rounds in Motueka and Timaru were added up, making it matching “book-ends” when he took the South Island title as well.

But the overall count-up of those four events also gave Coppins the main prize, the open class crown for the Backflips-sponsored New Zealand Supercross Championships.

In fact, McDonald had been only 10 points behind Coppins at the start of race action at Timaru and he made his intentions clear when he won the first open class race. However, he finished runner-up to Coppins in the next race and then was forced to withdraw from the final and deciding race when he crashed and damaged his bike’s radiator. 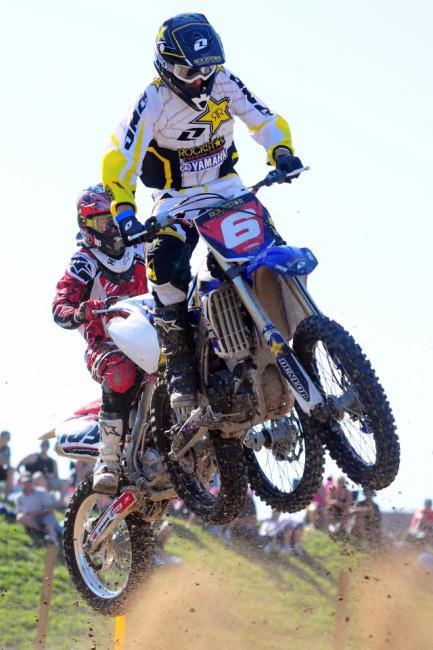 “It’s a great result for Yamaha and good to get these results for Yamaha right off the bat like this,” said Coppins afterwards.

“I’ve had great support from Craig Dack Racing in Australia and from Yamaha’s Peter Payne in New Zealand and this is the best way to repay them.”

The dominant rider in the class at three of the four rounds, Smith finished the series a whopping 33 points clear of Taupo’s Nick Saunders (Kawasaki) and 40 points ahead of Tauranga’s Peter Broxholme (Honda).

There were five different race winners in this class and, unfortunately, it became something of a battle of attrition as, one after another, defending champion Mason Phillips (Mount Maunganui, Kawasaki), former champion Scott Columb (Queenstown, Suzuki), Taupo’s Brad Groombridge (Suzuki), Rangiora’s Isaiah McGoldrick (KTM) and Australian visitor Jackson Richardson (Kawasaki) all dropped to the sideline.

Despite constant pressure coming from Rangiora’s Micah McGoldrick (KTM), Atiamuri’s Dion Picard (Suzuki) held on to win the Junior 250 crown, while Hamilton’s Josiah Natzke (Yamaha) was clearly in a world of his own in the junior lites (85cc) class, winning 11 of the series’ 12 races, to finish a massive 38 points ahead of Pahiatua Kawasaki rider Scott Sowry.