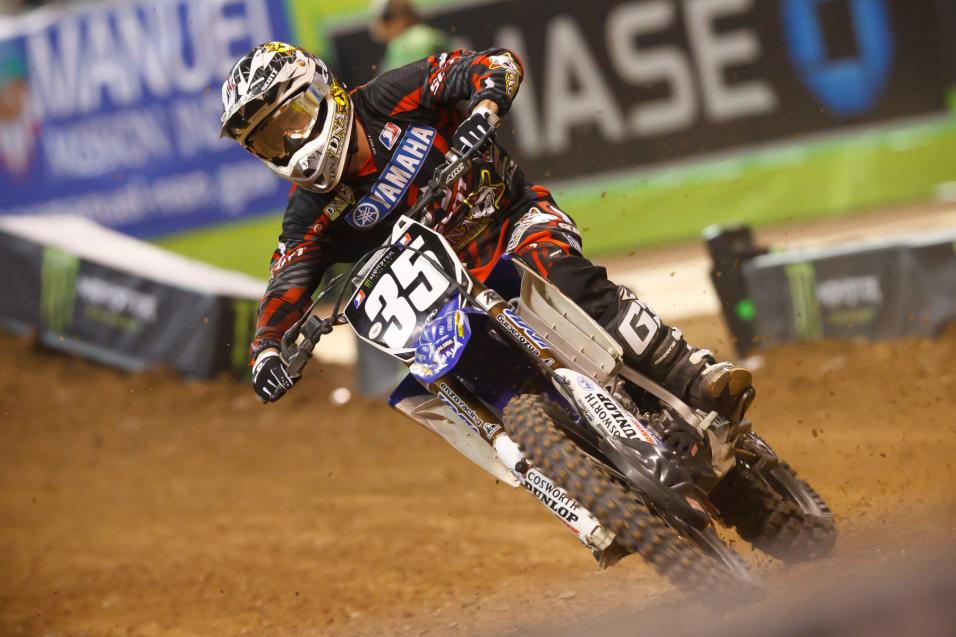 What you probably don’t know is where Kyle Cunningham finished. The Star Racing rider had one of those nights where his finish doesn’t reflect how fast he was going out there. In his heat race, Tyla Rattray had a nice lead on him until Cunningham ran him down and dogged him for a few laps. On the final lap, Cunningham blitzed the whoops and pulled even with Rattray in the ensuing corner. A triple jump followed, but Cunningham rolled it, all but handing the race to Rattray. A crash had brought out the yellow flags on that particular jump on the previous lap, and it’s possible that Cunningham thought the caution was still in affect.

Later, in the Lites main event, Cunningham was involved in one of the best battles of the night, fighting tooth and nail over third place with Morais and Ken Roczen. The battle was so tight that the three of them could have reached out and grabbed each other’s fenders on some of the jumps. At one point, Roczen and Cunningham even swapped positions.

Then, Cunningham’s run at the podium came to an abrupt end when Roczen crashed right in front of him in the sand section. Cunningham had nowhere to go and collided with Roczen. Although he was able to remount and finish the race, Cunningham wasn’t able to get back to the front, and he finished the race in tenth.

It was an unfortunate end to an otherwise brilliant ride for Cunningham, but the good news is that he still has seven rounds to chase wins and podium finishes. Keep an eye on Cunningham next week; if he doesn’t encounter any more bad luck, he just might turn your head.