Both Short and Alessi were placed into the second heat of the SX class. Short started 7th around the first corner with Alessi back in 11th. Short maintained his pace throughout the eight lap heat and remained in 7th to easily qualify into the main event. Alessi picked up his pace in order to secure a few more spots working toward the 9th place final qualifying spot. That spot happened to be held by his brother Jeff Alessi. After following his brother for a few laps Alessi was able to make the pass for the final transfer spot on the last lap. “I had to make an aggressive pass on my brother to get into the main event, but that’s part of racing,” remarked Alessi.

When the gate dropped for the main event it was Alessi up front early. Alessi rounded the first turn in 3rd position. Short did not have as good of a jump but still managed a top ten start rounding the first turn in 9th place. After a few battles within the first lap Alessi had dropped back to 7th and Short to 10th. “I didn’t have the pace of the top few guys tonight and I fell back quite a few positions from my good start,” stated Alessi. 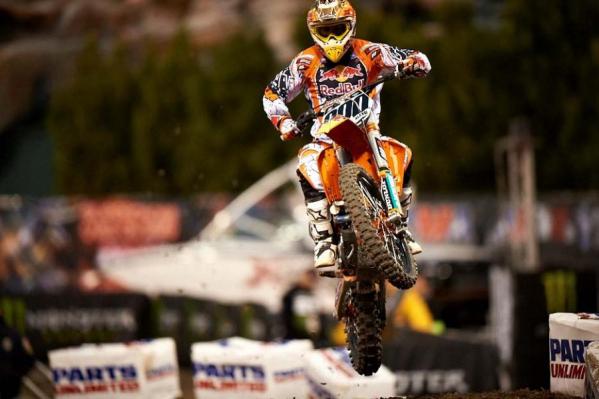 Alessi continued to hold off hard-charging riders for the first half of the race before he fell further off the pace. “I need to work on my fitness and prepare myself for longer races. I just returned from Australia where we were racing 5 to 6 lap mains and my conditioning is not where it needs to be to run inside the top ten.” Alessi eventually finished 14th overall.

Short dropped as low as 12th early in the race after a few mistakes but kept it together and continued to charge forward. On the fourth lap, Short passed his teammate Alessi to regain 10th and began to look ahead. He spent the remaining laps of the race closing in on the 9th place ride of Josh Grant but was unable to gain the position before the checkered flag.

“I struggled tonight. I felt off earlier in the day and wasn’t able to get to a point where I was riding where I knew I could. I am just glad to get the first round out of the way and am looking forward to an improved result in Phoenix,” recapped Short.