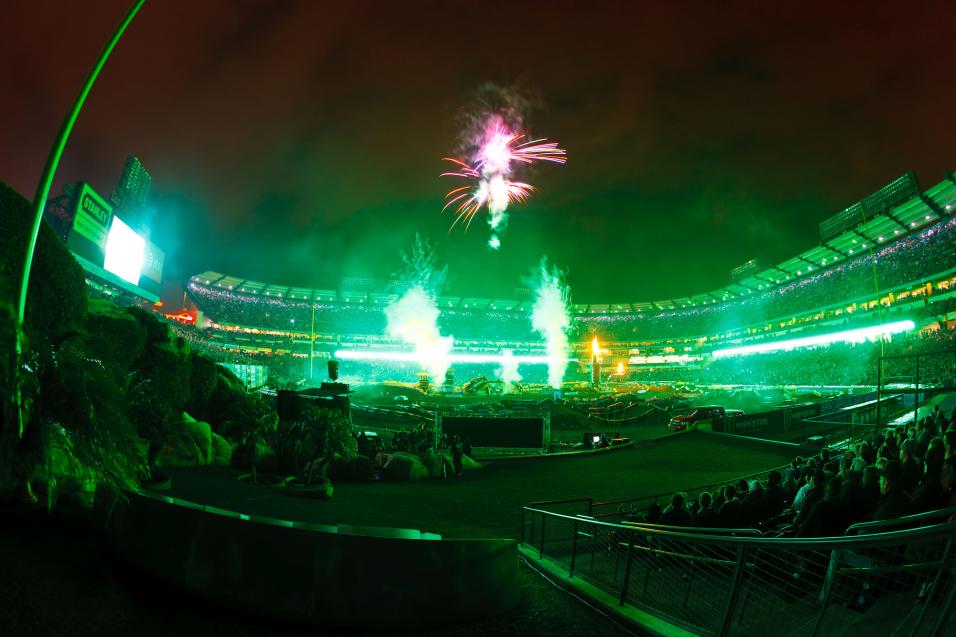 The jumbotron showed a well-produced video of the Monster Energy Kawasaki rider, starting with a shot of his massive, season-ending crash last year at St. Louis. It followed with clips of him being carted off the track, and going into surgery. Then shots of massive scaring, and ugly x-rays. The magnitude of the night’s task came clear. Not only was Villopoto racing his first race since April, he was also racing his first race since an absolutely massive injury. One could rewind back to April, when Villopoto was closing in on Ryan Dungey for the supercross points lead, and just assume he would pick up where he left off. But the 2011 Ryan Villopoto has plates and screws in his leg and ankle where the 2010 version did not. 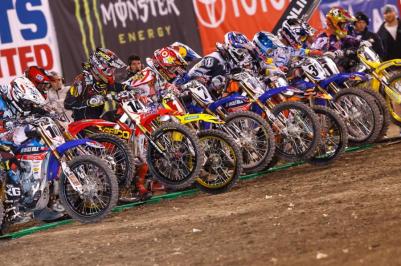 Nothing special from Villopoto early on this night. He was scratching and clawing to just get into the top-five in practice times. Then he jumped into the lead in his heat race only to be caught and passed by James Stewart. It didn’t look good for a Villopoto win.

The certainty now seemed to be on Stewart’s side. Out for even longer than Villopoto last year, Stewart looked 100 percent healed and as fast as always. In an uncertain season, Stewart had just become the surest bet.

Then the gate dropped for the main, Villopoto went to work, and 20 laps later had some new hardware to match the stuff in his leg: a shiny new first place trophy. 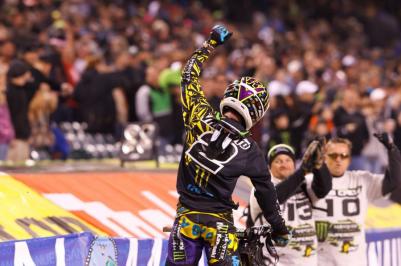 “I wanted all of that stuff to be in that video because I wanted the fans to see what I had been through,” said Villopoto after taking the Monster Energy Supercross opener a Angel Stadium in Anaheim. California. “The last time I had raced, I ended up in the hospital for three weeks.”

Villopoto used good starts to do his damage. Dodge Motorsports Hart and Huntington Kawasaki’s Ivan Tedesco grabbed the holeshot in the main event and led the first lap of the year, until Villopoto went past and started laying down the fast laps. Stewart was buried in the back—12th early—on a track not kind to passing. Dungey looked to be struggling most of the night, and took a few laps to find his groove. Once he got going, he passed Tedesco and his teammate Brett Metcalfe to move into second. He tried to run Villopoto down, to no avail.
Stewart’s charge led him to third, but he never had time to challenge the Ryans. Rookie 450 rider Trey Canard took fourth, and Chad Reed came from even further back than Stewart for fifth. 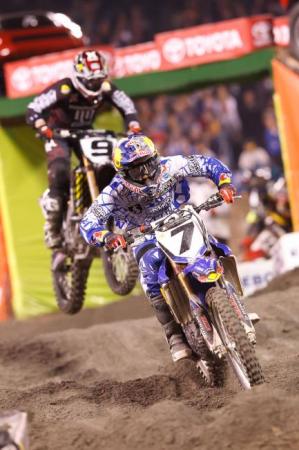 Stewart had speed all night, but a bad start prevented him from showing it in the main.
Cudby photo

For the final ten laps of the main event, Villopoto, Dungey and Stewart sat 1-2-3 with about five seconds between each. No one could make up ground, and no one lost much, either. The best part is, the uncertainty continues into the next week, because without seeing Villopoto, Dungey and Stewart truly battle, it’s impossible to predict what comes next.

Further, opening rounds are usually so filled with nerves that no one shows their best stuff. In a season so filled with anticipation and excitement, the racing seemed pretty tame. The good stuff will have to wait. 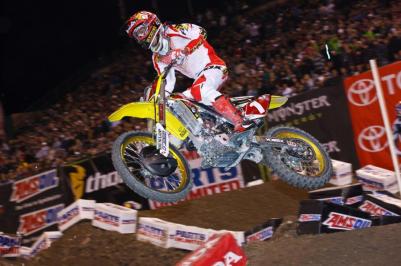 In the West Region Lites race, the Monster Energy Pro Circuit Kawasaki team stole the show with a 1-2-3 finish. New recruit Broc Tickle took the early lead, but at the halfway mark his veteran teammate Josh Hansen turned it up, closed in, and took over the lead. Hanny was never challenged again and sailed to the win, Tickle took second and Tyla Rattray was third in his first U.S. Supercross race. 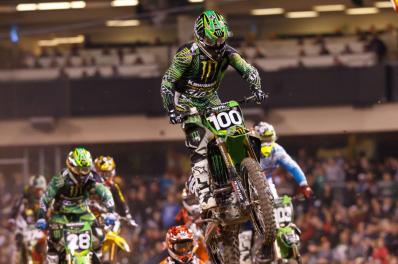 Hollywood Hansen walked off with the Lites win.
Cudby photo

Unfortunately some other top Lites contenders had their problems, including GEICO Powersports Honda’s Wil Hahn, who crashed in practice and couldn’t race due to a back injury. Red Bull KTM’s 16-year-old wunderkind Ken Roczen was fast in practice, but a bad start and nerves slowed him to 7th in the main. Rockstar Suzuki’s Martin Davalos was solid and took fourth ahead of Lucas Oil Troy Lee Honda’s Cole Seely.

Racing continues next weekend in Phoenix, Arizona. Expect a little more of a showdown now that the opening night jitters are out of everyone’s system. 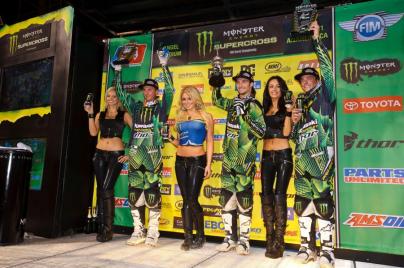