The AMA Arenacross Series begins January 8, 2011 at the BOK Center in Tulsa, Okla.

Team Babbitt’s is getting ready for the 2011 AMA Arenacross season! 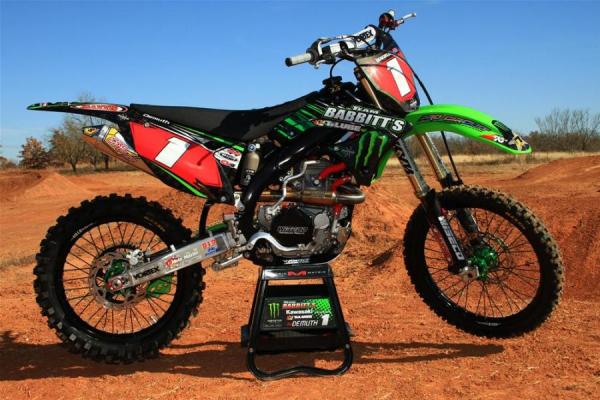 Weekend race report brought to you by Maxxis.

During a time when many of us have been relaxing and occasionally over-indulging our Christmas and New Year’s festivities, Team Babbitt’s has been busily preparing for another successful year in AMA Arenacross.  And although they achieved a record setting championship sweep in 2010, there’s no resting on their laurels, as the series begins January 8th in Tulsa Oklahoma.

“I think that we are even more prepared than we were last year; we learned a lot from racing the 450.  It’s really just a process of dialing in the bikes for each rider; we didn’t need as much time as the Kawasaki is similar to last year’s bike” comments Team Manager Denny Bartz, who has been a staple of Team Babbitt’s success story.  Team owner Eddie Babbitt echoes Bartz’s comments with “the sponsors are excited, we are excited, and are certainly prepared – and cannot wait until January 8th!”  While many components of the team remain unchanged from 2010; 2011 sees Enzo Suspension and Team Babbitt’s joining forces to conquer the many demands of Arenacross tracks.

It goes without saying that every rider within the team wants to secure a title in 2011, but it may be Tyler Bowers that wants it the most.  Easily the fastest rider much of the previous season, and leading the championship all season long last year; Bowers had an unfortunate practice crash just prior to the pentimulate round – eliminating him from grabbing his first Championship.   Talking about Bowers, Bartz is quick to point out “Tyler is definitely determined to prove what he set out to prove last year.  He’s been out in California, including the Kawasaki Test Track with the Pro Circuit guys – so that will be a huge help to him.”

Certainly Bowers may be considered an early favorite; you can never count out two-time Arenacross Champ Chad Johnson.  The Wisconsin native hopes to trade up his number 2 plate, and add yet another championship in the record book for 2011.  In preparation for his new year Johnson had added studs to his tires as he has been practicing back home – before soon relocating to the much more temperate climate of Texas.  “You can never count Chad out – especially as the race winds down!  Chad has been doing a lot of different types of racing this year; from Supercross in Germany, to 2 hour hare Scrambles – so his endurance is there.  If Chad can get a start he can easily win!” says Bartz.

The story with third team member and defending champ Josh Demuth isn’t quite as promising.  With his recent injury, Bartz confirmed “Josh may have initially thought he could return, but I just spoke with him; he’s definitely not able to race Arenacross in 2011 – he’s now looking ahead to see if he can get anything lined up for outdoors.” Still, Babbitt’s will indeed have a third member as Utah native Grey Davenport joins the team.  Davenport grabbed a couple podiums at the end of the 2010 season, and as Bartz points out “Grey’s potential is there; he could be the dark horse this year.”    Like Bowers, Davenport has been getting in as much practice as possible on the West Coast.