Welcome to Racerhead, and welcome to another challenge in Doug Henry's life. As you probably know by now, the three-time AMA Motocross Champion and all-time comeback hero suffered another setback last week when his family lost their Connecticut home in a fire. It's hard to imagine so many trying and downright bad things happening to such good people as Doug and Stacey, as well as their children Briana and Ian. They lost pretty much everything. 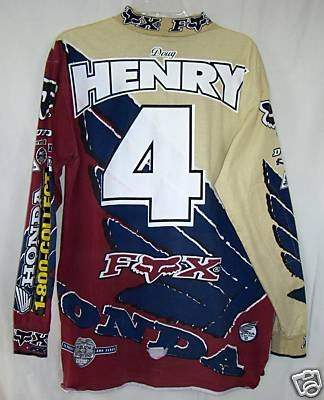 This one is being shipped back to its original owner by Johnny O'Hannah.
The first person to contact me wanting to help was Johnny O'Hannah, who has a rare Doug Henry #4 jersey from his abbreviated '95 season. That was the year Henry made his infamous launch off the hill at Budds Creek, landing with a broken back and unlikely to race again. Of course, he did! Johnny wanted to give Henry the jersey back, figuring it was the least he could do for a man who gave us fans and the industry itself so much to cheer for over the years.
That got me to digging in some old photo files for a wedding picture that Doug and Stacey had sent me from years ago. When the house went up, it's likely all of their photo albums did too, so this photo is heading straight to Connecticut, along with many others. 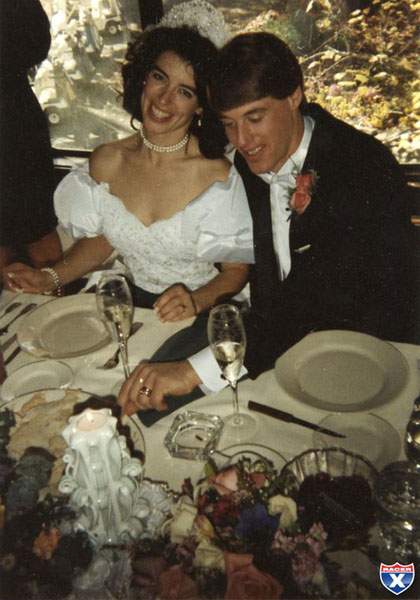 Doug and Stacy Henry on their wedding day.
And fortunately, they have a good friend in Paul Buckley, who has also been trying to help out the subject of so many of his hall-of-fame photos.
In the days after the fire HEAL Clothing set up a place on their site with information on how to contribute to help the Henry family rebuild. They have been processing donations and trying to help out however they can; to find out more check out this link.
And now the Road 2 Recovery, always there for the heroes of our sport, has set up a fundraiser as well. R2R's Anita Button spoke to Stacey Henry yesterday: "She wanted me to pass along a 'thank you' to everyone for setting up a donation site to help with the devastating fire," Anita explained. "She said they are doing well considering everything they are dealing with, and in the end it’s only stuff they lost . Her and Doug are grateful and overwhelmed with the outpouring of support from everyone."

Road 2 Recovery now has a donate button on the site, and they are also selling blue #19 wristbands, as well as the Dunlop Legends poster of Henry. You can learn more and donate a buck or ten or more right here.
It's times like this when the motocross community steps up and takes care of its own. Please do what you can to help the Henry family, even if just the amount you might spend on a pack of tear-offs or five gallons of gas—they need us right now.
Beyond that, it's been a busy week of photo shoots, traveling, training, and more for the rank and file of Monster Energy AMA Supercross. James Stewart's second season of Bubba's World aired on Fuel TV, while Kevin Windham held another Party in the Pasture fundraiser down in Mississippi, with the proceeds going to a local school. The headliner was moto-loving country star Craig Morgan, as well as "Cowboy" Kenny Bartram jumping, though the jumping got scratched due to the cool, misty weather that made the grass and the ramps a little too slick for nighttime jumping. All in all, maybe 5,000 showed up to watch the show and crowd around four massive bonfires, and K-Dub and his family were gracious hosts to all of the moto friends who came down and stayed at their home.
Within a couple of days, Windham was on a plane to California to continue testing his GEICO Powersports Honda and keep getting ready for Anaheim 1. For what it's worth, he looks fit, he's in good spirits, and he just might surprise some people ... again!
There's a lot of buzz still swirling around Chad Reed's new team for 2011. We're hearing he likes the bike, he's working hard, and has placed himself up at Castillo Ranch for some extended testing and training. No word on the setup of the team, but there's no doubt he's inspired to take on all of the guys who got signed up with teams that passed on him.
Dollar to dollar, the Australian version and the U.S. greenback are just about even right now. Knowing what the economy has been doing and how it's affected a lot of deals in the last year, this report on Australia's top earners in sports caught our attention. According to Fox Sports in Australia, Reed is the third-highest earner in Australia right now, behind only Formula 1 driver Mark Webber and NBA transplant Andrew Bogut.
The report says Reed made $7.5 million in his abbreviated 2010 racing season, which is actually more than MotoGP star Casey Stoner. That left Chad's former teammate at Yamaha, David Vuillemin, to wonder on the Vital MX board, "I'm skeptical with those numbers even if it is Australian dollars..."
There's one other rider who, like Reed and Pourcel, ended up without a seat when the music stopped, and that's Jimmy Albertson. After two years on the Grand Prix tour, Albertson is looking for a ride for AMA Supercross and AMA Motocross. I spoke to him yesterday for this Racer X 5 Minutes With. Click HERE to read.
The Great Outdoors is back, and it's another gem from the crew of Troy Adamitis, Jessica Young, Dave Dawes, John Rushton, and Nate Scribner. This year's storyline is Man the Machine, and it of course features Lucas Oil AMA Pro Motocross Champions Ryan Dungey and Trey Canard, plus top contenders like Christophe Pourcel, Eli Tomac, Mike Alessi, Brett Metcalfe, K-Dub, and everyone else on the tour. Of all of the lines of videos out there today, this one remains the leader of the pack. Pick up your copy for Christmas right here. 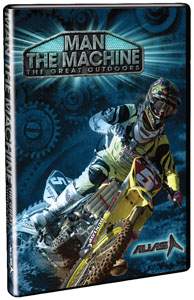 It was another big win for Team USA at the 2010 Red Motocross of Nations, as you no doubt recall. That's six in a row going back to 2005 for those of you keeping score at home. You can relive the memories of this one—and it was a dramatic day for everyone at Thunder Valley in September—with a copy of a new DVD. 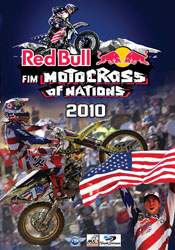 The 2010 Red Bull Motocross of Nations is Out Now on DVD, priced at $34.95 and will be available from leading video outlets or direct from Duke Video: mail@dukevideo.com. Visit www.DukeVideoUSA.com online.
Now here's Ping:
It was good to see Jake Moss starting to return to form last weekend. The flamboyant Aussie got the overall Down Under by being consistent over the course the four finals that night. His twin brother, Matt, won the 250 main as well and is leading that championship right now. Jake was really on a roll this time last year, and he was all set to ride for factory Rockstar/Makita Suzuki beside Ryan Dungey in America. Then he destroyed his wrist in a crash down there and it sent his entire 2010 season into a tailspin. Matt got the spot next to Dungey, but a preseason back injury pretty much ruined his season as well. After such an awful 2010, it’s good to see both of the Moss boys having some success again. It doesn’t look like either of them will return Stateside this year, but it wouldn’t surprise me if one or both of them make a run at it here again in the future.

By the time you read this, things will be in full swing out on Catalina Island off the coast of Southern California. After a fifty-year hiatus, the Catalina Grand Prix is back on, and it looks like it’s going to be a fun weekend. The logistics alone are pretty complicated. Every competitor (myself included) had to drive down to Long Beach this week to drop bikes off. Once on the island you have to coordinate gas, tools, lodging, and transportation to and from the start line. Red Bull is sponsoring the event, and they always do an awesome job promoting things. Travis Pastrana will make an appearance for the premiere of his new Nitro Circus movie on Saturday night. And there is a great lineup of riders that include top pros like Kurt Caselli, Tim Weigand, Johnny Campbell, Ronnie Renner, and Colton Udall, as well as Red Bull athletes like Daron Rahlves and random celebrities like Roland Sands and Andy Bell.... Yes, Andy Bell is kind of a big shot now. Things are almost guaranteed to get weird based simply on the list of people I just mentioned. 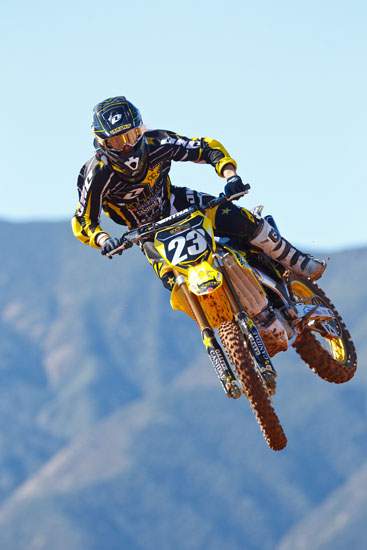 That's Martin Davalos, running a new digit, new bike, new clothes...
Photo: Simon Cudby
I got to watch the Rockstar Suzuki team this week during a practice session. Ryan Morais and Martin Davalos both looked fast and ready to go. According to the team, those two riders will line up at Anaheim for the West Region series and Trettel and Anderson will contest the East Region. Davalos and Morais have got to be the two fastest 250 riders in the sport right now who have NOT won a main event. Morais has a room full of second- and third-place trophies but hasn’t been able to get a win yet. Davalos has always had the speed but has struggled to stay healthy through a season. Maybe 2011 is their year?
Here's the Weege:
It's not just off-season prep time for the Monster Energy Supercross teams. The top riders in AMA Arenacross are against the same basic schedule, with their season kicking off in Tulsa, Oklahoma, on January 8 and 9. For many years, the Arenacross tour kicked off in late October or early November and wrapped up just before the SX Lites East campaign began. Now the series overlap. It's good in a way, though, because the October start usually meant most AX teams were barely getting new bikes before the series began and had virtually no testing time before the races. Nowadays everyone comes in more prepared—although some of the team people have told me the schedule may go back to the November start deal again next season.
The Monster Energy Babbitts Kawasaki team is definitely ready. Last year they swept the top three spots in the series with Josh Demuth, Chad Johnson, and Tyler Bowers. These are three of the bigger riders in the series, so they really benefited from arenacross switching back to 450s last season. Bowers started the year on fire and was dealing with late-season pressure from Demuth before a huge crash practicing at home left him with a broken femur and ended his season. If Bowers can get back to 100 percent, it should be a great battle between he and his teammates.
The Tuf Racing team is always strong, too, and 2009 champ Jeff Gibson will be looking to grab the 2011 title as well. But the big news is the addition of Heath Voss to the team. Voss has always been a great indoor rider, and he certainly has the experience and strength to rub elbows with the Babbitt's boys. Heath's never been a great starter, though. If he can figure that out, he could do what Gibson and Danny Smith have done in the past--go straight from supercross to arenacross and win a championship in his first try.
We'll close on some random notes... 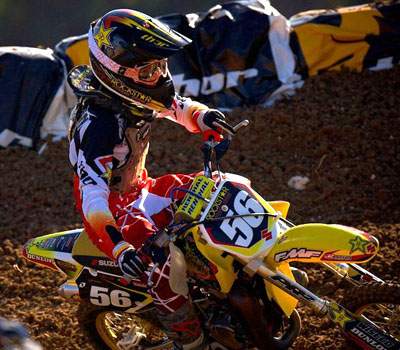 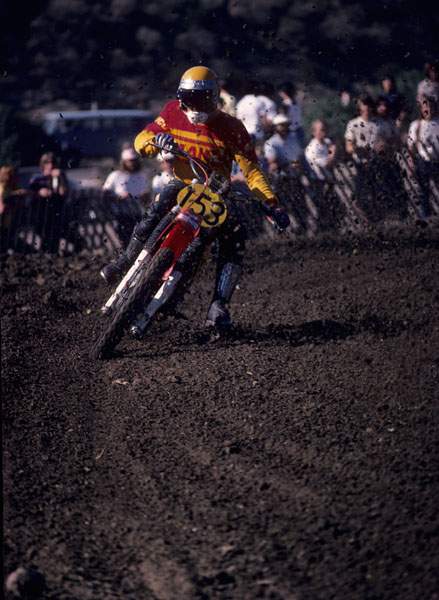 That's Sylvain Geboers, thirty-five years ago at Saddleback, as a Maico factory rider!
The final week of voting is now underway in The O'Neal Model Search, so go check out the ladies and vote for your favorite.
So that's about it for this week. One more month to Anaheim! Thanks for reading Racerhead, see you at the races. 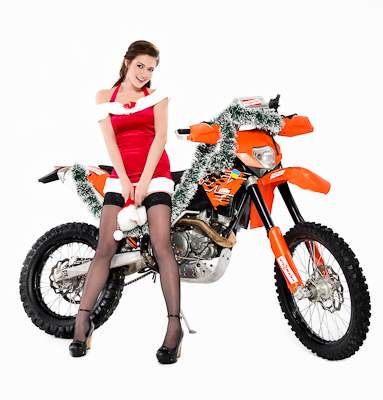