Carlsbad, CA - The ARMA Energy SNX team energized the Dew Tour Championships
this weekend in Las Vegas. Our successful season was capped with wins from
Brandon Dosch in BMX Dirt and Chad Kagy in BMX Vert.

In BMX Dirt, Brandon Dosch rode hard all season and found himself in 2nd
place heading into the Championships. His spectacular win here came down to
his final run and was packed with big tricks, including a triple whip,
opposite 360 lookback and a corked 720. This was enough to give Brandon the
win and the overall Dew Cup for the 2010 season.

Chad Kagy is one of the top BMX Vert riders in the world and his performance
in the Championships was true to form. All three of his finals runs were
solid and he pulled the trick that he's been perfecting all year, a barspin
flair to tuck no-hander. Kagy ended up with a top score of 92.50 and the Dew
Tour Championships win. He also finished the season 2nd in the Dew Tour BMX
Vert standings.

Fellow ARMA BMX teamrider Gary Young had some solid finishes with a 4th in
Dirt and an 8th in Park. Gary had a great year and the Dew Tour was a good
showcase of his immense talents. The rest of the ARMA team made an impact in
Las Vegas, including Mike "Hucker" Clark and Skateboarder Chad Bartie.

"We're really proud of the efforts of the entire ARMA team this weekend and
all year long. Dosch and Kagy's performance was a nice finish to our
inaugural Dew Tour season", said ARMA spokesman Scott "Hollywood" Sepkovic.
ARMA Energy SNX can be found on Facebook and on Twitter.  Stay tuned for the
launch of the new ARMA website very soon.

ARMA
ARMA Energy SNX is a revolutionary new energy snack product that produces
the same amount of energy as a premium energy drink. This great tasting
snack is comprised of almonds, peanuts and trail mixes, full of protein, and
is energy-coated with caffeine, taurine, and B-vitamins. ARMA is the ideal
snack to fuel your energy and feed your hunger for action sports and daily
use. 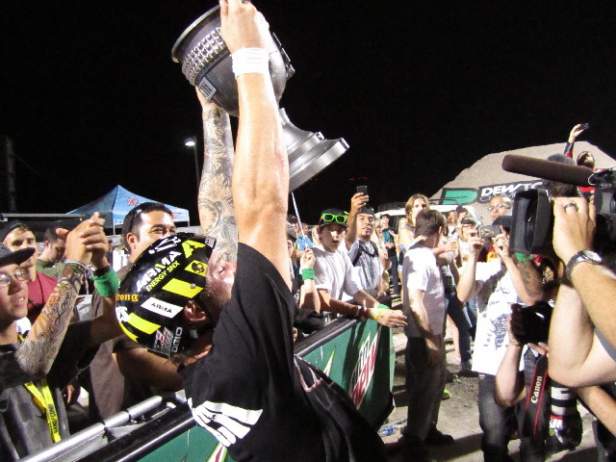