Zach Osborne became the first British Motocross Champion from America this century when typical English rainfall flooded the Hawkstone Park circuit last Sunday and forced the final round of eight in the highly-competitive 2010 Maxxis series to be cancelled. The 20 year old was already on the cusp of sealing his first major professional honour with the Bike it Cosworth Yamaha team thanks to a 47 point advantage with just 75 points remaining. 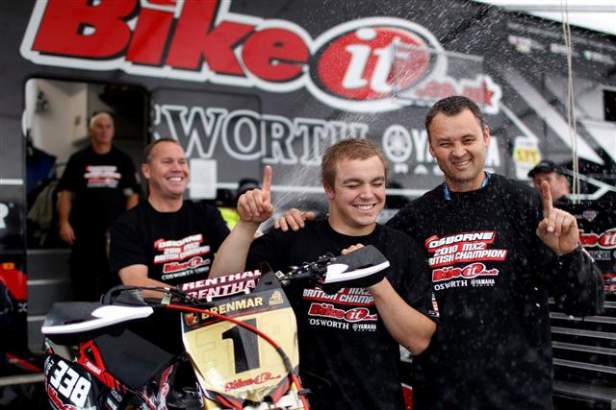 Three weeks ago Osborne celebrated becoming the highest-placed American in the FIM Motocross World Championship since 2000 after finishing fourth in the fifteen Grands Prix of the MX2 category (250cc four-strokes) with three podium results. Sitting under the soaking awning of his British team at Hawkstone on Sunday the Virginian knew he needed an easy outing across the sand to confirm his crown after having aced thirteen motos of the previous twenty-one and claiming five of the seven rounds on UK soil.

When officials deemed the Shropshire course unfit for racing Osborne and his crew were able to start the celebrations. "I’m over the moon," said Osborne. "Even though this was not the end that we were expecting I’m still really pleased to have completed my first full season with this title and being fourth in the FIM World Championship. I think I deserved the British Championship after thirteen moto wins and part of this is down to the excellent work by the team and in providing a competitive bike and the right environment from which we could get these results."

"I’d like to thank my family, and girlfriend Brittney who spent the summer with me in Europe and made home feel not so far away," he added. "My mechanic Nick did a great job and Steve was always there with his support as were Ash and Kenneth Gunderson. We will have a good night out on Wednesday and then I’ll head home to think about my preparation to be even better in 2011."

"It takes a whole team of good people to win a championship and this year we had the right combination to enable Zach to win for us," remarked Bike it Cosworth Team Manager Steve Dixon. "Zach has ridden really well this year both in the world championship and also at home and thoroughly deserves the title; his results put him clear of any other rider."

Number ‘338’ will now travel Stateside this week and continue work on the Club MX training facility based in Chesterfield, South Carolina, which he has co-established and will be offering advice and tutelage for aspiring off-road motorcycle racers. "It will be the place to be for winter training and I hope I can help people in any way I can," he said. More information can be found at: www.clubmx-sc.com.