MORGANTOWN, W.Va. (August 30, 2010) - The 10th round of the 2010 Lucas Oil AMA Pro Motocross Championship introduced the newest member of the exclusive national championship family as Rockstar/Makita Suzuki's Ryan Dungey joined legendary names like Hannah, Bailey, Johnson, Ward, Bayle, Stanton, Emig, McGrath, Henry, and of course Carmichael in the history books as a premier class title holder. This weekend, the world's most prestigious motocross series will host its penultimate round at the Labor Day tradition from Steel City Raceway with the FMF Steel City National in Delmont, Pa., on Saturday, September 4.

Dungey continued his impressive dominance of the 450 Class by capturing his ninth consecutive victory and posting his 10th and 11th straight moto wins at the sands of Southwick. The 20-year-old is setting a new standard of success for a debut season in this class, overcoming what was thought to be the most extraordinary rookie season of all time by 10-time champion Ricky Carmichael in 2000. By virtue of his 450 Class title, Dungey becomes the first rider in history to capture both the premier AMA Supercross and AMA Motocross titles as a rookie and has already achieved the career grand slam by winning all four titles in the sport - AMA Supercross Lites, AMA Motocross 250 Class, AMA Supercross and AMA Motocross 450 Class - in successive seasons. 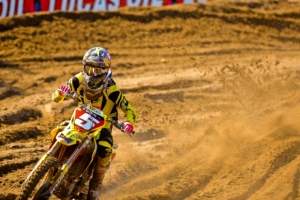 Behind the Minnesota native in the 450 Class standings, the battle for the runner-up spot in the championship is heating up between Honda Red Bull Racing's Andrew Short, who currently occupies the position, and GEICO Powersports Honda's Brett Metcalfe. Both riders experienced misfortune at Southwick and are separated by only three points with two rounds remaining. Throughout the season, the Honda pair have been the most consistent challengers to Dungey's dominance and with the need to bounce back after a tough weekend, their battle for second will surely come down to the wire.

For the first time in the second half of the season, the 250 Class featured an overall winner other than GEICO Powersports Honda's Trey Canard. The Oklahoma native had posted four consecutive victories and surged into second place in the championship behind Monster Energy/Pro Circuit/Kawasaki's Christophe Pourcel. At Southwick, Canard continued his strong effort with a Moto 1 win while his rival was forced to overcome a bad start. With the championship lead within striking distance, the duo reversed roles in Moto 2 and as a result, Canard's damage to Pourcel's advantage was minimal and now, just 13 points separate the pair. 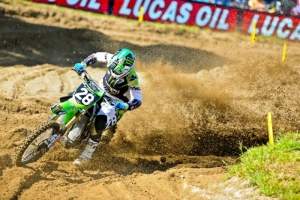 Capitalizing on both riders' hard luck was Monster Energy/Pro Circuit/Kawasaki's Tyla Rattray. The 2008 World Champion from South Africa posted back-to-back runner-up finishes to take the second overall win of the season and his career on the same day as the birth of his first child, a beautiful daughter named Brooke, back in California. As a result, Rattray also moved into third in the highly-competitive 250 Class title fight, just one point ahead of his rookie teammate Dean Wilson.

In a season that has already proven that anything can happen in the smaller displacement, the battle between Pourcel and Canard looks as if it will be a dogfight through to the finish. With his wave of momentum brought to an end, all eyes will be on Canard at Steel City to see how he responds while Pourcel looks to reassert control of the division. Last season, Pourcel took the overall victory at Steel City over Ryan Dungey, though it was Dungey who claimed the 250 Class title on that day. 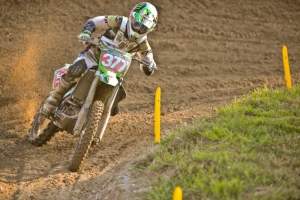 The second half of 2010 hasn't gone how Christophe Pourcel would've liked, but the Frenchman still holds on to the 250 Class lead.
Courtesy Steve Cox/Racer X

Despite an apparent shift in momentum atop the MotorcycleUSA.com Women's Motocross Championship, current championship leader Jessica Patterson and her DNA Shred Stix/Star Racing Yamaha team made a statement at Southwick with arguably the strongest performance of the entire 2010 season. Patterson claimed her fifth overall victory by overcoming trouble early in the day to maintain her 22-point lead over reigning two-time champion Ashley Fiolek of the Honda Red Bull Racing team, who in recent rounds looked to be closing in on her rival. As the eight-race championship heads to its penultimate round at Steel City, Fiolek will look to leave it all on the line throughout the final four motos in hopes of achieving the three-peat.

For nearly two decades, Steel City Raceway has been a Labor Day tradition of American motocross. The pristine facility just outside Pittsburgh has hosted some of the most memorable championship battles in the history of the sport while also serving as the site of many historical moments. It's lush natural terrain and picturesque setting provides a variety of challenges for the world's best riders while also catering to some of the most hotly-contested competition on the schedule. As always, the Coombs family is pulling out all the stops to make this season's layout one that will keep the fan's on their feet.

Back-to-back same-day coverage of the FMF Steel City National can be seen on Saturday via tape delay exclusively on SPEED. Beginning at 8 p.m. ET, the 250 Class will kick-off two hours of American motocross action, followed by the 450 Class at 9 p.m. ET. As always, a live stream of the first motos of each class can be seen at www.allisports.com/motocross The online coverage begins shortly before the opening race at 1 p.m. ET.