MORGANTOWN, W.Va. (August 24, 2010) - MX Sports Pro Racing announced today that FMF, the leader in aftermarket motorcycle exhausts, will serve as the title sponsor for the FMF Steel City National on September 4, the penultimate round of the 2010 Lucas Oil AMA Pro Motocross Championship. The Labor Day tradition from Delmont's Steel City Raceway, which is just minutes from downtown Pittsburgh, will be as memorable as ever as the world's best riders got bar-to-bar across three professional classes.

Tickets to the FMF Steel City National are on sale now through AlliSports.com and RacerProductions.com. Race day tickets are just $35 for adults and $20 for kids! Additionally, a one-of-a-kind VIP Package is available, but it's going fast. The VIP experience provides two days admission, first class amenities and the best seat in the house! MX Sports Pro Racing is also offering FREE pit passes to all fans that purchase their tickets in advance. 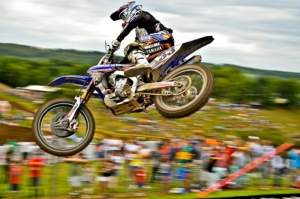 Josh Grant rides for the FMF-backed Muscle Milk/Toyota/JGR team and currently sits fourth in the 450 Class championship with one moto win in 2010.
Courtesy Steve Cox/Racer X

FMF has been a long time supporter of American motocross. Their presence at the nationals is unmistakable whether it's the bright red race support rig, the iconic oval logo or the seemingly hundreds of bikes boasting the sound of their pipes. By stepping up to be the Steel City round's title sponsor, that presence will become even greater.

"We're very excited to serve as the title sponsor for the Steel City event," said FMF's Donny Emler Jr. "FMF has been a supporter of the AMA Pro Motocross Championships for over 15 years and the grassroots of the sport is a perfect fit for our brand. Steel City is one of the best facilities in the country and always produces stellar racing and the attention to detail from the promoters is second to none. Additionally, the Labor Day holiday means families have one more weekend to get out and enjoy themselves before kids get back to school and we want to be a part of giving them a memorable experience."

Rockstar/Makita Suzuki's Ryan Dungey is in the midst of a record-setting rookie season in the premier 450 Class and appears to be on his way to claiming the 2010 title. However, San Manuel Yamaha's James Stewart has returned to the outdoor nationals and after his first motocross race in nearly two years at Unadilla, he knows what it's going to take to beat his former prodigy. As the season winds down, all eyes will be on the showdown between two of the sport's biggest stars and at Steel City where both riders have had success, the battle could be legendary. 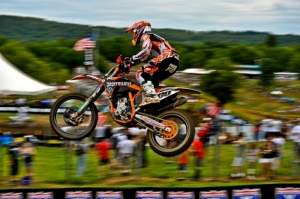 Additionally, the wildly competitive and unpredictable 250 Class has an international title fight on its hands as Frenchman and Monster Energy/Pro Circuit/Kawasaki rider Christophe Pourcel has his hands full with Oklahoman Trey Canard and his GEICO Powersports Honda machine. With four straight victories, Canard has arguably been the hottest rider in the series, climbing from fourth to second in the points over the last three rounds. After a forgettable outing at Unadilla for Pourcel, Canard is within striking distance of the championship lead and will look to make up even more ground at Steel City before heading into the season finale.

The MotorcycleUSA.com Women's Motocross Championship will also be in action. So far in 2010, it has been a head-to-head battle between the class' two most successful riders as reigning champion Ashley Fiolek has had to endure an exceptional challenge from five-time WMX champion Jessica Patterson. Through five rounds, Patterson and her DNA Shred Stix/Star Racing Yamaha team have the edge, but Fiolek and Honda Red Bull Racing are on the charge in their quest for a third consecutive title. After one of the most dramatic races in the history of the division at Steel City one year ago, fireworks will be sure to fly again as the title fight comes down to the wire.

The race marks the final opportunity in 2010 for motocross fans throughout the East Coast to see the world's best riders in person. With autograph sessions scheduled, an up-close-and-personal look of what happens behind the scenes in the pits and the best racing on the planet, it's fun for the whole family and something any enthusiast surely won't want to miss!