MORGANTOWN, W.Va. (August 24, 2010) - Following the Lucas Oil AMA Pro Motocross Championship's last round from Unadilla, the world's best motocross riders enjoyed their final off-week of the 2010 season. This Saturday, August 28, Rockstar/Makita Suzuki's Ryan Dungey and GEICO Powersports Honda's Trey Canard, the series' two hottest competitors, lead their rivals into the 34th annual Rockstar Energy Southwick National, presented by Traxxas, at the legendary Moto-X 338 in Southwick, Mass. This will mark Round 10 of the series, and the American motocross tour's one and only sand race.

Even with the highly-anticipated return of San Manuel Yamaha's James Stewart. Dungey continued his dominance of the 450 Class, grabbing his eighth consecutive victory at Unadilla. It was also his sixth moto sweep of the season, overcoming not only Stewart's long-awaited return, but also Grand Prix competitor Clement Desalle, of Belgium, along the way. As a result, Dungey extended his championship lead over Honda Red Bull Racing's Andrew Short to 111 points and can clinch the title on Saturday if his day ends with his advantage at 100 points or more. 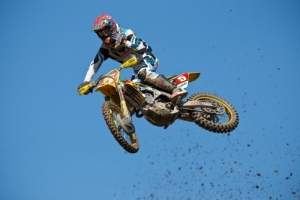 Ryan Dungey has the opportunity to clinch the 450 Class title this weekend at Southwick.
Courtesy Simon Cudby/Racer X

With a race under his and the San Manuel Yamaha team's belt, many expect Stewart to return to his old form in the sands of Southwick after an up and down performance at Unadilla. The 2008 AMA Motocross Champion won at the legendary facility during his title run and has placed well there in the past. Also looking to make his presence felt at Moto-X 338 is New England motocross legend John Dowd. At 45 years of age, Dowd is still arguably one of the best sand riders in the world and proved it last season with a stellar third place effort against riders as much as 20 years his junior. The Rockstar Energy Southwick National remains the only national event in which the semi-retired Dowd competes.

While Dungey stands atop the premier class, the battle for the runner-up spot in the championship remains intense with Andrew Short and GEICO Powersports Honda's Brett Metcalfe. The pair has traded podium results throughout the season and currently, only 14 points separates the red riders. Short's experience at Southwick has produced mixed results over the years, though he did win there as a 250 Class rider. Saturday's race will serve as Metcalfe's debut ride in the 450 Class at Moto-X 338; the Australian is a savvy sand rider with overall podium efforts at the facility the last two seasons.

Since turning pro in 2008, Trey Canard has never competed in the sands of Southwick due to a pair of season-ending injuries. No matter, thanks to his incredible four-race winning streak the Oklahoman's drive to win and the belief in his ability is higher than it's ever been during his young career. With a major points swing last weekend that allowed him to close to within 16 points of 250 Class leader Christophe Pourcel, Canard knows now more than ever that anything can happen, particularly in the smaller displacement division which has produced exceptional competition all season long. 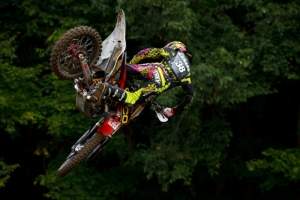 Trey Canard is looking to extend his win streak to five-in-a-row at the sands of Southwick.
Courtesy Simon Cudby/Racer X

For Pourcel, his come-from-behind ride aboard his Monster Energy/Pro Circuit/Kawasaki in the final moto at Unadilla served as a statement to his surging rival that he still holds control of the championship. However, a tough outing at Moto-X 338 one year ago proved to be a difference maker in the outcome of the 2009 title and will surely be in the minds of Pourcel and his team on Saturday. In any case, with only three rounds remaining, this closely-contested battle is sure to lead to some memorable action throughout the rest of the season.

After taking a break for the past two rounds, the MotorcycleUSA.com Women's Motocross Championship returns to action with Round 6 of the eight-race season. DNA Shred Stix/Star Racing Yamaha's Jessica Patterson captured her fourth win of the 2010 season the last time the nation's fastest females competed at Spring Creek in Minnesota. Patterson currently holds a 22-point lead over reigning two-time champion Ashley Fiolek. Despite what has been a tough season by her standards, Fiolek knows a third straight title is still within reach for her and the Honda Red Bull Racing team and will look to turn things around starting on Saturday. Along with her four wins, Patterson holds the upper hand at Southwick, having won at the track last season in a dominating 1-1 performance. 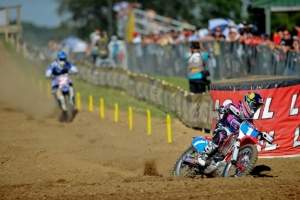 Affectionately known as the "Sandbox," Moto-X 338 has been a staple of American motocross since 1976. It remains the one and only motocross national ran in the sand and regularly provides a unique challenge for the riders and exceptional racing for the fans. This season, the facility is offering a one-of-a-kind opportunity for two lucky fans to take home their very own mini replica of the same Rockstar Energy Southwick National event trophy that will be hoisted by the winners on Saturday afternoon. Additionally, WEEI Sports Talk Radio will raffle off a pair of Boston Celtic tickets for the upcoming 2010-2011 season at the race. For more information on both contests, contact the track at 413-569-6801.

Back-to-back same-day coverage of the Rockstar Energy Southwick National presented by Traxxas can be seen on Saturday via tape delay exclusively on SPEED. Beginning at 9 p.m. ET, the 450 Class will kick-off two hours of American motocross action, followed by the 250 Class at 10 p.m. ET. As always, a live stream of the first motos of each class can be seen at www.allisports.com/motocross The online coverage begins shortly before the opening race at 1 p.m. ET.