When it rains it pours. And in Monster Energy/Kawasaki off-road racing great Destry Abbott’s case … it also lightnings.
Battling injury and tough luck since the Dec. 31st clock struck midnight on 2009, fan-favorite motorcycle off-roader has had a time of it in 2010. But nothing comes close to for any of the sport’s athletes with what Abbott went through a couple weeks ago near his home in Flagstaff, Ariz.
Out trail riding with his son Cooper, 12, the Abbotts were in the pine-lined trails in the foothills above Flagstaff when a storm came raging in through the valley. The two took cover amongst the trees in an effort to wait out the storm and torrential rains. And no sooner did Destry lean his bike up against a tree than did the world collapse in on him.
"I’d leaned my bike against a tree to get it out of the rain – and was leaning on the tree myself – when it hit," said Abbott of the freak lightning strike, which the U.S. National Weather Service lists as roughly 1-in-700,000. "The next thing I know I’m laying face down on the ground in the mud." 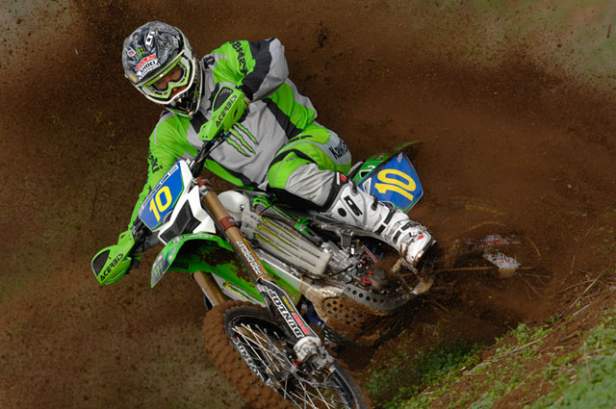 Dazed and confused, Abbott would come around to the sounds of Cooper screaming and crying, unaware of what had just happened. "I had all my gear on, my helmet. So when I came to I figured I’d just had a crash. I’m on the ground, laying there and just hurt like hell – had the wind knocked out of me and couldn’t see out of my left eye, completely blind there and could barely see out of my right eye."
"Dad! Dad! The lightning just struck," Cooper kept yelling, obviously freaked out at the condition of his father, not to mention they were miles from anywhere in the rugged Arizona countryside. Cooper’d been knocked off his feet as well, but he was like 50 yards away at the time and – thankfully - didn’t get near the same charge Destry did.
Abbott’s one of the world’s top off-road racers, so he knows what its like to hit the deck, get up, and shake off the cobwebs, gather your faculties and take inventory on what’s hurt – and maybe hurt bad. But this was nothing like any crash he’d ever taken, and it scared him.
"When I came to I was confused. Had no idea what had happened or where I was at. I started thinking ‘OK, I’ve fallen. I’ve fallen a number of times like this … but never to where I couldn’t see out of one eye."
Abbott said he went as far as to pinch his left eyelid and pry it wide open – only to have things still completely black. And it stayed that way for a good half hour. "Once it really set in what happened I was very concerned about Cooper, more so than myself," said Abbott. "I tried starting my bike, but it was making some weird noises, obviously affected by the lightning as well." 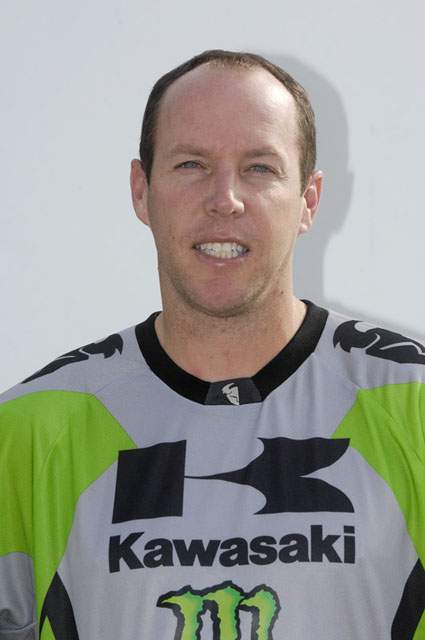 Photo Courtesy Kawasaki
Abbott finally managed to get himself and Cooper on Cooper’s bike and the two rode out towards nearby I-40 for help. On the way he was able to use his cell phone and contacted his wife, who you could imagine was pretty freaked out as well.
"All I could keep thinking is ‘Man, I’m through being able to do one of the things I love to do.’ And as it turns out Destry’s eye sight was the least of it, explaining that the lightning strike was getting hit by a giant defibralator.
"The weirdest thing, though, was what happened to is my heart rate," he explained. "I got hit – my heart stopped for a moment – then started beating again. Only when it started back up the length of the rate changed."
Abbott, relaying multiple physicians’ explanations, said that the charge that hit him threw off his heart’s electrical mapping – elevating his heart rate to 202 to 203 beats a minute, or his peak numbers when banging out motos. "And that was just insane," he said.
Back to the actual strike, when pressed, Abbott said that he went through an amazing out-of-body experience – one that you could hear his voice trembling when he re-told the story: "I do totally remember leaning against the tree. Then I had this weird feeling like I was totally flying … flying away, like a waaayyy scary feeling. Then the next thing I know I’m on the ground, but I don’t remember hitting the ground."
Update: Abbott’s left eye is getting better, although he still has a lot of difficulty with peripheral vision at night (He jokes "There’ll probably be no Baja Designs Night Race for me at the Vegas EnduroCross," an indoor race using headlights and run with the arena lights off.). He still has a noticeable mark in his left eye, where his doctor says his retina was torn. And his heartbeat is a bit jacked up, but again, doctors say that should correct itself in time - adding the cryptic ‘the lightning strike kind of re-set your (Destry’s) body’s electric programming.’ 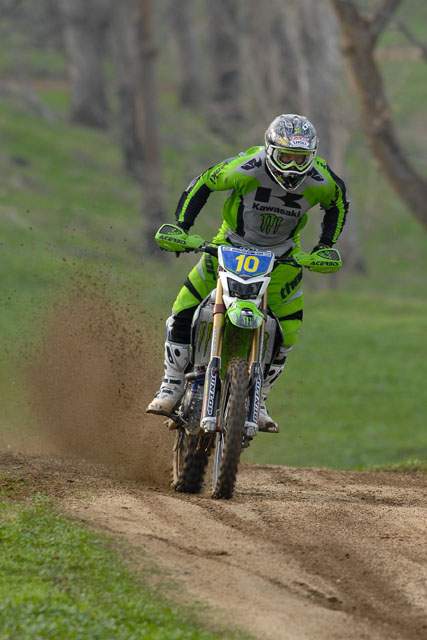 Photo Courtesy Kawasaki
All-in-all it’s about as hardcore a story as you’ll hear in the tough-assed world of off-road motorcycle racing. Abbott’s pumped he’s getting better – and expects to recover fully. He’s even more pumped that Cooper was unhurt.
Said Abbott in closing: "I don’t really know what it feels like to be close … but that was for sure the closest I’ve ever been."
Read Now
November 2022 Issue Now Available