Coronado, CA - Nearly 1,500 of the nation's best motocross racers have blown into Hurricane Mills, Tennessee this week for the AMA Amateur National Motocross Championships. Held at the historic Loretta Lynn Ranch, the talent for the field has never been deeper, setting the stage for the next generation of superstars to emerge from a battle royale. In addition to the crop of up-and-coming kids, there are also some experienced veteran motocross racers taking to the track as 35 classes will be contested in a total of 99 motos during this epic event. 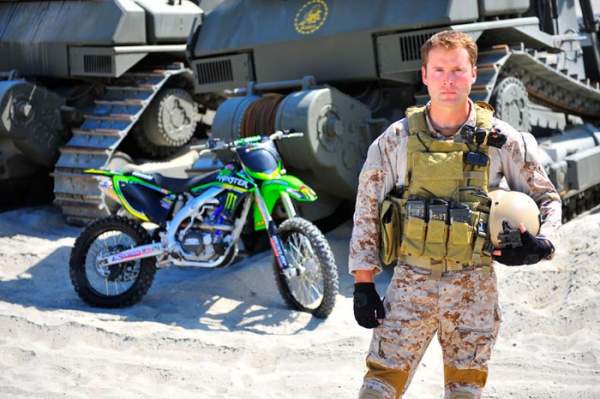 One rider returning to Loretta Lynn's 25+ and 30+ age classes is Navy SEAL Stacey Virgin - a man not unfamiliar with overcoming seemingly insurmountable odds and accomplishing things that most of us only read about in adventure novels or watch on the silver screen. A 12-year SEAL Team veteran, Virgin currently serves as an Operations Chief for SEAL Team 5 based in Coronado, California. Never knowing where the next call to action may take him and his men, you can count on the fact that SEAL Team 5 is well prepped and always ready to go.

The good news for Virgin this week is that his sole mission is to test himself against other top racers rather than storming a beach or landing in a hot LZ somewhere. "I thought SEAL training was tough, but getting ready to race back here in Tennessee has been a real challenge," he jokes. Of course in customary over-achieving fashion Virgin scored 3rd overall in both the 25+ Area and Regional Loretta Lynn's Qualifiers against much younger riders and was 2nd overall in the 30+ class in both preliminary rounds.

Logistics for Virgin's assault on Loretta Lynn's were another hurdle to overcome. First his SEAL Team command had to allow him to schedule leave time to coincide with this week's racing after which some of the biggest names in motocross stepped up as a salute to this SEAL. In place of Virgin's own thoroughly worn out 450 motocrosser, Kawasaki's Tom McGovern came up with a new 2010 Kawasaki KX450 which immediately was placed into the capable hands of those patriots at Pro Circuit Racing. The new machine received engine and suspension work and an assortment of factory level mods. With a nod from Mitch Payton, the Pro Circuit troops were led by Mitch's brother Jim, himself a Navy Reservist helicopter pilot, who made sure Virgin's new KX450 was in top form.

Putting that Pro Circuit power to the ground are fresh Dunlop knobbies, thanks to Dunlop's own Broc Glover. Troy Lee Designs then stepped in to supply Virgin's racing "uniforms". "Naturally when we heard about Stacey Virgin, we wanted to become part of the effort," says TLD GM Bob Weber. "We are honored to be able to participate in his campaign and wish him luck at Loretta's."

Ever since Dave Coombs Sr. and Paul Shlegel founded the AMA National MX Championships back in 1982, the race has honored the all-American goals of fairness, safety and fun, delivering a priceless motocross experience to thousands of families each summer, according to AMA Director Of Racing Joe Bromley. "The AMA Amateur National Motocross Championships have represented the pinnacle of amateur motocross for nearly 30 years. They are the proving grounds for tomorrow's motocross superstars... the future of the sport will literally be on display in the Tennessee dirt for the next week," believes Bromley.

Perhaps nobody said it more succinctly than Pro Circuit's Mitch Payton, "Thanks to good men like Stacey Virgin and his fellow SEAL Team members making the sacrifices they do, motocross racing is still something we can enjoy as Americans."

For additional information and biography on Stacy Virgin, click here.