PERRIS, CALIF. – Surfercross has been going strong for 11 years now, with no signs of slowing down. The Toyota Surfercross presented by Muscle Milk will take place on Monday, August 9 at Starwest MX Park (Perris, Calif.) and Tuesday, August 10 at San Onofre State Beach, trail 6.  The event will be shown as a segment during the live NBC broadcast of the Unadilla National on August 14, 2010, as well as on allisports.com.

While event participation is invite-only, fans are welcome to come out and watch the athletes moto and surf. "Anyone can come watch the moto day or surf day," said event co-creator Jeremy Albrecht. "We’ve always kept it pretty low-key and the fans that have come out have been very respectful of that."

The Pro class is invite-only, and this year’s roster includes professional AMA and FMX riders such as Josh Grant, Justin Brayton, Robbie Madison, Tara Geiger, Sarah Whitmore, Sean Borkenhagen and Michael Sleeter, as well as former top riders Jeff Emig and Jeff "Chicken" Matiasevich. This year’s overall winners will receive one-of-a-kind engraved guitars, courtesy of Fender. The famed guitar company will be giving away a total 12 guitars at the event. Skull Candy and FMF will also give custom trophies for the surf and moto winners.

In addition to the Pro class, there are close to 50 spots open for people from both the moto and surf industries to compete for trophies and bragging rights. It’s a first-come, first-served format, and there’s always a long list of alternates hoping someone doesn’t show.

The Toyota Surfercross presented by Muscle Milk is sponsored by Oakley, FMF, Asterisk, Shift, Wahoo's Fish Taco, N-Style, Starwest Motocross Park, Skull Candy, Fender, Yamaha and Kawasaki. Created by Jeremy Albrecht and Mike Parsons, Surfercross has become an event that many pros look forward to each year – it’s a laid-back, no-pressure event that combines the overlapping interests of many surf and moto athletes. 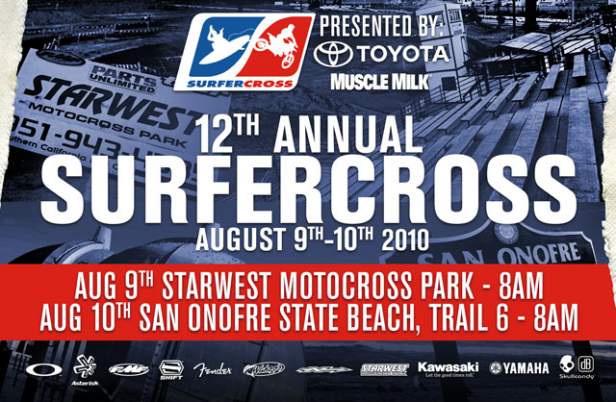