GEICO Powersports Honda’s Kevin Windham is making a return to racing this weekend at Millville, but it’s not with his GEICO team, but rather as a fill-in for Davi Millsaps at the Honda Red Bull Racing team. We got him on the phone today for this Monday Conversation.

Racer X: You’re coming back to the nationals this weekend at Millville... When the ball was rolling like it was at the end of the supercross season, is it kind of hard to go home and sit around the house?
Kevin Windham: Yeah, the racing was going quite well at the end of Supercross 2010 and it was something that we hated seeing. When you focus on just one series and you watch that finale in Vegas rapidly approaching, it’s a lot easier mentally. I think a lot of guys, we kind of feel like it’s the halfway point in the season, not the finale. Your whole mind frame switches after Vegas, and you have training and bike setup and all that stuff. I wanted to continue racing in Supercross. It was going good.

So how did this go down that you ended up with this offer to race outdoors in place of Davi Millsaps?
Well, I had showed some interest earlier in the season to try to do some outdoors and we just weren’t getting things put together. When Davi went down and had his injury, my name kind of went in the hat of potential riders there for Davi’s bike with the Red Bull Honda team. When I got the call, I thought about it a little while and it sounded like a good deal. It sounded like a lot of fun. I feel like we’ve got a good shot of going out there and finishing respectably, and I think that’s kind of all it takes. It would be really fun to do well, and if we don’t, it’s just not going to be that much fun. We’re in a lot different situation than we were last year when I went out and did the nationals on the Lites bike. I’m looking for some good results here in Millville and beyond.

We’ve talked a lot in the past about the whole "stock suspension" thing at the Factory Connection team, but you’re not going to be doing that on the factory bike, right?
Nope, it’s a full-factory rig and we just went out and did testing last week and I was surprised. Everything was in order and we made very minimal changes. I think the bike’s working well for me and looks very balanced and has great power. I’m looking forward to getting out there on it. It’s an exciting time for me and a great opportunity.

What do you actually expect from yourself, considering how it ended in Supercross? I’m sure you have been following the series...
I have. It seems like we had a few that were really brutally hot. I heard some of the guys it took them a couple weeks to recover and just in conversations I’ve been hearing, it seems like some of the races have been really difficult. I don’t really know what to expect. I’m trying to be realistic in the fact that when I go test and when I ride, I know what it feels like to rail a corner and I really feel like my entry speed is great and my exit speed is good. I feel like I’m hitting my marks and stuff, but the last time I’ve really been competitive about racing Nationals was the end of ’07. It’s a lot of time between then and now, and like I said earlier, I don’t want to put any focus on what I did last year because, to be honest with you, we kind of played around with the Lites bike and that obviously wasn’t working well for us. I really feel like when you’ve gone fast, you can go fast again. It may take a couple of weeks. I really don’t have huge expectations. I’m anxious to get going and really see where these guys are. There are a bunch of the talented racers on the track right now I’m positive doing some riding and trying to prepare, but that’s obviously a little different than racing. 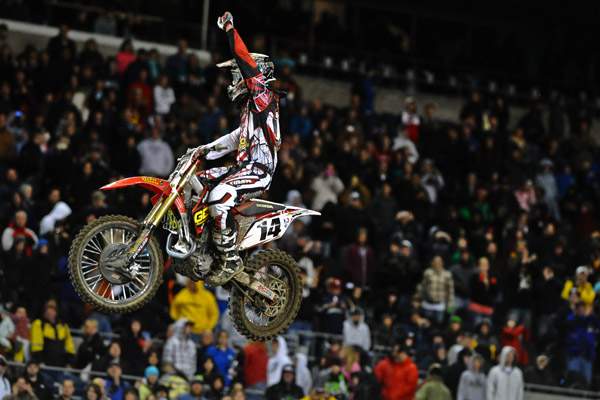 The last time you were racing full-time, you won the last moto at Glen Helen, didn’t you?
Yeah, the last moto. I went down in the first moto and think I got third or fourth. I went like 4-1 for a podium position but was in great position for winning the overall. I just really went out with a bang. That was a great race and especially being at Glen Helen where I kind of made the comeback from my little hiatus back in ’02. It’s a special place and a good way to end out. It turns out it wasn’t the end, so hopefully we find a good way to end it this year at Pala and kind of make some headway between now and then.

How are you guys handling the sponsorship stuff? Is it similar to what Trey Canard did in Supercross?
Yeah, it’s identical to it. I’m carrying all of my clothing sponsors like MSR and DVS, Shoei, Spy, Gaerne... At this point, it was just a nice opportunity for me to go and ride for the Red Bull Honda team. It was great for the guys at Factory Connection to allow me to do it. We worked really close together all season with factory Honda. There were huge areas of development that Honda helped us out with, and I think that’s cool. We’ll work hand in hand and it’s a great opportunity for both sides to be out there. It’s great for me and I’m looking forward to representing both. I’ll have GEICO signage on me, but obviously I’m going under the Red Bull Honda tent and I look forward to that opportunity as well.

I believe you were still planning on doing X-Games, right? So how does that play out when you’re going to be riding for the Red Bull team outdoors for the next couple weeks before that?
Well, this commitment has actually brought me in for more races, and at this point I’m actually feeling like I really need to pull out of the X-Games and continue to focus and ride [outdoors]. I mean, we’re going to be two rounds in, four to go for me personally [when the X Games happens] in the outdoor season. I can probably really use that two-week break to better myself for the remaining four. So, I’m trying to make sense of it right now, but it’s looking like I’ll probably pull out of X.

I figured that was going to happen. It seems like it would almost make you schizophrenic; you go outdoor riding, then two weeks in you switch, then switch back...
Yeah, once I made the decision – the opportunity presented itself and that’s the direction it tends to go – it obviously changes some things. Like you said, I’m just trying to learn a whole new area and I’m trying to take the speed up to the levels that I need to in order to be competitive in outdoors. You’re carrying so much more speed and momentum outdoors. Right now, it’s definitely a focus on that.

So what are you doing between now and next weekend?
I just got back from testing in California. I landed on Friday evening, rode Saturday morning then flew back out Saturday afternoon for a Tucker Rocky/MSR dealer show in Dallas. I just got back from that this morning. I’m taking the day off, the rest of the day, and getting back at it hot and heavy tomorrow and will try to find that happy medium of not allowing myself to feel like I’m behind the curve being six rounds behind the other guys and avoiding trying to cram it all into one week. My goal is to go into Millville feeling as good as possible and not run down to the point where I was trying to get ready in the amount of time that quite frankly wasn’t possible. I was doing some serious wakeboarding behind the new MasterCraft that I bought and actually doing a good bit of running. That’s my training. Actually, I’ve been training for a marathon with my father-in-law, which was fun. It kept me doing something, but it’s still not riding motorcycles. That’s the biggest thing right now. I just need to take my time. What’s expected of me right now is to just go in there and try my best to let my talent speak for itself and not try to just cram for the test. I’ve got a few more rounds after this to change and improve and take it for what it is and enjoy the opportunity and experience I’m going to get riding for the Red Bull Honda team.