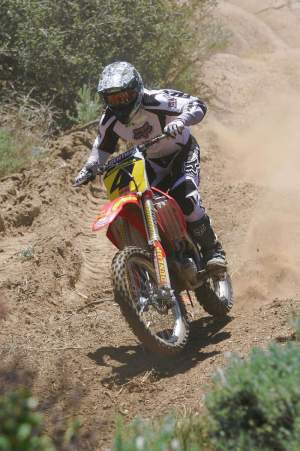 Ryno's getting ready for the USGP. Are you? May 13, 2010 - Glen Helen Raceway, CA - Famed for being one of the fittest racers of all time, Ryan Hughes is coming out of retirement "just for fun" at the forthcoming USGP at Glen Helen, set for May 30th. Given that he has been training America's top motorcycle athletes, "Ryno" is still in peak race shape and every bit the hard-charger he has always been... he has already blown up two practice bikes preparing for the Grand Prix!

"For me, the USGP was 'THE RACE' back in the day," says Hughes. In fact Ryno rode the last USGP at Bud's Creek in 1999. "Eleven years ago I rode a 250 Honda 2-stroke and finished third, just behind Kevin Windham and Stefan Everts and I'm looking forward to racing the USGP at Glen Helen. It's going to be a great experience!"

No stranger to international competition, Hughes was honored to represent Team USA in the prestigious Motocross des Nations three times (1995, 2000 and 2003). In 1996 his formidable performance at the Paris Supercross resulted in him being crowned "King Of Bercy". As happy as Ryno is to be given a chance to uphold American honor, he's concerned that the current crop of American racers may not share his appreciation of the rich history of Grand Prix motocross. "I just don't know what's up with many of America's pro riders today... everyone should be honored to ride for their country!" says Ryno in hopes of encouraging the younger generation to come to join forces with him on the challenging Glen Helen Raceway circuit. Hughes, who turned 37 on April 5th, wants it to be known that he is racing the MX1 class, not the Veterans Cup that will be contested as part of the USGP program.

"People may not expect me to be able to ride at the top level, but when I enter a race, any race, I'm there to win, not embarrass myself in front of the world," notes the coach/trainer/teacher/mentor. Since retiring from full-time racing three years ago, Hughes has focused on opening his Rynoland facility and training top level athletes. WORCS champ Ricky Dietrich, world record holder Red Bull extreme jumper Robbie Maddison, Freestyle motocross pioneer Jeremy "Twitch" Stenberg, 5-time women's MX champ Jessica Patterson, the Star Yamaha Team, Vince Friese, Rally Car champ Ken Block and rising SX stars Jimmy DeCotis and Amanda Mahua are among his clients.

Despite this formidable talent roster, Ryno believes in leading by example. "My approach to training is to be a mirror for my students with the exception that I train harder, I eat better, sleep better and I ride the motorcycle more effectively because I am more sound technically."

Hughes believes that racing is 85% mental and 15% physical and that racers' biggest challenge is focus. "Racers have a difficult time being racers when they need to be: when they race. I teach my racer clients to be racers and nothing else. Forget the girlfriend, the wife, the expensive car, the bank account or what the mechanic did or did not do. I also teach them that they benefit from every experience they encounter during a race: win, lose, or draw it's all good. This approach seems to work for a lot of people." Hughes' own teachings also make him a very credible threat to win the USGP on his Factory Connection/JCR 450 Honda.

One other sponsor of note could be the deciding factor in the race: Ryno Organics. Billed as race fuel for the body, this is Hughes' most recent project. "We are coming out with the Ryno Power supplement line that combines protein/carbs/motivators/VO2... it is the best stuff I have ever put my hands on!" It also works well enough for Rally Car racer Ken Block to make Ryno Organics his primary sponsor. Click on www.rynoorganics.com or www.ryanhughesmx.com for details on his products and the Ryno Institute.

Tickets for "The Race" as Ryno calls the USGP, are available at the www.glenhelen.com, as well as at participating local Yamaha dealers. Reserved camping is available at the track for $50 per spot.