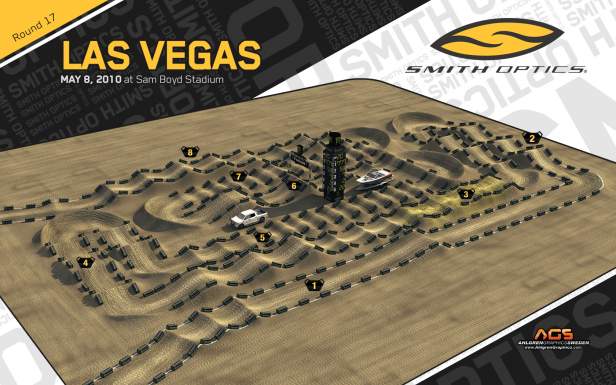 Vegas has a very unique layout, as it’s one of the very few tracks where we go outside of the stadium. Starts are always tricky here, and with the high speeds coming back into the stadium, the start is very critical. It reminds me of road racing or something because you could be in 10th place off the start, but you’re 100 yards behind already.

1- It’s not like a typical, slow-speed supercross where you can see the guys right in front of you. It spreads out. Coming into the stadium, it looks like they’ll triple those first three and probably even flat-land it, depending on how steep that takeoff is, because they’re not going to brake to hit the downside. Then that ski jump, same thing – everyone’s going to launch and as soon as they land, they’re on the binders.

{LINKS}
2 - It looks like, with that kind of turn, the way it’s set up, most guys will sweep the apex of it, like you would in road racing. You come in wide, cut through the inside and then triple those jumps there.

“After that 180, with that first jump being about a three-footer, I don’t know if you’re going to see the guys tripling over the two bigger ones and then tripling out, but otherwise it will definitely be a double-double there.

3 - Sand is okay when it’s on a straightaway, but when it’s in a turn, it gets one-lined. So, turning into the sand here, you’ll probably see people going to the inside and the outside – going to the inside to protect but carry less speed into the sand, or to the outside to rail the berm and launch into the sand. You can never predict how the sand will be because they rebuild it and it breaks down every five minutes. It could be a wild-card spot. But it looks like it’s critical to hop out of the sand section to get over that next single and then double before it looks like another triple.

4 - After that, it looks like a pretty straight-forward on/off, which is usually the fastest way to go, but it’s a good passing spot because guys will go up the inside and do a block-pass at the apex, then roll the first one and double the table over the single.

5 - After that next turn, it’s obviously a double, then in that next straight, it looks like you’re going to have to double in and then go for it into the whoops, and I don’t know if there’s any possibility that you can hop up into the turn off of the last whoop. It doesn’t look like it. It looks like you’ll have to land and then ride up into that elevated turn. But you never know. If you can maybe wheel-tap and then drop into the last whoop and pop out over that next part, that would be fast. But you never know; sometimes they adjust these things a little bit so that guys can do it. That will be a big difference timewise. 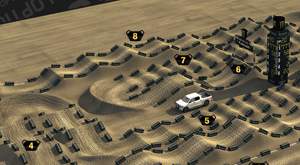 6 -Then, coming out, it looks like you’ll just jump back down off of that elevated turn, and they’ll set it up so you can triple off of it, then hit the finish-line double.

7 - There’s another set of whoops. Vegas whoops are not always the biggest, but they get real dry, cupped-out and slick, so there’s a lot of passing generally in the whoops in Vegas.

8 - This last section seems to be the big, gnarly one in Vegas every year. It kind of looks like maybe the ticket is going to be to double, jump up to that plateau, and then maybe quad out. I think you’re going to see possibly double-double-quad, or maybe you’ll see guys going all the way over, tripling up, and then jumping over that little single down the straightaway. We’ll just have to see what that looks like when it’s built. But there will definitely be some big airtime there. As we’ve seen in years past, there has often been a quad or somewhere that the guys are doing a quad out because you don’t have to slow down for a turn or anything. You’re setting up to head out of the stadium, so you have to have a lot of speed.

With the section that goes outside, you just put your hand on the gas-tank and put your head down and off we go, flat-tracking into that big, flat sweeper. I love that part because I used to ride a little bit of speedway when I was a kid, and I just love power-sliding around that turn out there. This section definitely feels like you can take a breath. I used to do that – just make sure I took a big, deep breath back there every lap – because 20 laps in Vegas is a lot longer than 20 laps anywhere else. It’s like Daytona, where the laptimes are usually over a minute. You definitely need to use the opportunity to take a deep breath, because once you come back into the stadium, I swear the lighting’s different, the crowd’s there... It’s like you step in and out of this world a bunch of times. Focus is critical, and with some of these high-speed sections like the sweeper and the long straights, there is a lot of time to be made and lost. It’s best that you put on your balls and learn how to twist the throttle – but twist it correctly, because if you get too aggressive, you can have a big one on that blue-groove stuff. And that’s why Kevin Windham goes so fast in Vegas, and right now, I’d probably have to put my money on him.

Vegas is cool. I hope it’s not too dry and blown out like it has been at times. The last few years, it seems like these track guys are starting to figure out how to prep for something like this.