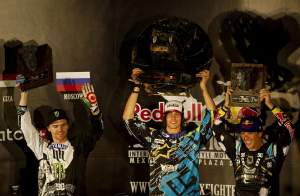 MEXICO CITY (MEX) - A huge crowd of more than 42,000 fans packed the arena to cheer on the twelve FMX toreros on their high-octane steeds as they flew through the largest bullfighting arena in the world under ominous skies. On kickers catapulting the athletes more than 45 feet into the air, the best riders on the planet showcased the very latest freestyle motocross tricks.

The first stop of the Red Bull X-Fighters 10th anniversary year saw a Norwegian rider win an event for the first time. Andre Villa benefited from freak weather conditions including torrential rain, thunder and lightning to take the win after the competition unfortunately had to be abandoned after the first round. This was Villa's first win in major competition.

“I have trained hard my whole life and made so many sacrifices for this,” explained the delighted 27-year-old.

The remaining spots on the podium went to Adams and Maddison, with Spain’s Dany Torres taking fourth place despite being forced to land his tricks with just one hand due to a fractured wrist.

Adams had warm words of congratulation for the victor: “Andre deserved to win here. When it comes to open-air sport, you have to live with the weather conditions. The heavy rain meant the landing hill was very slippery when it came round to my run. I think the decision to abandon the competition was the right one.”

In just a few weeks time, on May 14, the Red Bull X-Fighters will get their chance for revenge at the second World Tour stop directly in front of the world-famous Sphinx in Giza, Egypt. Further stops in Moscow, Madrid, London and Rome complete the World Tour 2010. 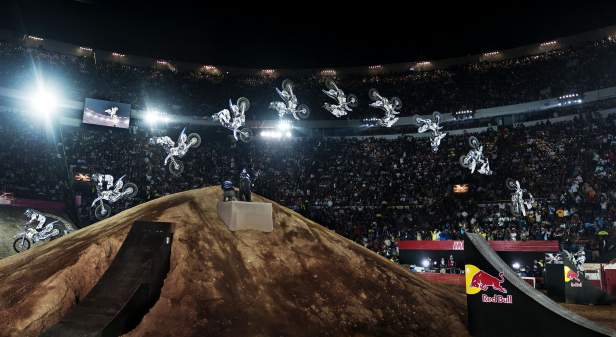