Daniel Blair - Knee
Comment: Out with two torn ACLs. Will not return for supercross in 2010. In the meantime, Blair will work alongside Todd Ballard at NXTagency to further enhance and build the rider management/ representation component of the NXTagency business.

Bobby Bonds: Collarbone
Comment: Will return at Round 4 of the WORCS series in two weeks.

Taylor Futrell - Foot
Comment: The Dragon Racing Fuels KTM rider is having surgery Monday to screw his foot back together so he can be back in time for the nationals

Matt Goerke – Broken Right Leg
Comment: Headed to California this week to start testing for the nationals. “My leg feels pretty good,” Matt told us. “It's taken a while to heal, because of the rod. I can’t wait to get back out there!”

Ronnie Goodwin - Broken Talus
Comment: Ronnie got his cast off on Wednesday, April 7. He has been going to the gym and swimming to get mobility in his ankle back. He should be ready to race at his hometown race in Vegas.

Nico Izzi - Foot
Comment: From team manager Donovan Mitchell: "Nico was going to try and race this weekend in St. Louis, however, the team thought it would be best to keep preparing and focused on outdoors. Just as reported last week, his foot is pretty much fully healed, and he’s riding and training width his new trainer Randy Lawrence."

Grant Langston – Entire body
Comment: Still on the mend and hopes to be ready for Seattle.

Jake Moss – Knuckle
Comment: Out until the motocross season with a fractured knuckle.

Matt Moss – Wrist
Comment: Matt Moss's broken back is healed, but he also had his wrist checked out while he was out with back problems, and it turns out he had a broken navicular. The injury is healing, but Matt is still in a cast and likely won't be back until the outdoor tour.

Dan Reardon - Head
Comment: Questionable for this weekend. From his team manager: "He's still feeling the effects of his brutal A1 crash and we're giving him some time to build some mental and physical strength, we look forward to his return to racing."

James Stewart – Wrist
Comment: From team manager Larry Brooks: "The bone is healing, but it's not strong enough to start riding yet. Just need to make sure the bone is strong when James gets back to riding."

Austin Stroupe - Shoulder
Austin went down in practice in a crash with Kyle Cunningham and separated his shoulder. "I have a third degree AC separation," Austin told us today. "Surgery is necessary. We want to ensure that all is properly aligned to avoid any future complications. I'm so bummed that this happened during the title chase. The Rockstar Makita Suzuki team, Scott USA and everyone worked so hard for me. I hate this for us all." 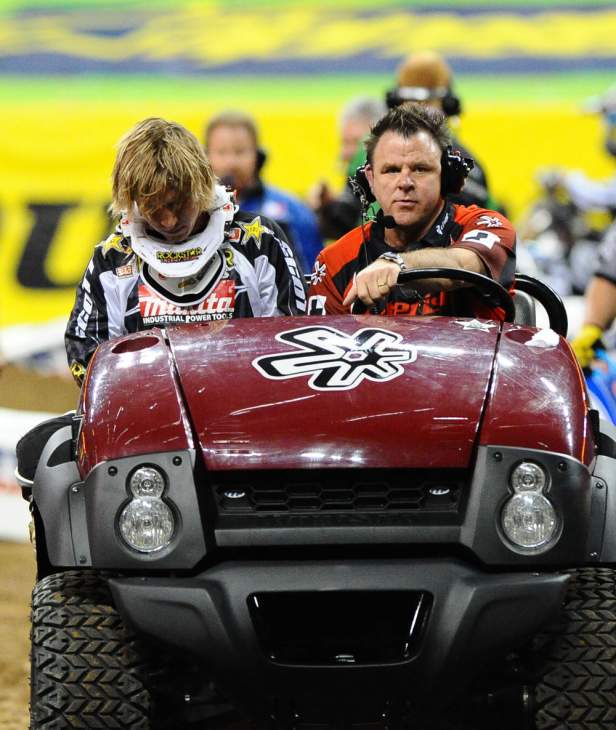 Heath Voss - Knee
Comment: Heath went down in his heat race in Houston and broke his right patella knee cup and sustained a very large cut down to the bone on his knee.