Practice is complete here in Jacksonville, and Kevin Windham has charged to the top of the fast lap list with a blistering 48.791 time in the second timed session. Windham was innovating with a cool jump combo in a table top section, and he edged Ryan Dungey’s 49.182. Davi Millsaps’ 49.395 was third, Justin Brayton was fourth with a 49.626, and Josh Hill’s 49.703 was fifth.

The big news was Ryan Villopoto tweaking his toes and his ankle in a crash early in the first timed session. He did get back up during that session to log a few more laps, but he elected to sit out of practice session two. Considering he’s still in the title hunt, expect Villopoto to still race tonight. But what condition will be anyone’s guess.

It’s also interesting to note that every rider got faster in the second practice session compared to the first.

In the Lites class, Christophe Pourcel was the fastest rider in both timed sessions, and his 49.050 in session two was the fastest overall. Ryan Sipes, carrying momentum from last week, was second with a 49.470, ahead of Martin Davalos, who spent a lot of time at the top of the leader board, just like he did last week. Davalos had a 49.702, ahead of Austin Stroupe’s 50.310 and Justin Barcia’s 50.470.

Stroupe is suffering from a few nagging injuries after last week’s crash-filled main event. For more, check out our news and notes from earlier today. You can also follow coverage of the race as it happens on our twitter account, @racerxonline

All of the riders seem to like tonight’s track and the soil it is made from. Hopefully this leads to some great racing tonight. 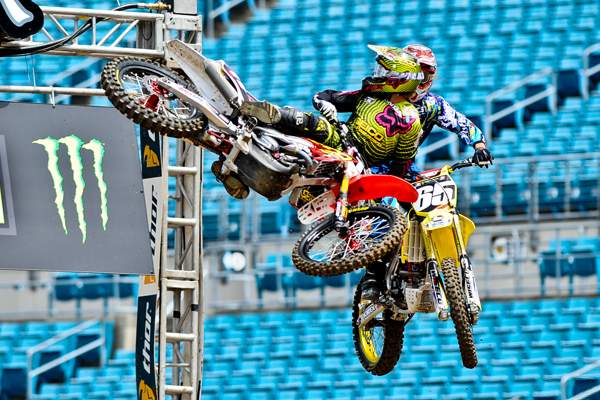