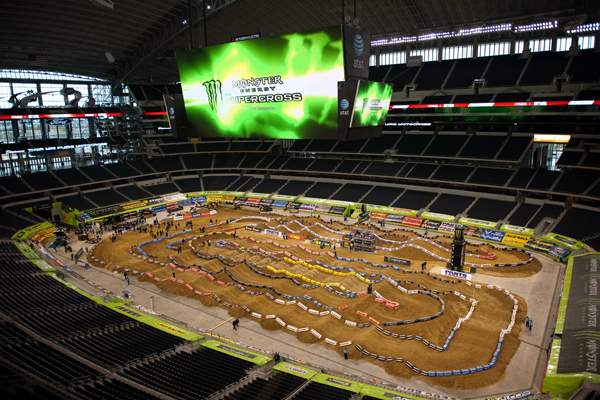 The Dallas Track is quite strange in a lot of ways. Expect quite a few crashes tonight.
Photo: Cox


Practice is complete here in Arlington, Texas. The track is hard and slick, which means consistency will be just as critical as all-out speed. But if you want to know who is fastest, in the Supercross Class, it was Ryan Dungey, who topped the charts with a 48.623 lap, ahead of Davi Millsaps’ 49.359, Ryan Villopoto’s 49.554 and Kevin Windham’s 49.571. Justin Brayton looks rejuvenated after his thumb injury in Daytona, he was fifth with a 49.931.

Trey Canard was sixth fastest, with new 450 entrant Kyle Regal seventh on his Valli Motorsports bike. Regal missed last week’s race while preparing to switch from a 250 to a 450, and so far it looks like a good move. Josh Hill, Ivan Tedesco and Kyle Chisholm rounded out the top ten.

The top of the leader board changed consistently in practice, too, as Dungey didn’t log his fast times until late. Surely several riders are confident they can get in victory lane tonight.

In the Lites class, Christophe Pourcel looked vulnerable again, as several riders went faster than him in the first timed session. But he bounced back the second time out, with his 49.928 leading the pack overall. Austin Stroupe was second with a 49.474. Martin Davalos was on fire in the first session with a 50.553, which led the field until the very end until Stroupe topped it. But while most riders got faster in session two, Davalos actually lost over a second off of his time. Still, his first-session time held up to make his third overall.

Justin Barcia was fourth with a 50.577, and Kyle Cunningham, in his second ride with Valli Motorsports, was a solid fifth with a 50.992. Ryan Sipes, Jake Moss, Matt Lemoine, Troy Adams and Brett Metcalfe rounded out the top ten overall in Lites.

No live TV coverage tonight, the races air in a two-hour block on SPEED tomorrow starting at 5 p.m. Eastern. The SupercrossLive! Webcast is still available at supercrossonline.com And of course Racer X Online will have text and photos available post-race, and you can also follow the action on our twitter account, @racerxonline