This race is known for its dirt, which is usually kind of rutty, but last year was really loose and sandy. It’s the only stop on the tour outside the US. 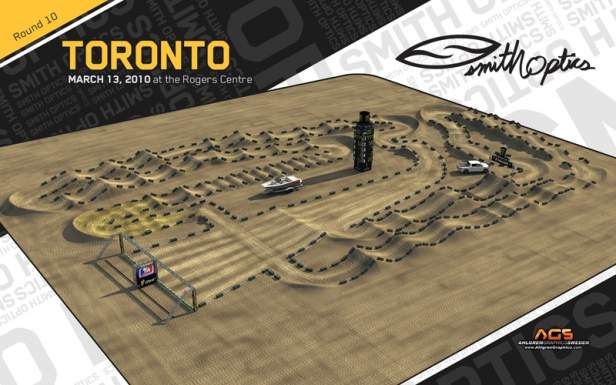 1. Off the start, there’s a hump just after you shift to third gear on a 250F, and the goal is going to be to try and soak it up and get on the ground as quickly as possible and try not to hang out in the air too long. Anything to get back on the ground and drive forward is important, but there’s only so much you can do. It’s not that big of a deal. Then the first turn has a big hump in it, and I’ve never done a supercross start like that. There could potentially be some crashes there. When there are 20 people coming off the starting line, and then because it’s a left, you have to go over a hump, and then right into a tight-right and then another tight-left, I don’t know if that’s the greatest idea. There could be a lot of carnage there, but obviously if you have the holeshot, it’s good, because you can check out and get away right off the bat because everyone else is fumbling around trying not to hit each other.

2. This rhythm section looks kind of weird because it has a bend in the middle of it, so you’ll probably just go double, then table over single, and then if there’s a good enough run, they’ll triple over the 3-5-3 [jumps so named because of their height in feet], and that will give a big run to the triple, and in Toronto the Lites guys have had trouble with the triples because it’s so soft. The bend in the straightaway, if you can call it that, doesn’t really matter much, except that it makes it so that it’s one-lined, because everyone is going to fade from the outside to the inside, then back to the outside into the turn. That kind of makes the next 180 turn sort of one-lined, too.

3. The next section, there’s a bend in that, too, and you never know with the 3-5-3 out of the corner like that whether or not you can triple off of them. Usually, you can’t, but you won’t really know what the fast line will be until about main-event time. However, it will probably be a double out of the corner, then triple up onto the tabletop, then bounce off over the next jump, and then double over into the corner. Then, you make a 180-degree right-hander into some whoops, and if you clean the double before the turn, you’ll want to shift up to third going into the turn, and into fourth coming out of the turn and into the whoops. Depending on how big the whoops are, you might hit the double after the whoops still in fourth, if you’re carrying a lot of speed. But if not, you’ll want to shift to third, and then into second in the air, into that sand section.

4. The sand is always tough, and it usually gets one-lined. This section is going to be worse than most, because it’s definitely going to be faster to square the turn off and come out of the turn on the left side of the track so that you can cut across over the right-hand hump and turn that whole next section into one big arc, instead of all kinds of sharp turns. And the same thing goes for the next turn, because you’ll want to fade back to the right side of the track, where the mechanics area will be, in order to set up a fast line through the turn, because the approaching triple is going to be difficult to jump on a 250F.

5. If you can get over the triple, the next section will be tricky, because even though you can probably do it, you don’t want to triple over that big hump. If you do that, you’ll have to jump the table over the single, which will force you high into the air, losing time. You’ll probably want to double up, then double onto the table, then over the next single. That should be the fastest.

6. This section is going to be one-lined if they build it like this, because if you go to the outside to double up into the rhythm section, you will be forced to either triple-single the rest, meaning you’re jumping a single into the turn and losing time, or double-double into the turn, which will not be that fast. The fast way is going to be to hug the inside on the previous corner, roll the single, then double-triple the rest of the section. Then, you take the left-hander and square it off early in order to straighten out the next section, which shows here to be curved. If you hit it on the left of the track, you can make it almost straight, and that will be fastest, but will make it one-lined yet again. Then there’s a fast 90-degree right into...

7. ...the finish line. This is probably where the bulk of the passing will be done. If you can get a drive over the finish line, you can catch a lot of guys sleeping, as they rail the outside of the turn going back onto the start straightaway to maintain speed, because you can take away their line on the inside and make some clean block-passes there. The only problem is that they’ll have a whole lap to pass you back before the finish.
Read Now
October 2022 Issue Now Available