It was only going to be a matter of time. From the moment that Tanel first rolled out for action in 2010 it was clear for all the world to see that in the LS Honda the Estonian Express had found a perfect foil for his well-documented ability to wring the last ounce of performance out of a motocross bike. After some strong results in Italy in the early season, during which he took the battle to some of the world's top MX1 class motocross riders, the cognoscenti puffed on their pipes and nodded sagely - yes, yes, the victories would surely come. Then last Saturday, whilst wishing your reporter a happy birthday, Tanel quietly dropped the idea on the table that he may very well pull a big result out of his bag of treats at the Hawkstone Park International race as a form of birthday present.

It would be very foolish to take a bet against Tanel Leok in confident mood, and sure enough, on Sunday, he put the hammer down in no uncertain fashion. The Hawkstone Park International is an annual pilgrimage for international motocross riders, big and small, to do a final check on their firepower and that of their bikes before the world championship season kicks off. The world championship elite never let a chance slip to get in this much-needed race practice, and the pits were filled with celebrity race faces as proceedings got underway.

There was still a decided nip in the English air, but Tanel was sizzling. He wrung the neck of his brutally-powerful LS Honda and blitzed to the fastest qualifying time, a full 1.65 seconds clear of the second placed rider. Right. He had established that he has the speed. It was time to see if he could convert it into race results. In race 1, he displayed all the dominance one would expect if Mike Tyson at his prime were to take on Simon Cowell for a quick three rounder. He blasted off the line, surged into the lead, and that was the last that the opposition saw, heard or smelt anything of him. He built up a massive lead, and the rest of the opposition might as well have been in another postal code for the distance that he pulled clear. By the time the flag man called it quits, he had built up a massive chunk of clear, crisp Shropshire air between him and the closest finisher, in fact some 42 seconds' worth of it.

In race two, Tanel had ample opportunity to work on his reputation as the Comeback Kid. An early crash dropped him down to 8th position. Within the space of a lap he was back up to fifth position when another close inspection of the frozen underground dropped him back again. He mounted a massive comeback effort, and with a lap to go he had latched onto the rear wheel of race leader Steve Ramon. He was close enough to the former world champion to exchange whispered secrets if he were thus inclined, but with half a lap to go and victory looking a near certainty, he stalled the bike when trying to overtake. In the time it took him to restart, he lost some positions, and finally crossed the line in sixth position. Yet again he posted the fastest lap time of the race, though, and there was no doubt that, but for the slight mishap, overall victory on the day would have been his. As it was, he finished third overall when the two races were scored together.

The highlight of the day, however, is the Superfinal event. This race pits the best 15 finishers of each of the MX1 - and MX2 riders against each other. Being on smaller machines, the MX class riders get a 10 second head start. Tanel got the best start of the MX1 class, but then had to scythe his way through the entire MX2 field. By this time the MX2 class leader, German wunderkind Ken Roczen, had a near 20 second lead. Tanel was relentless, though, and the afterburners on his Honda were in full operational mode as he hauled Roczen in lap by lap. With three laps to go, he had latched onto the youngster, and on the penultimate lap he burst into the lead. He pulled eight seconds clear of Roczen and had more than 31 seconds' worth of daylight between him and the first MX1 class pursuer, Ramon, by the time the flag fell.

As he doused the excited fans with bubbly, Tanel allowed himself a half smile. For once, all the pieces of the puzzle had fallen into place. The world had better take notice - Tanel Leok is entering the 2010 world championship series with the weapon of his choice, and his sights are set high. Now Tanel's assembled collection of quoted are never going to turn into the world's thickest print edition, since he is not one to blather about, but he was dead happy after his race day, this much is clear. "I am very happy now," he said. "The bike is very good, my starts are better than ever, and I feel comfortable and fit on the track." Team owner Steven Lettani might as well have floated home through the sky for all his glee. "Tanel was insanely fast today. He handed out a riding lesson to the others, posting the fastest lap time in each and every race, and this augurs well for the rest of the season."

And yes, Tanel called it right. The SMS'es that came in as the day unfolded did make for a good birthday present. 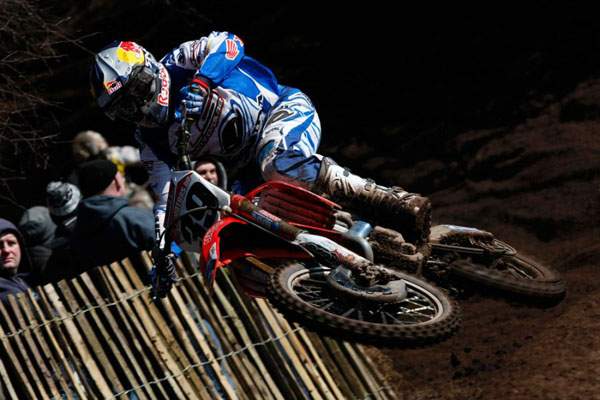 ON THE WAY TO THE WIN. SOME OF THE SPECTATORS ARE WONDERING HOW MUCH LONGER THEY HAVE TO WAIT BEFORE THE OPPOSITION APPEARS IN VIEW
Photo: Ray Archer 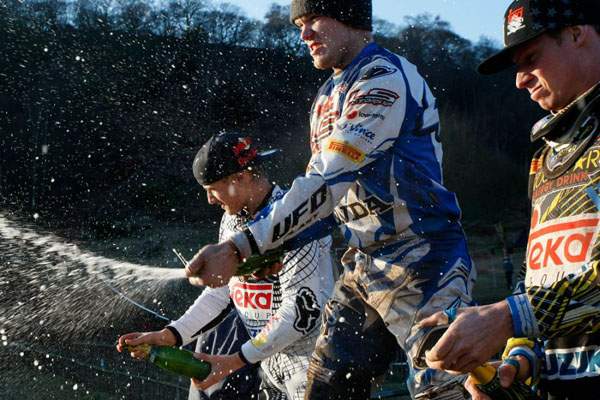