RENO, Nev. (March 6, 2010) – Night two of ArenOcross from the Livestock & Events Center produced another memorable night of racing for the Babbitt’s Monster Energy/Ti Lube Kawasaki team as AMA Arenacross class points leader Tyler Bowers, of Danville, Ky., won his eighth race of the 2010 AMA Arenacross Series season to extend his advantage over the field. GPF Babbitt’s Kawasaki’s A.J. Catanzaro, of Middlefield, Conn., earned his fourth win of 2010 and third in a row to sweep the AMA Arenacross Lites class for the weekend and extend his Western Regional Championship points lead. 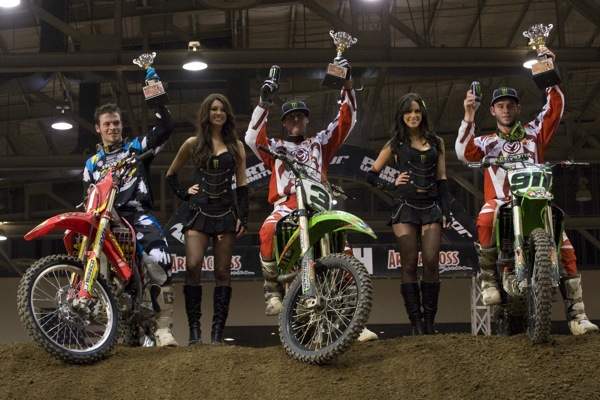 
As the gates dropped on the 25-lap premier class main event, it was once again Spinechillers/Storm Lake Honda’s Nathan Skaggs, of Chillicothe, Ohio, who grabbed the holeshot for the second night in a row. Bowers quickly made his move, taking over the lead and leading the rest of the way. Reigning series champion Jeff Gibson, of Thornville, Ohio, who won his first heat race of the season for Tuf Honda, held down the second position for the majority of the race until night one winner Josh Demuth, of North Richland Hills, Texas, took over the spot just before the finish. Demuth’s runner-up effort minimized his loss to Bowers in the standings while Gibson posted his third podium of 2010.

The 2010 AMA Arenacross Series continues next weekend from the Mid America Center in Council Bluffs, Iowa with two nights of action March 12 and 13. The gates drop on each night of action at 7:30 p.m.

Tickets for all rounds of the 2010 season can be purchased at www.ticketmaster.com and www.arenacross.com.

For more information on the AMA Arenacross Series log on to www.arenacross.com.