For ONEAL, established in 1970, this is a special event as ONEAL has been a long time contributor in the fight against cancer. For this reason, Any 3 series or 5 series Helmets purchased from www.oneal.com on February 13th or February 14th 2010 will have all the net proceeds paid directly to City of Hope for the continued fight against Cancer.

In addition, ONEAL will be outfitting multi time Champion Grant Langston in a custom made set of signature plaid Hardwear race wear this weekend with a pink twist. ONEALS Senior Product Designer Eric 'Rudy' Rudolph said "I knew Grant would definitely want to be a part of the A3 Cancer Awareness considering his own personal battle with Eye Cancer. He loves loud gear, so I decided to go with a custom set of bright Pink Plaid Hardwear Gear made especially for him for this momentous night."

This weekends race event hits home specifically for Multi time champion ONEAL rider Grant Langston. Grant was diagnosed with Melanoma of the eye in 2008, which at the time was considered to be a career ending injury. Grant was able to successfully fight the disease and return to racing in 2010 aboard the J-law Racing/AM-PM/Boost Mobile/Langston Motorsports backed YZF 450. Grant is in full support of the Breast Cancer Awareness theme for this weeks supercross, stating Im excited to see Supercross get involved in a great cause! As a fellow cancer survivor, this helps to get more people aware and involved in fighting the disease. I would also like to thank ONEAL for the special pink gear which will be auctioned off for charity after the race. 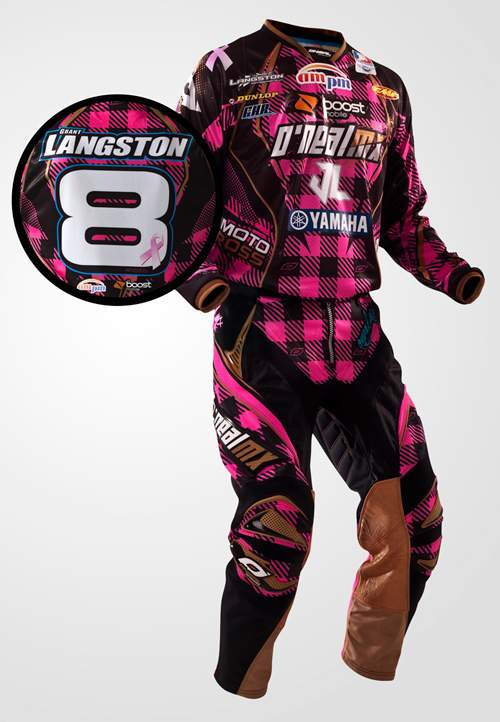