For this week’s Smith Optics Track Walk, we got former factory Yamaha rider Broc Hepler to take a break from watching Family Feud to take you through a lap of the Anaheim 2 track the riders will be seeing this weekend. 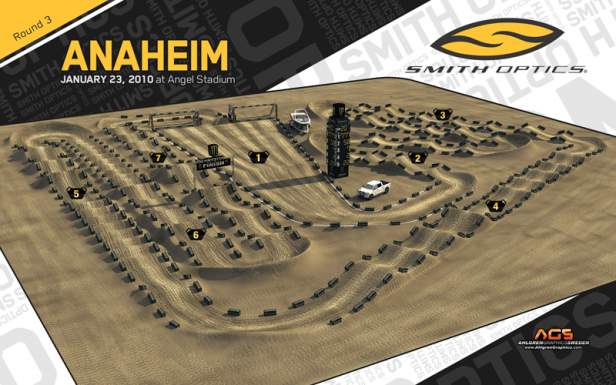 1. It looks like the start is pretty fair on both sides of the gate. If you start on one of the first gates right next to that lane in the middle, it seems pretty ideal because you have a lot of room to move around if you get a bad jump. After the start, you go into two left-handers, and it looks like those will both be pretty flat. Judging by the forecast this week, they may be slippery.
{LINKS}
2. This section looks like a pretty basic section. You may be able to double if you go wide, or do the wheel tap to get over all three. It depends on how big they build them. You then go into a right-hand bowl turn and then into a pretty basic step-on-step-off section. 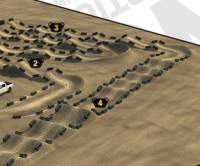 3. Next is a left-hander and then a section with six jumps. I’d say you need to triple at some point in that section, so you might go double-triple-single. I doubt you’ll be able to do triple-triple. A right-hand bowl turn follows, and then it looks like you may just have to double out of the corner, then double-double again, then triple into the corner.

4. Another right-hand turn, which looks a bit elevated because there isn’t much takeoff on that first jump. It may be a bit of a step-down, which you may only get one in, so you’ll have to double then triple to keep your speed up for what looks like a huge quadruple. Even if the jumps are close together, four jumps means big air, so you’re going to have to get that section before the quad pretty clean and then grab a handful.

5. After another right-hander it looks like you’ll have to scrub that first single and stay low to keep your speed up through the whoops, because there’s a triple right after the whoops. I’d say on a 450, almost everyone will be in fourth gear through these whoops, then they’ll click down to third real quick to hit the triple.

6. There’s another right-hand bowl turn after the triple, and then there’s another whoop section, which appears to be right out of the corner. Entering the whoops fast is the easiest way to get in them, so if they’re right out of the corner, it’s going to be hard to gain speed and stay on top of them. It’s going to be really important to hit that turn quick. At the end of whoops you go right into a rhythm section, which looks like a double-triple, but if you carry a lot of momentum through the whoops you could probably triple-double. 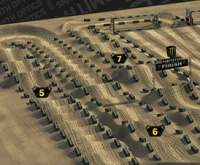 7. Next is a left-hander and then a little seat-bounce double into the finish-line double. After the finish there are four jumps, which may be a triple-single for some guys, or just a double-double. It just depends on how you want to enter that next corner. Then you go into a right-hander, a little straight, then another right-hander, and then onto the start. You’ll want to try to scrub that little jump so you can get your wheels on the ground as fast as possible and get up to speed down the start straight.
*Please note that we've heard that Feld Motor Sports will be changing this section due to the weather and that the track will not be jumping over the gate as pictured.

We also spoke with Broc today about his future plans. “I’m actually starting classes at Butler County Community College tomorrow,” he said. “I’ve been riding every weekend with studs and bark-busters on, so that’s fun. I’ve been doing some light training, but no full-on race training, because I don’t have any plans of racing at the moment. I’d like to maybe do some different events, like a GNCC or an outdoor national. I’m just unsure at the moment and want to focus on being 100 percent healthy. I’m going to make sure I’m race-ready first so I don’t embarrass myself.”