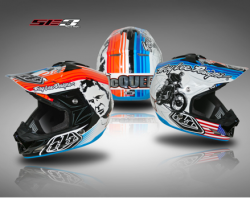 Troy Lee Designs today announced a three-year licensing partnership with the Steve McQueen estate, which is represented by GreenLight (www.greenlightrights.com), to produce a collector’s edition helmet line, to be unveiled to the public for the first time this week. The Troy Lee Designs / Lucas Oil / Honda Racing Team, which includes Wil Hahn and Cole Seely, will wear the helmet at this weekend's Anaheim 1 race on Saturday, January 9 at Angel Stadium.

The new SE3 helmet, which will be on display at the Troy Lee hospitality area at Anaheim 1 and at the Troy Lee showroom in Corona, will retail for $525, with only 700 units going into production. Features of the new SE3 helmet include Dual Density Shock Pad System™, and Dual Density EPS Liner, a newly designed nose guard, air ram top scoop intake, aggressive high flow mouthpiece, and quick-release cheek pads for emergency helmet removal, as well as a McQueen helmet bag.

This will be the first in a series of Steve McQueen™ helmet styles that will roll out over the next three years. The first helmet in the line will be available at select retailers in the U.S. and internationally and online at www.troyleedesigns.com in June 2010.

"My dad was an avid motorcyclist and huge supporter of the sport," said Chad McQueen, Steve's son. "It's great to see his love for motorcycling live on through new collector’s edition helmets."

"I have looked up to Steve McQueen my entire life," says Troy Lee. "I have always held great respect for him and everything he represented. I am truly excited to forge this relationship and look forward to designing a collection that represents Steve's timeless style and personality."

Steve McQueen left an indelible imprint as one of Hollywood's most charismatic leading men.
His balance of masculinity and sensitivity made him both a man's man and a ladies' man all at once. His revered roles in films such as Bullitt, The Great Escape, The Thomas Crown Affair and Papillion have been often imitated but never repeated. An actor, race-car driver and father, McQueen was the epitome of the American dream, rising from hardscrabble circumstances to become one of the most famous movie stars in the world. His amazing life story is chronicled on his official website http://stevemcqueen.com.
Read Now
September 2022 Issue Now Available