This week on the Smith Optics Track Walk I talked to the now injured Monster Energy Kawasaki rider, Tim Ferry. Keep in mind that what he’s proposing here is what the normal riders will be jumping and not an indication of what he himself would actually jump. We all know that he would jump further than any other rider out there this Saturday if it wasn’t for him being hurt and missing the rest of the season. I’m now going to go set myself on fire. 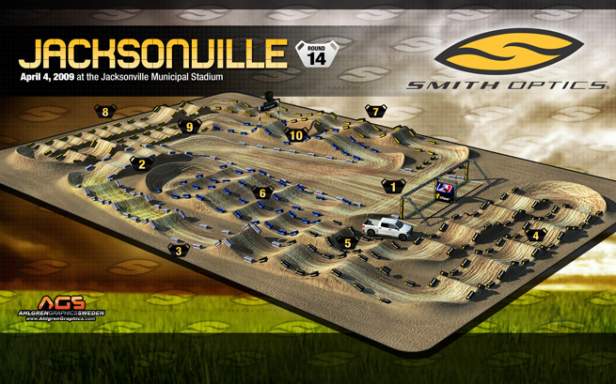 1.) It’s a pretty fair start; I always go between the far inside and the box. I’m not sure what the dirt is going to be like. I don’t think it’s going to be that red clay of Tallahassee, it’ll be whiter dirt but I hope it’s not like that sand they used to have in Orlando. If any rider wants a hot tip, they should watch a Monster Jam from Jacksonville, because it’ll be the same dirt as whatever is used there.

2.) I would think that off the start everybody will roll this, but during the race you can go inside and roll then double-single and stay tight to the inside. If you go outside, you can go double-double.

3.) I don’t know what this is. I’ve never seen anything like it and I have no clue what to do. To me it looks like a… I can’t even tell, really. Have you ever seen this? If I had to guess, you will roll the big jump and then pound through the whoops and then double and hit the triple. The party line might be going outside and tripling everything. I really have no clue. I do know that you need to scrub that next triple.

4.) The next section looks kind of fun. I think you could go two-three or three-two depending on the face of the first jump. That’s a nice bowl turn afterwards where you could set somebody up for the pass. The next section is a double and then all the way over for the 250 guys and a jump on and then off for the 450 guys.

5/6.) After that you would go on-off and then triple into the corner. That’s going to be the fast line. You might be able to go all the way over and then triple-single into the turn, but that’s not going to be faster in my opinion. After that you triple out of the next corner and go across the start line and try not to take out too many mechanics.

7/8.) I think you want to stay tight in the next corner so you can sit down and jump the triple. Then it looks like it goes three into the corner, the only thing is that turn is flat and could be hard to stop. This is just like Atlanta where you couldn’t stop for the turn; same part of the stadium also. You could actually double-single to the inside, depending on the dirt and the traction. Then you’re into a decent size set of whoops and then a bowl turn.

9.) I think you’re going to be able to jump over and then jump all the whoops. Depending on how many they actually have, that is. Maybe you can jump into them, wheel tap, and then you’ll be out of them after that.

10.) You can get pretty nasty on this finish line. It looks like it’s big and fun with lots of room. The corner after you can go inside or outside and it’ll be pretty equal, I think. The weather this time of year is supposed to be dry, but I heard they’re calling for rain which would throw a wrench into anyone’s giddyup.