AURORA, Ill.  – Another exciting chapter of the 2009 Monster Energy® AMA Supercross, an FIM World Championship, will unfold this Saturday at Jacksonville Municipal Stadium for the first time in the sport’s history, featuring the hotly contested interstate rivalry between Tampa’s Chad Reed and Haines City’s James Stewart. 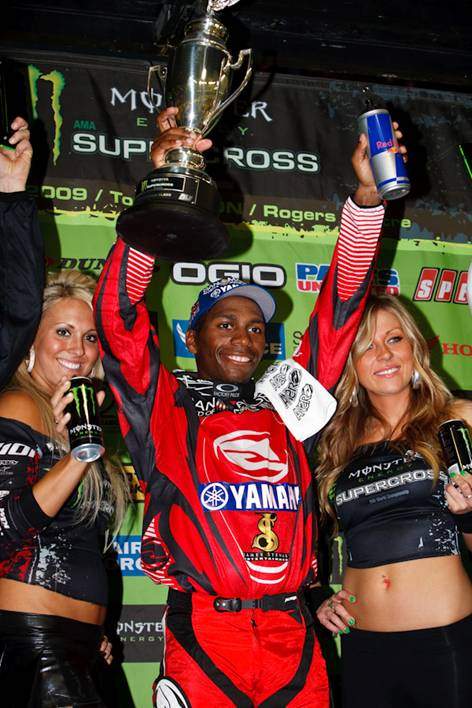 Stewart will be the featured rider at this week’s media day on Thursday, April 2 from Noon-2:00 p.m. inside the Budweiser Zone at Jacksonville Municipal Stadium. 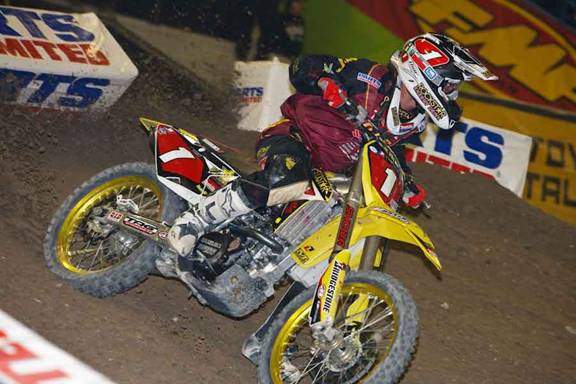 Heading into the inaugural race in Jacksonville, Chad Reed is looking for a win
Photo Credit: Simon Cudby

“Every week it’s 100 percent,” said Stewart. “Everyone makes mistakes once in a while but it’s a long championship and there’s gonna be drama all the way to the end. I went too far inside (on the start) but it worked out and then I turned it on. I want to thank all my guys at San Manuel. We’ve been working hard all week to get here. At the end of the day, I know me, my team, and everyone involved are giving 100 percent and that’s all we can do.” 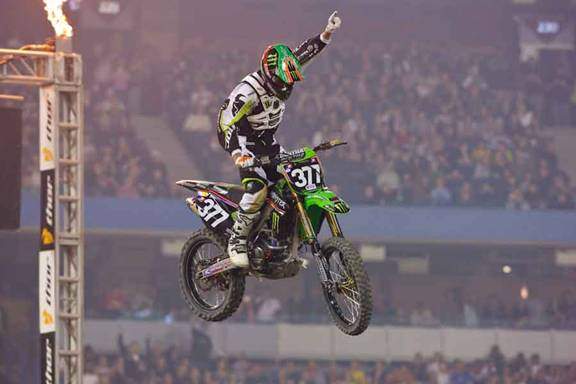 As the gates dropped on the 20-lap main, renowned starter Mike Alessi, of Victorville, Calif., grabbed the holeshot aboard his Rockstar/Makita Suzuki. Canidae/Motosport Kawasaki’s Tommy Hahn, of Decatur, Texas, and Stewart followed in second and third with Reed fifth. The series’ top two riders asserted themselves at the front of the pack by the completion of the first lap. The Australian native and reigning series champion Reed stayed close to Stewart throughout the first half of the race, but settled into second en route to recording his ninth runner-up finish of 2009. Factory Yamaha’s Josh Hill, of Yoncalla, Ore., brought home a season-best third place finish.

“The track was tough tonight,” stated Reed. “I gave it all I had. I just made way too many mistakes and (James) slipped away. I want to thank everybody at Rockstar/Makita Suzuki. We’ll just move onto Jacksonville (next week). It’s always good to have close racing (for the title) but I’m looking forward to that week off. It will be good for everyone. (My team) wants to be there every week and win this thing. It’s our goal.”

“It feels great to come to America and achieve so much success in my first full season,” said Pourcel, who after an accident in 2007 wasn’t sure if he would ever walk again let alone race. “I’ve worked really hard all season and so has my team. Tonight I got a good start and had a really good first lap. I’m really proud to win my first championship. It’s been a really great season.”

“Monster Energy® Supercross is only hosted in the most prestigious professional sports stadiums across the nation and to have Jacksonville selected as one of the 17 sites is a testament to the continued success of sporting events in our area.” said Bob Downey General Manager of SMG-Jacksonville, “Adding this world class event will bring national attention to Jacksonville and the North Florida area.”

Located on the St. Johns River in downtown Jacksonville, the stadium plays host to some of the country’s premier entertainment events including Super Bowl XXXIX and Monster Jam®, which recorded a record 70,611 fans earlier this year. Jacksonville Municipal Stadium is also home to the NFL’s Jacksonville Jaguars.