Ricky Carmichael has five Monster Energy Supercross Championship rings to wear, if only he had room—he also has ten AMA Toyota Motocross rings! We asked the man who won Phoenix a time or two to check out this weekend’s track map and tell us what to expect when the series comes to town. But first, we got his take on Anaheim.

“I thought Saturday’s track at Anaheim was excellent,” said the man who last raced an AMA Supercross in Orlando in March ‘07. “The traction seemed good, and the weather helped that out with that little bit of drizzle we had. Even though it turned out the way it was supposed to for all of the favorites, it was a great way to start the season for the series.

“That was just a really weird night, and an odd outcome,” he added. “Josh Grant rode good all day long, so good for him and good for the whole Gibbs team—that can only help our sport. It’s always good to have different teams rewarded.

“I’m sure that Reed wanted to beat Stewart straight up, rather than have him not even finish, but in this game, you gotta take the points any way you can get them. I also really hope James is okay—I don’t get into the gossip too much, so it’s Monday and I don’t know who’s in pain and who isn’t, but Stewart sure rang his bell. He was laying there for a while, and it looked like a hard crash, so I just really hope he can get back to racing.”

And what will we see in Phoenix? 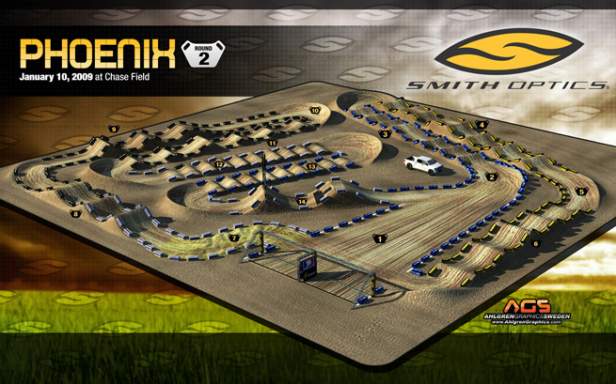 1. “I’m not big on 90-degree first turns because it always looks like the guy on the inside is going to get to the first turn first, maybe third or fourth gate over from the inside poll—that’s where I would start …”

2. “… because when you hit that first turn, I’m afraid a lot of people might get pushed to the outside, maybe even out through the Tuff Blocks and into the next lane.”

3. “Off the start, everyone is probably going to go double-double-triple into that first right-hander, but in the race, when you can use the outside berm in the first corner, we’ll probably see triple-triple-single, though someone may get a wild hair and go triple-quad! But I can assure you this: if you quad into that turn and you clip that last one, you will be going for a ride into next week, maybe into the ‘tread head’ seats!”

4. “This is a pretty basic section: Jump up onto the tabletop from the single, skip across to the next one, off the second one over the single, then double into that flat 90-degree turn.”

5. “I really like this corner here, but I do think they should build up a little bit of a berm here out the outside just it will maybe form two lines. If not, you might just see everyone on the inside. Bike setup will be key here, because on a flat, fast turns like this, you have to have the bike handling well.”

6. “This is a unique section. I think the really good guys are going to go triple-double, and the ones who don’t feel as confident will go double-triple, which makes it much harder to get stopped for the turn—you want to stay on that inside and let it drift out just a touch as you cross in front of the starting gate, which will likely be dry and slick. Tire selection will be key here.”

7. “This sandy chicane is pretty cool. It might be one-line, depending on how often they groom it, but it’s definitely different. You’re going to want to let your bike flow through here and line it up for the triple.”

8. “This is a just a big ‘Brraaaaap!’ triple [note: RC still makes his “Braaaaps!” sound like two-strokes]. That’s a standard triple, something to just get right over.”

9. “Another standard triple, though the way they have the face of this one, it looks like the one Ping snapped his pumpkin in half on here back in the day! That looks pretty steep, but you can never tell.”

10. “Flat sections going into corners like this can be pretty good places to make some passes, even if everyone is going to the inside. A guy can scrub the triple or what have you and really try to drive it in on someone if you have to, but if you do that, you have another rhythm lane coming out of the corner that’s going to be a problem.”

13. “More hoops. Normally they’re pretty good in Phoenix because the dirt is nice and they don’t get too crazy. That way you can go pretty much anywhere. And I like how both sets of hoops are coming out of 180-degree turns, so you can set up and get next to somebody and pass them while using the whole track.”

14. “Make a left and there’s the finish line—no problem…. And I’m glad to see that there isn’t a boat out there to worry about, just this Toyota truck. Hey, with me, anything could happen! I could get sideways in the first set of hoops, run off the track, hit the outside berm, and launch and maybe load my bike right up. Just kidding!”