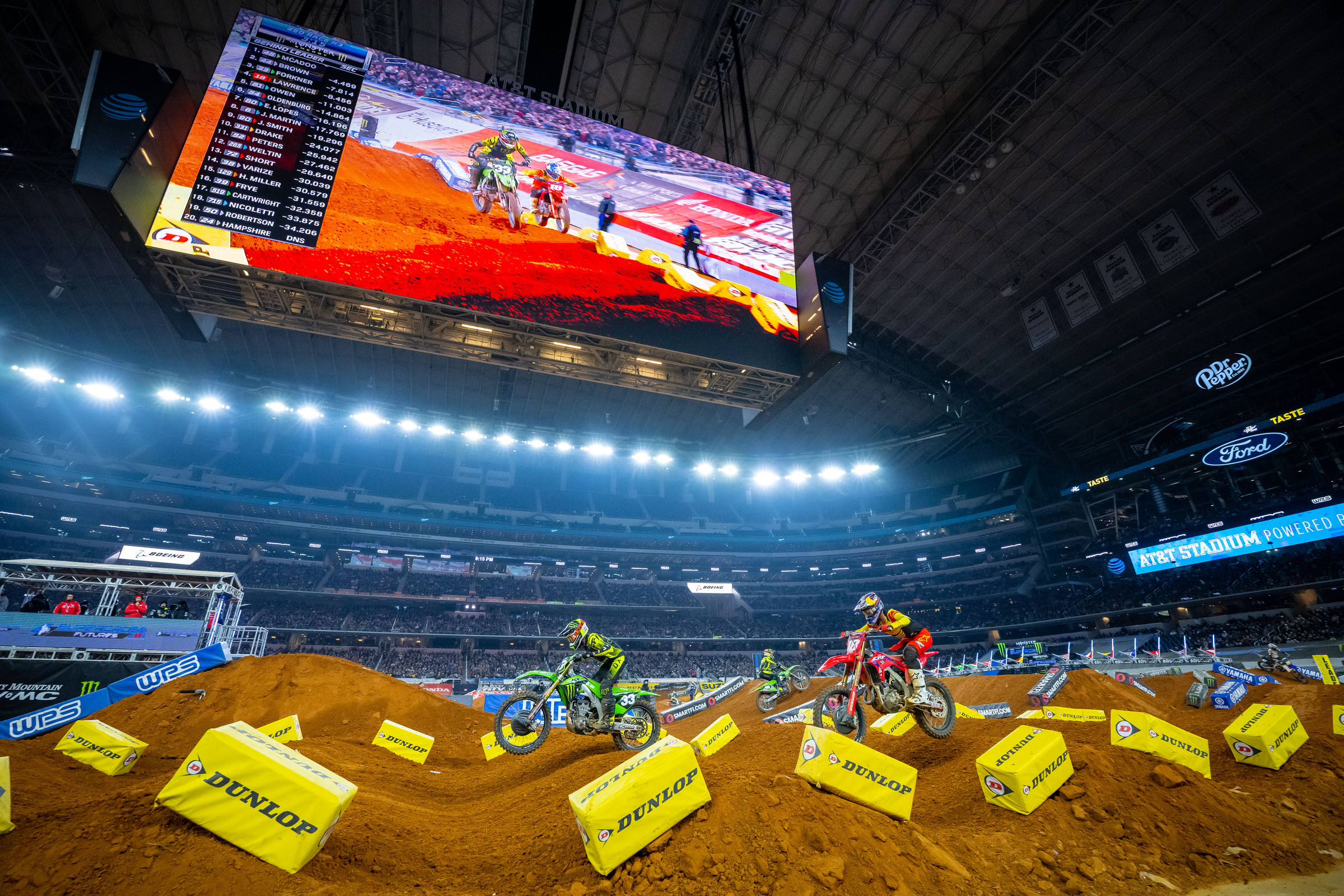 The Triple Crown races always provide some wild moments, but the 2022 Arlington Supercross may have been the wildest of them all! As such, we fired off some questions to long-time pro Jason Thomas to sort through all of the chaos and draw some conclusions on what is happening in Monster Energy AMA Supercross at the moment.

It’s not that it’s so much harder, it’s just more likely to result in riders making contact. Logically, not being able to use your rear brake as you remove your right foot from the footpeg (normal while entering a corner) is going to increase speed and reduce control. We saw several crashes between the 250SX Futures, LCQ’s, and main races. I don’t believe that was a coincidence.

Following a silly mistake, how impressive was Jett Lawrence’s first-race charge from 22nd to fourth in the first race? What thoughts were going through your head when he did it a second time in the third race, going down in the first turn?

I believe that first crash started a snowball type night for Jett. Had he gone on to win that first race without incident, I think he would have been calmer for race two and race three. The crash created a sense of urgency that otherwise wouldn’t have been there. Jett is typically wise beyond his years when it comes to race craft and poise. This was an anomaly that I believe he will learn from. One silly crash got him off his game and escalated into much more serious incidents.

Thoughts on the Jason Anderson-Malcolm Stewart incident in the first race? Was Mookie’s push warranted?

It was a bad decision by Anderson. He got impatient and forced the issue. A move like that has only two outcomes, and Mookie is on the ground in both of them. I don’t blame Mookie for being angry. I would have been raging mad. Justifying the push is not for me to say but I can certainly empathize with the sentiment. That corner entry angle by #21 was always going to result in Mookie going down which can’t be advisable.

What went wrong in the Jett Lawrence-Austin Forkner crash in race three?

Jett was about as loose as I have ever seen him. He was way over the edge. He almost crashed in the whoops and then just sent it around the outside of the next berm. As he crested the finish line jump, he clipped the Tuff Block and it shot him back right. Unfortunately, Forkner was in his new flight path and they both went down hard. It was 100 percent Jett’s fault, but it was also completely unintentional. Forkner got the worst of it, and I highly doubt he cares if it was an accident or not. Racing can be awfully cruel sometimes.

When Cooper Webb caught Justin Barcia on the final lap of the first race did you have flashbacks to 2019?

Nah, I was really just curious as to how it would play out. Webb is a late race master. He is always several moves ahead of his competitors and we saw that prowess in play again. Barcia is a wild card, though, as he is absolutely willing to add several shades of red to Webb’s orange KTM. In the end, Webb got it done and Barcia never got an angle for destruction. It was a fun last lap, though.

Was it bold of Supercross LIVE and the Race Day Live broadcast crew to put up a poll about Jett Lawrence having a perfect season after only one round?

I would say ill-advised. Jett is only 18 and it was only one race. They are in the business of creating engagement, though. The fact that we are talking about it in this column could be proof that it was in fact a good idea.

It seems like Eli Tomac is riding at the highest level of his career and somehow Jason Anderson has had several nights where he is simply faster. How awesome are these Anderson-Tomac battles we have seen so far this year?

It’s really the story of the season. Anderson’s resurgence is nothing less than spectacular. He is firing on every cylinder that Kawasaki can muster. Tomac, to his credit, is back to his 2020 level. These are two titans amongst a field of superstars. I think we will see Webb join this fight as we roll into March. Maybe not so much for the title but on a per-race basis, Webb is trending that direction.

This 450SX title fight has become a two-horse race now with Tomac and Anderson almost a race ahead on third-place Malcolm Stewart. Both El Hombre and ET3 are premier class champions, older, wise riders. Who do you give the advantage to here?

I still like Tomac for the title. Anderson is riding better than he ever has but he is still making questionable decisions. It could be argued that he would have two Triple Crown wins if he hadn’t had untimely crashes. I’m a firm believer that repeated bad decisions eventually leave a mark. Anderson hasn’t been bitten too badly yet but if he doesn’t clean up the chaos a bit, I think it’s inevitable.

I. Don’t. Know. Send help. This train has gone off the rails. All of the warning lights are on, the sirens are blaring, panic buttons are smashed. It’s not good, folks.

It's still early in this 250SX East title fight, but what early trends stick out to you the most?

I still have Jett winning this title but it’s a three-horse race. J-Mart has a chance to do some damage in Daytona and change the narrative. Jett needs to get his series back on track and remind everyone that he’s the alpha. Cameron McAdoo, on the other hand, is just hoping for more of the same. Leaving Minneapolis, I felt pretty confident in what to expect moving forward. A week later, those themes have all been shaken. Daytona is another roll of the dice. I think we might continue to see this week-to-week change in momentum.