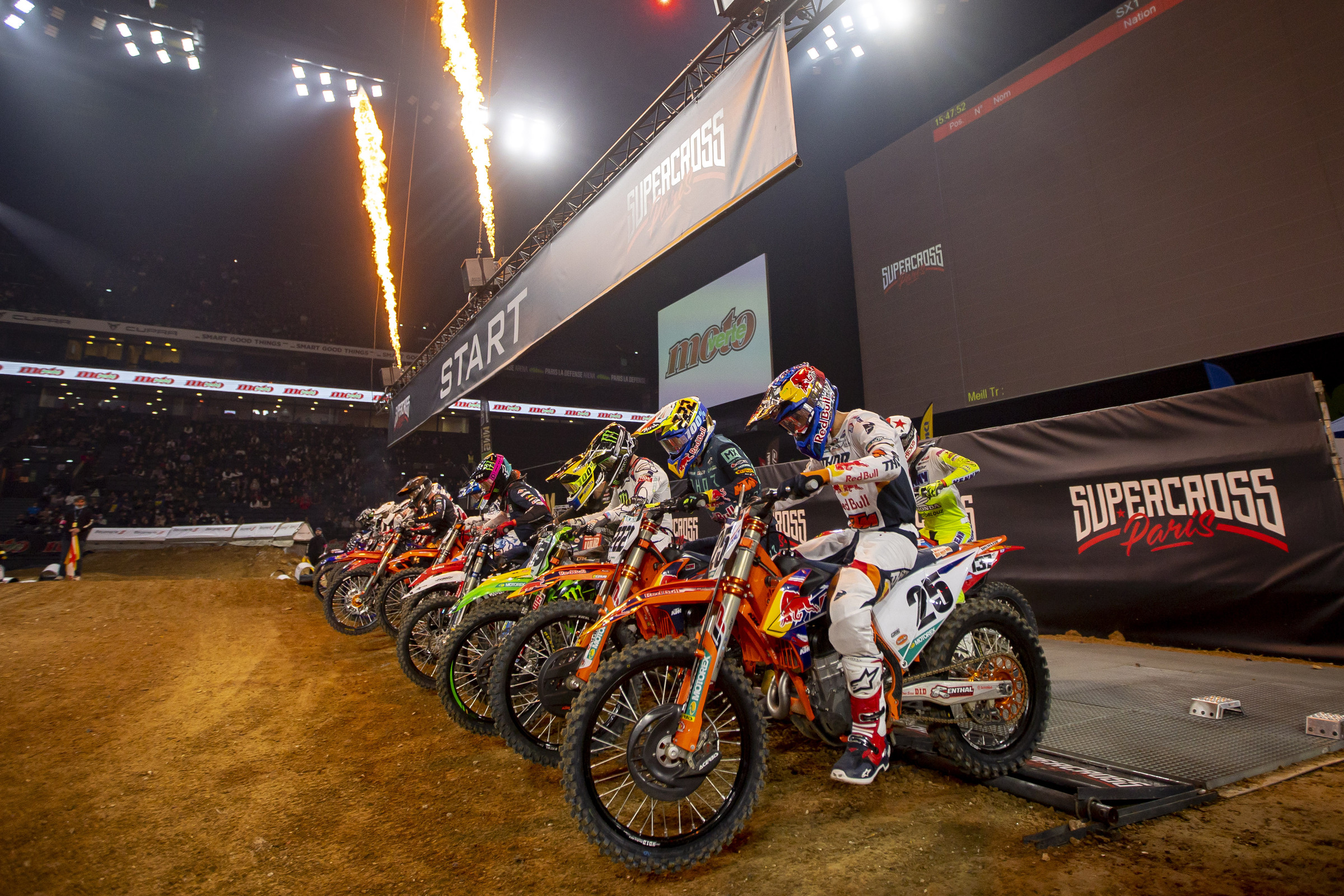 The 2021 Paris was back this year and as the only European off-season SX race, it was nice to get back to a bit of normal for the riders and teams.

The track wasn’t its usual formidable obstacle. The promoters brought in MXGP stars Antonio Cairoli and Romain Febvre to race and as a concession to them, the whoops were left out and if we’re being honest, other parts of the track were pretty tame compared to years past. So it this added up to racing where the start was maybe even MORE important that the usual importantness—if that’s even a word. Passing? Yeah, there wasn’t much out there.

First up, we’re hoping MXGP vice-champion Romain Febvre heals up from what looked like bad leg/ankle injuries when he was forced to step off his Kawasaki in mid-air over the triple. He had ridden well in the first race and started up front in race two before suffering the huge crash. We have heard he suffered a broken tib and fib that required surgery. That was an ugly crash for sure. Get well soon, Romain.

When it was all said and done, the winner of all three races (of varying length) and the King of Paris was Red Bull KTM’s Marvin Musquin! In front of his hometown crowd, Marv put on quite a display as he led every lap of all three main events and was never really challenged on the way to a popular win.

Afterwards he spoke about that being his goal, to win all the main events and repeat here as King. About the only hiccup he had was a mid-race look down at his rear tire in the third main to check whether he had a flat or not. Other than that, it was smooth sailing for Musquin.

“That was my goal, to get the holeshot and have a free track,” he told me after the race. “I knew it was tough to pass and you can see that. It was good practice, try to push to the end and it was hard to make a big gap. When you’re leading, you don’t want to take huge risk but I tried to push and have a good practice.”

Marv’s got serious “flying at the test track” vibes going on and he sure looked great this weekend. He’s working with David Vuillemin now, he’s staying in California all winter and he says he feels good because he’s doing something different than usual. Musquin was completely dominant at Paris.

Second place was another veteran French SX rider in Cedric Soubeyras on his Husqvarna. Soubs has raced these types of races forever, he’s raced USA SX plenty of times, and he told me afterwards that this was maybe the best race of his life! He and Musquin had dreamed about standing on the podium together at this race, and Soubs made it happen by fighting off SmarTop/Bullfrog Spas/MotoConcepts Honda's Justin Brayton in two of the three mains.

In the third main Brayton was all over Cedric again, which was the battle for second overall. As we said, the track was tough to pass on and Brayton just couldn’t find a way by without trying to get a bit greasy. Soubs starts were better than the Brayton and that’s all he needed to to have his career best finish. Near the end of the third main Brayton went way down on the inside of Soubs to try to chop off his line but he came up short—and then that led him to a slower rhythm through the next second of jumps. This allowed the fourth-place rider, Red Bull KTM’s Antonio Cairoli, to get close, probably much closer than Brayton thought. Tony dove inside of Brayton in the final turn, and they smashed into each other. Brayton went down, but did recover for fourth. That was the type of drama and action the Paris fans wanted to see.

Brayton ends up third overall and the top three riders were in a class of themselves for the day. Twisted Tea/HEP Motorsports Suzuki’s Justin Bogle was strong and took fourth overall. He had some Friday practice issues but rode well on Saturday, he even had third in the bag until Brayton took it in the last corner in main number 2. Lots of leg and arm swag from Bogle in practice as well.

Some Australian named Chad Reed was fifth overall and typical Reedy, his qualifying wasn’t great but when the lights were on, the two-time SX champ got better. This was his first race in a while and he was more than competitive out there on his KTM. The fans were also stoked to see him out there.

After a poor first main where he crashed on the first lap, Cairoli went 6-3 in the last two to end his weekend well and also got a nice send off from the promoters as well.

Canadian Dylan Wright was tenth overall after some good practice times on Friday and Alex Martin was eleventh overall. “We” have some work to do before Anaheim 1, people.

American Ryan Sipes exited the night early on his GasGas 350 when he went down and twisted an ankle.

In the SX2 class it was Phoenix Honda’s Kyle Peters, in his inaugural visit to Paris, going 1-1-1 to win the Prince of Paris. KP got all the holeshots and led all the laps in an impressive performance. MX2 World Champion and crowd favorite Maxime Renaux was fastest in every practice coming into the mains but bad starts, mistakes and a crash set him back in each of the main events. He went 5-2-2 on the night.

American Kevin Moranz ended up third overall on his KTM with 2-5-3 finishes and for his first time over here, looked pretty comfortable as he, Peters and Renaux were up front a lot.

So that’s it from Paris, good times here and great to be back at one of the world’s most historic SX races in a fabulous city.