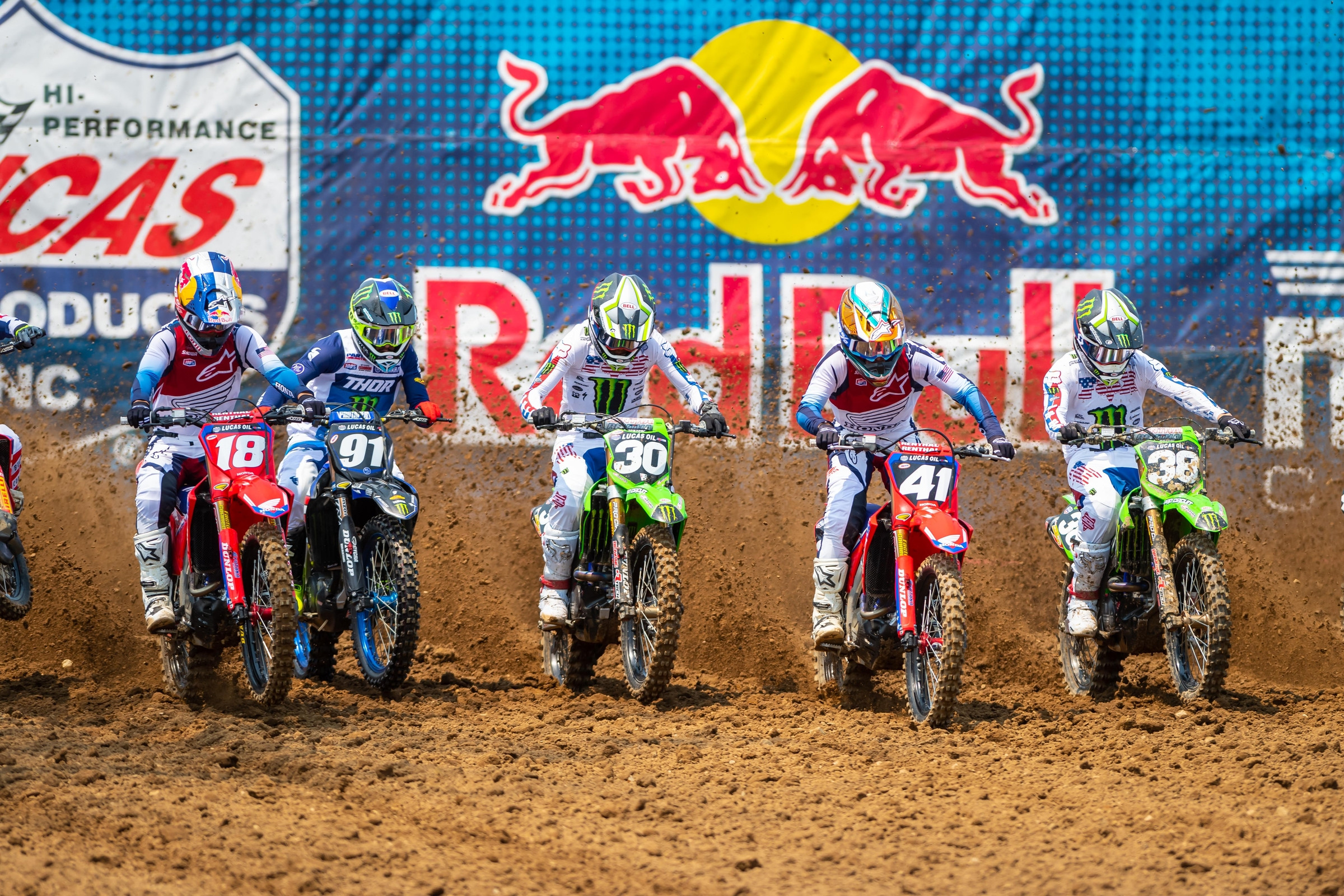 The sandiest track of the Lucas Oil AMA Pro Motocross Championship, The Wick 338, hosts round five. This round is a demanding physical test for the riders. It’s also a challenge to their skill set, too. The sandy surface can be deceiving as the base is harder than it would appear. The bumps are choppier than a traditional sand track. There are outside berms to rely on, but there are also inside ruts in some of the corners to slow things down. It’s a challenging track that forces riders to use a combination of finesse and brute strength. There is simply no faking it when it comes to Southwick, Massachusetts.

One of the most intriguing aspects of this round is the impact of local racing. No other race on the calendar has seen its local following have better results. Riders like Tony LaRusso, Keith Johnson, JoJo Keller, Mike Treadwell, Robby Marshall, Scott Carter, Carlo Coen, and many more have made their name on these hallowed grounds. Further, riders that would go on to win titles like John Dowd and Doug Henry were Southwick locals long before America knew their names. Motocross owes a big debt to the NESC for all of the talent it has produced through the years.

Dylan Ferrandis continues to scald anyone near a 450. He has been on the podium every moto so far in a class that has more depth than any time in recent memory.

Eli Tomac has won two out of the last four motos, turning the tide on a not-so-good narrative. Southwick is arguably his best track. Can he find his first overall of the year?

Aaron Plessinger grabbed a holeshot (with a sweet look back no less) and found his way to double moto podiums at RedBud. He has been quietly consistent this season, sitting third in the championship.

RJ Hampshire won RedBud for the second consecutive year (okay, there were 2 last year). Had he not struggled through the broken chain at High Point, he could be looking at a serious run in the making.

Jett Lawrence has an eight-point lead going into a track he should fare well at. My first time watching Jett was in the Italian sand of Ottobiano in 2018. He won the EMX250 class at 14 years old. Safe to say he knows how to ride the sand.

Justin Cooper snagged another moto win at RedBud and it’s arguable that he would have gone 1-1 had he not tossed the lead away. He’s riding really well and is capable of winning each time out if he cleans up a few small mistakes.

Fantasy picks for Southwick are a unique dynamic. Diagnosing riders that ride sand well takes research and observation. It’s also good to look for past results for this very track as they often repeat themselves. I also like to look for riders that grew up in the sand, even if it wasn’t this Southwick track (Florida is a good place to start).

A few 250 riders to keep an eye on would be Kailub Russell (GNCC has several sand rounds), Jalek Swoll (Florida), Jeremy Martin, and Ramy Alves (Florida).

Another aspect to watch closely are the local riders that do well in the unseeded practice. There will be a few hidden gems that come out of the woodwork. Be careful, though, some will be fool’s gold as they ride the track when it’s at its fastest. I always verify a decent result from the Racer X Vault before adding them to my team. A fast lap is one thing, but 35 minutes is an entirely different animal.

In the 450 Class, I would adapt the same strategy, but there might be a few opportunities to take advantage of due to weird circumstances. Marvin Musquin, for example, suffered a broken wheel at RedBud. He was already double points eligible and that DNF only gave him more upside at a track he rides well. Another rider that fits this bill is Max Anstie. He is a sand master (won a moto at infamous Lommel in 2019). His results in 2021 haven’t lived up to his potential, presenting a nice opportunity for a big score. I would also be mindful of the local element, especially in this 450 class. Riders like Chris Canning will lean towards the 450 class so they aren’t out equipped like they would be against factory 250F’s.

I am constantly scanning the field during the 450 motos wondering where John Dowd would fit in.

I include the word “wicked” in any and every question I am asked this weekend.

Jace Kessler changes his number to 799 for Southwick.