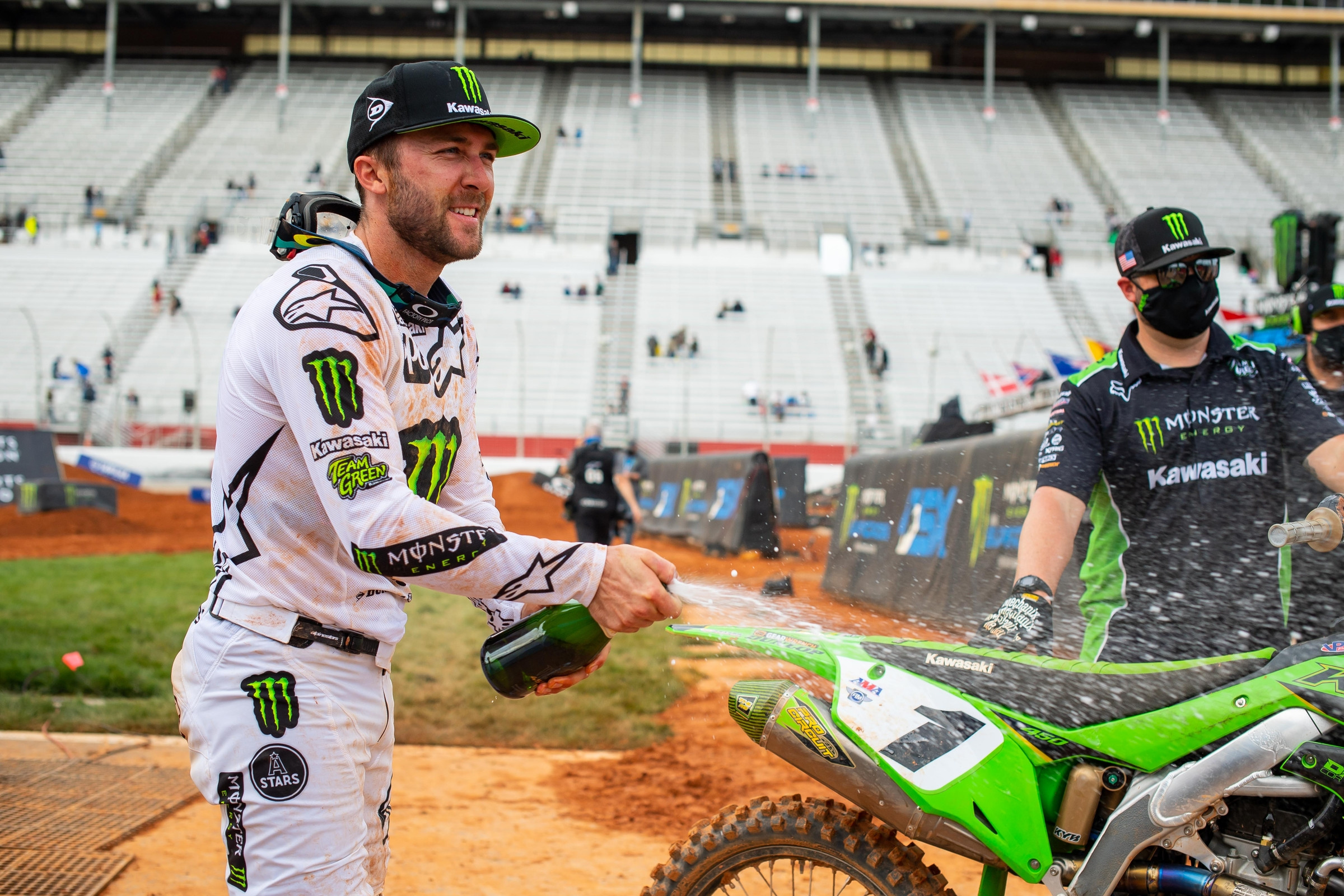 A late race pass on then-leader Chase Sexton saw Eli Tomac surge ahead to claim his third win of 2021 and 37th win of his career on Saturday at the 13th round of Monster Energy AMA Supercross. While Tomac still sits a lengthy 36 points back of championship leader Cooper Webb, he still feels there is a lot to fight for in the final stretch of the season. It’s no secret he’s been great at Daytona, a similar lengthy speedway type of track, but Atlanta took an extra step up from even Daytona in both size and scale. Tomac still prevailed and he spoke with the media via Zoom after the victory.

Racer X: You were right behind that lead group of AP [Aaron Plessinger], Chase [Sexton], and Cooper [Webb]. Up until Aaron crashed, it had seemed like maybe this is coincidence, but right after he went down and you saw that his big lead disappeared and Chase was ahead, it seemed like you really dropped the hammer then and upped the intensity. Was that coincidence or did you realize, “Hey, I can really make a shot at the win?”
Eli Tomac: Yeah. You said that the way the race was. Aaron was pretty far out. I was pretty nervous. I was like, “I don't know if we’re going to end up catching him.” Once he went down, yeah, there was a little extra hope to the lead of the race. To be honest, I felt like I was getting better as the race went on. I found a couple better lines in both sets of whoops, and that was it. Finding some more lines, Aaron going down and kind of giving me that hope to make the push to the end. So that’s the way it was. I was happy with everything motorcycle-wise. It turned into a hell of a track by the end of the day.

How do you approach a race like today where you got limited practice? You think you’ve got another qualifying session, and then that one goes away. Were you still figuring it out during the main event time?
Yeah. It was hard. You hit the points right there. It was a longer track. It was basically two tracks in one, so having one practice was tough. The laps were so long, you only got a few laps. So, we were getting cut laps because it was so long, and then we only had one practice. I was pretty notchy in that practice! I overshot the second double on that finish line lane. Oh, my gosh. Smashed my face. Not that that matters. The whole practice I was missing rhythms. Got my act together more in that heat race. Like you said, it’s tough. But the good thing is you’re like, “Hey, everyone’s in the same boat.”

A few weeks ago, you said that it was essentially a two-person race at the 450 level. You sort of discounted yourself from the championship. Do you now feel differently in light of tonight and the next two races at a similar track?
I don't know. I’m still a ways out. I’m still 36, so it’s still out there. Anything can happen, of course. That’s it. All I can do is try to win. The good thing is I feel like I have an advantage on this type of track, so we’ll see how it goes into Salt Lake and into the next few rounds.

We’ve obviously done Daytona a lot and that’s a really unique, special place. This one was like Charlotte back in the day before your time. Would you like to see more of these type of speedway races? Longer laps, more supercrossy? I don’t consider Daytona this kind of track, but do you want to do more of these?
[laughs] Eli Tomac likes these races, I just don’t know what everyone else thinks. That’s it. I feel like there is more room, just period. There’s more room. It’s more high-speed, so some guys might not like it, but there’s more room to make passes. You’re not stuck in one line in as many areas. Just a bigger track. So yes, I would like to have more but this year is unique where we’re going to have three here. Maybe one of these added on with Daytona would be cool.

We all joke about how your riding style really benefits a track like this, but as a 450 guy that is riding a bike to the absolute limit at certain times, how is that type of track where it’s bigger, the jumps are way, way bigger than what you guys are used to – is this easier for you guys to ride, or is it a completely different mindset than a 47 or a 50-second stadium track like we’ve seen this year? Does it allow you to really open up more and change a lot of stuff and feel more comfortable, or is it completely different?
It’s just different. It had more room in general, at least in my opinion. Like I said, we had two lines in the whoops. I think most of us started on the right side of the whoops in that longer set by the finish, and then as the race went on, we were able to move over to the left side and then we were skimming. So that was nice. Just more room. We had good room in the sweeper turn after that. For the motorcycle, it’s more room, period. That’s all I’ve got to say.