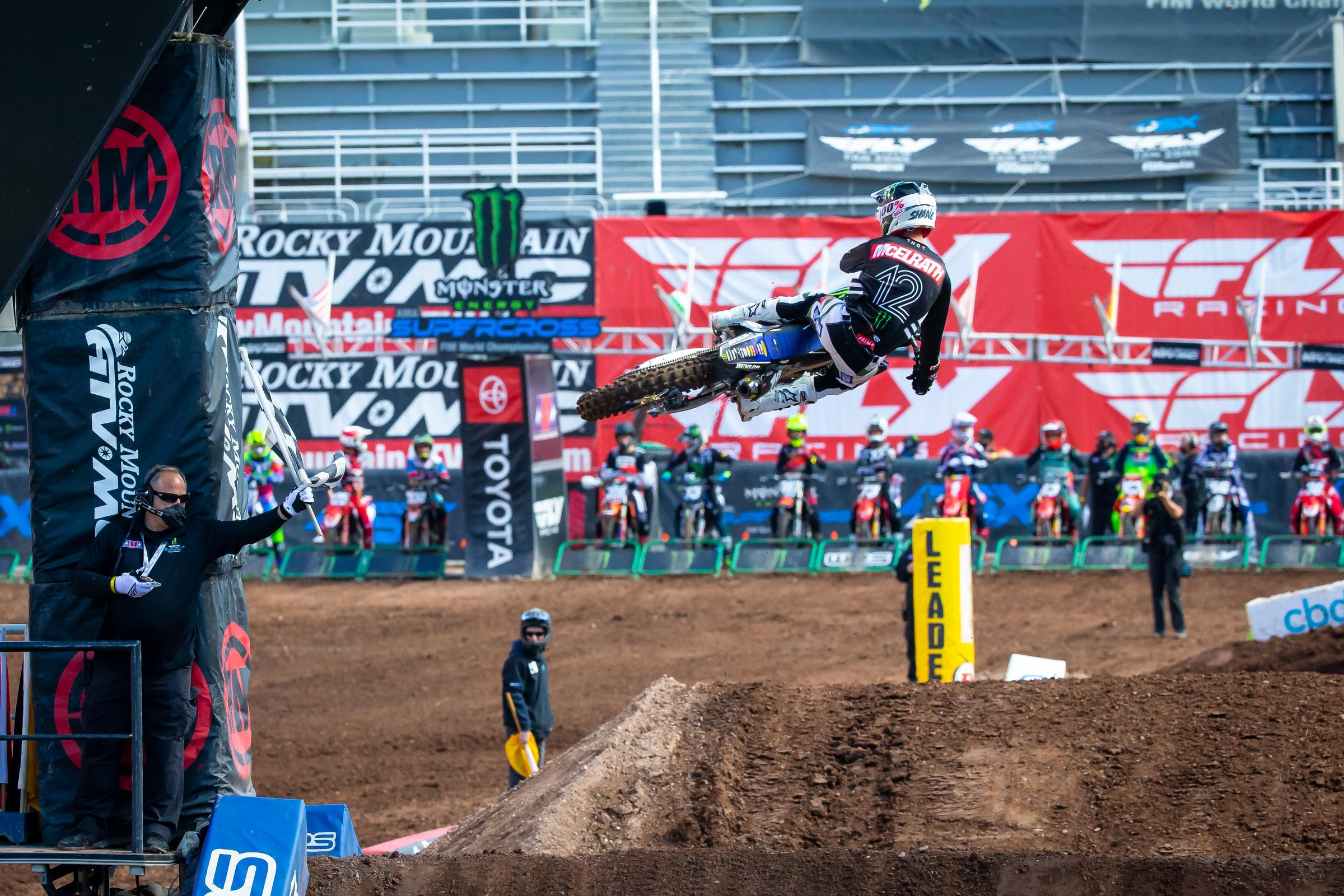 “Not yet, no, I don’t have anything yet for the 450 class in 2021,” replied Shane McElrath in June when asked if he had any idea of what he’ll be doing in racing come the January of 2021 and the beginning of a new season of competition. “Right now and while here in Salt Lake, I want to go out and compete in these last few races here as if I have nothing to lose.”

And that’s exactly what the Monster Energy/Star Racing Yamaha team did within the confines of the Utah Utes Pac-12 Conference NCAA football stadium, ultimately fighting his way to a runner-up finish behind GEICO Honda’s Chase Sexton in the 2020 AMA 250SX East Region Supercross title chase. Now, and in less than two weeks, McElrath will head to Hurricane Mills, Tennessee, and the kickoff of the Lucas Oil AMA Pro Motocross Championship. And it’s a very important time in the career of the North Carolina native as he will be mandated to graduate up and out of the 250 classification come the drop of the curtain on this year’s outdoor season at Fox Raceway at Pala in California on October 10. At this point in the year without a 450cc-based contract for the 2021 racing season, yet in possession of a very fast 250cc Yamaha YZ250F, McElrath is keen to get behind the starting gate as soon as possible and to make an impression on the team bosses of worldwide motocross. Relaxing and settling in for the afternoon after a morning of training, McElrath spoke with us about just what comes next.

Got your work done and now chilling out and riding out another day during this fun-filled lockdown, huh?
That’s right. Yes, sir.

This lockdown is certainly getting old, isn’t it?
Yes, it is. Yeah… It’s really frustrating. I’m not sure what to believe with all of this anymore. It’s a little frustrating, but we’re trying to just keep going and do what we’ve got to do, really. We’ve been full-time training and actually the last couple weeks have been really heavy. It has been more than I’ve ever done training-wise. It’s also been good as far as having more time with the team and more time with this training program with my body getting used to it. Yeah, it’s been really good and I’ve just seen my body handle the load. We just finished our last hard week and now I can rest a little bit.

On a much brighter note, you made a very formidable run at the 2020 250SX East Region title. You ultimately wound up a close second to class champion Chase Sexton, but won main events along the way and really rose to the occasion at the five-race Salt Lake City campaign. All things considered, were you happy with it all?
Yeah, yeah it was pretty good. I learned a lot and felt like I did the best I could and I did the best that I’ve done ever, so it was frustrating to not get the championship, but at the same time, we overcame a lot this year and grew a lot. It’s hard to look at it from that perspective because we want to win, but that’s where we’re at right now.

I’d assume the main event wins as well as the close shot you had at the championship are going to send you into the outdoor season here in two weeks’ time infused with confidence.
It definitely does. Yeah, the break from COVID was really good for us training-wise because right before the supercross season actually started, everything was still pretty new. My body was still adjusting and I was still getting used to the bike and it took a couple rounds in to really get the bike dialed-in at the races. In fact, Daytona was where I rode the best and we made some big bike changes before that race. Then, the very next weekend, everything was called off. We really got back to work and fine-tuned things and just continued to build and I think that really showed when we came back to supercross in Utah and now we have another break because outdoors got pushed back again. Really, this whole year has been a big year of growth and learning. We want to win, but we have to take things for what they are be happy with the successes that we have had. We really have a lot of growing to do and that’s what we’re really thankful for. We’re thankful of where we are at and where we are kind of headed. There were a lot of unknowns coming into this year and we’re excited with where we are at.

You raced a KTM 250 SX-F FE in the 2019 Lucas Oil Pro Motocross Championship and settled in at ninth in points after all was said and done. Now on the Yamaha YZ250F and looking to the beginning of 2020 outdoor season at Hurricane Mills, Tennessee, how are you seeing everything?
[Pause] I’m really not sure yet. I guess that I’m really hoping that we show up at Loretta’s and the races are a go. That’s really what we’ve worked towards. Once outdoors got pushed back again, I was like, “Okay…” I was a little deflated after that; a little discouraged. It was like, “Alright, at this point we’re not really holding our breath. We’ve done the work and we’re ready to go. Hopefully, we do race.” That’s really the way we are looking at it. I mean, I’m more ready than I’ve ever been and I’m on the best bike that I’ve ever been on and things are in a really good position. I’m excited to get to race the Yamaha outdoors. That’s where you’ll really see the success of the Yamaha. I love the bike and I really want to race it outdoors. It’s really exciting.

And the approaching outdoor campaign will mark your last AMA Pro Racing season as a 250cc competitor, correct?
Yeah, that’s right and that’s the big thing. Man, I really want to race just to race because of being on the bike. At the Daytona Supercross, that was really the first time I got to see the power of the bike because it was a faster track and I was like, “Wow! This thing is fast.” Now we’re on outdoors and I haven’t gotten to ride my race bike yet, but my practice bike is really strong and I want to get in a race scenario and put the bike through its paces and just see how it goes.

Yes, it’s like both you and the team have gotten the heavy work done as far as the training, testing and performance and want to see how it all pays off on the battlefield.
That’s right.

The Lucas Oil Pro Motocross Championship tour will start in a fortnight in Tennessee and then roll on across the country to stop at Washougal, Indiana, RedBud, Millville, Florida, and in October, Pala here in So. Cal. Obviously, it’s a unique, abbreviated schedule and it is what it is, but I wanted to see what your impression of it all was…
I am perfectly fine with it. I’m glad that we have something set and it’s not really just like throwing a dart at the wall. I’m kind of being hopeful more than anything. I feel like this our best shot to go racing and I’m excited about that. I hope that we do get to race, but we haven’t given much information on how things are going to work once we get to the races. We’ve heard rumors of different scenarios. There has been a lot of speculation that we just kind of hear. We don’t really know much and that’s kind of the part that keeps us holding our breath to even show up to race. All we know is that we’re going to race. We have our hotels booked and we have our flights booked, but logistically, we don’t really have much information. That’s really all we know. We’re not sure what’s going to happen and how’s it’s going to happen or if it’s going to happen. We’ve held our breath for so long now that it’s kind of like, “Alright, we just have to roll with it now.”

It's an important time for both you and your racing career as you’ll be forced to move up to the 450cc classification in 2021. Do you know where you’re at with anything in 2021, or is it still too early?
Yes and that’s probably the biggest reason I need to race. I mean I’m excited to race the Yamaha 250 outdoors, but more importantly, I Shane McElrath, need to race for my career. Once COVID hit this year, everything was out on hold. Yeah, we went back to racing and we got to finish out our series and now we’re hopefully going to race outdoors, but there are still a lot of things that are on hold. I need outdoors to hopefully to find and or solidify a ride in the 450 class for my 450 career. At this point we have spoken with a few different people, but we don’t have anything yet. It’s all kind of on pause because we are not racing and there are other riders that haven’t made their decisions about the future yet either. Everything is really on hold and that’s why hopefully I can go racing because hopefully that can move things along and that’s really kind of what my career needs for where we are at right now. It’s been such a good year of growth and learning and getting stronger mentally and physically and also spiritually. At this point we’re living on a prayer, really. We’re just trying to press on and give it our best and really, that’s all we can do. We need God to open some doors for us. That’s kind of where we are at. We want to press on and do our best and beyond that, we know that there is nothing else we can do. That’s really where we are at.