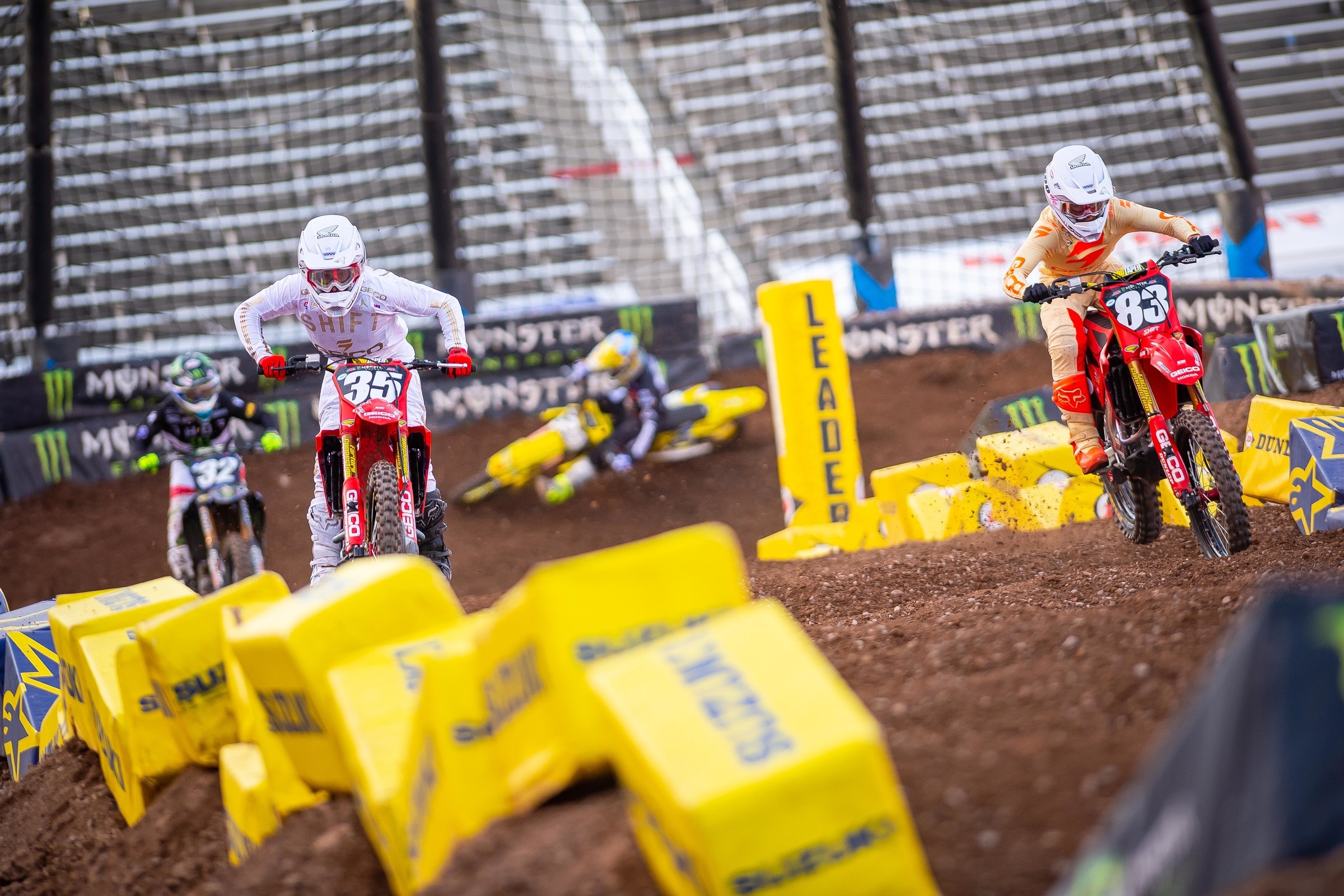 Insight O’Show and the Lawrence Bros

“There is going to be a time, and it could even be this weekend or in the outdoors, where they will be on the podium together, I promise,” answered Johnny O’Mara when asked how the two Lawrence brothers, namely Hunter and Jett, both out of Landsborough, Queensland, Australia, might fare this Sunday afternoon in the East/West Showdown set to run inside quietly cavernous Rice-Eccles Stadium. To most motocross enthusiasts the world over, Johnny O’Mara is a household name. The former AMA 125cc National Champion, AMA Supercross Champion, and multi-time member of victorious Team USA Trophee and Motocross des Nations efforts from 1981 through 1986, has, in recent decades, become a mentor/coach/confidant of a handful of the greatest, most talented and driven motocross racers to ever line up at a supercross, national or grand prix. For instance, Ricky Carmichael, James Stewart, Ryan Dungey, Jeremy Martin and a host of others have worked with the Californian and now that lineage certainly continues with the brother act from Down Under. After spending Saturday morning and afternoon mountain biking, reviewing video tape and revving up the dynamic Lawrence duo for the East/West Showdown on Sunday, O’Mara, while waiting on the brothers to go to dinner, rang us from Park City, Utah, and got us up to speed on all things Team Lawrence.

Racer X: Johnny, what’s happening this afternoon on the outskirts of Salt Lake City, Utah?
Johnny O’Mara: We were up early and out at a track most of the day. The track we were at was a beautiful place. Honda was there and so was KTM. It wasn’t really a supercross track. It had some whoops in it and some big jumps in it. It was also sandy and right along a river and everything. It’s been kind of fun out here. Fun but busy. For me, being in charge of both of the Lawrence brothers, we’ve had two races and have the East/West Showdown coming up. Hunter made the Showdown too, so we’re excited about that and Jett has been flying like everyone has been seeing. He got his first podium. Hunter rode really good last week and that was the first time he had raced in about eight months. Really, last week was his first supercross, so we were pleased with his finish last week in seventh. Actually, seventh sounds kind of rough. Hunter’s finish was a way better seventh than it sounds like. He was right in there with the top guys. I mean he could have finished fourth or something like that. Yeah, we’ve just been mountain biking and training. We hung out with Ken Block yesterday, which was cool. Ken took all of us mountain biking and showed us his place in Park City. It was fun.

I can imagine. What are Hunter and Jett like to hang out with?
They’re good. There is good, fun competition between the two. I hope I bring something to the table too and I’m challenging both of them all the time on a daily basis. We have to try and be a little bit better every day. That means being stronger and smarter and being better on the motorcycle where we are constantly looking at video and all that. Even though we haven’t ridden every day on the motorcycle, even on days off when we’re not riding, we have still been studying. We’ve been studying videos on things like positioning or studying what Jett does and what maybe Hunter can do a little bit better at, or vice-versa. There are some things that Hunter does really good that Jett should incorporate. We’re also always watching the 450 boys. There has been some tremendous racing out there with Tomac and Coop. We weren’t at the race on Wednesday, but we watched it on TV and stuff like that. We watched Jett and Hunter’s teammate Chase Sexton win the race on Wednesday. He rode really good. Yeah, we’re just constantly studying on how we can better, especially for the Showdown this weekend where they’re racing East and West together. There are definitely four or five guys in the East and West and it’s going to be pretty exciting this weekend, and plus there are still two championships up for grabs. It’s going to be pretty exciting. We’re not in the hunt for a championship, but we’re just trying to be the best we can. I mean even that podium finish for Jett is going to be contagious. He’s just going to want to be on the podium again. He’s got the speed, no doubt. Everybody has seen that. He’s made some little 16-year-old mistakes that have costs him some race wins already, but he’ll get it.

Yes, the third place finish Jett raced to certainly generated a lot of hype and interest. I mean, I even forgot how young he is.
Yeah, we’ve got some big and high standards we want to meet. We know we’re not lacking in the speed department. We know we’re as fast as anybody. I even have to pull back a little bit and remind myself that Jett Lawrence is only 16 years old. Come on. That’s amazing. As hard as I am on my guys that I work with, I have to realize that Hunter is 20. I mean even that is super-young. I also have to remind myself of that. Yeah, he’s been racing in Europe and all this stuff and he’s still only 20 years old, so he’s got a bright future here in America. We just need to get him healthy.

Both Hunter and Jeff could potentially find themselves in the top five come the finish of the East/West Showdown come Sunday afternoon, you think?
Absolutely. I look at it like if they can go out and get off the start, they could totally be one-two. Even watching them ride today, they’re great. There is going to be a time, and it could even be this week or in the outdoors, where they will be on the podium together, I promise. It will happen. It's just a matter of time. We’re ready right now and I’m sure a lot of other guys are ready too, but yeah, we’re excited racing here tomorrow. We’re just getting mentally and physically ready for the race. Basically, how we look at is that all the stuff that we’re doing now will be preparation for 2021, in all reality. That’s kind of how we look at it. We know that we’re right there to be competitive and I think everybody sees that. It’s all been a building process.

Did the stuff between the Lawrence brothers and Austin Forkner all calm down?
Yeah, it’s just racing, you know? You see it all the time. We’re not caught up in anything. We’re not in a championship scuffle at all. We’re just trying to do our own thing. Whatever happened there with Forkner, to me, that just goes right over my head. I don’t focus on anything like that. We’re more like, ‘Just do your thing and let it go.’ Like anything, the sort of stuff settles down with a little bit of time. Forkner has his championship and racing with Dylan [Ferrandis] to worry about. Then you have the East with Chase and Shane [McElrath]. They’re close also. There’s a lot of tension between the teams and athletes. Let’s just put it that way. Even in the 450 class, Eli has a pretty big lead, but he doesn’t have it clinched. It looks like he will, but Coop[er Webb] still has a mathematical chance. Three #1 plates will be given after Sunday. It’s the highest level of racing.

Okay, my friend. Last question. You’re a former Monster Energy AMA Supercross Champion. What’s your take on what’s about to play out inside that football stadium on Sunday in Salt Lake City?
As far as the big class goes, I think we all can see that [Eli] Tomac has got a pretty good stranglehold on it with points. He’s been phenomenally solid this year and you have to give him a lot of credit. You would have to think that Eli would really have to mess up and I don’t think that’s going to happen. I’m also really impressed by the way Cooper Webb came on in these last six races here at Salt Lake. And like I said, the East/West Showdown is going to be exciting. No doubt.  There are two or three guys in each class and they can really throw down some really raw speed out there, and with the two championships being really close, you can’t even really say what’s going to happen because you just don’t know. The guy who puts it all together is probably going to walk out of there the champion in both East or West. With my guys, we’re just going in there to put on a good show knowing that we are going to prep for 2021 and that supercross season.