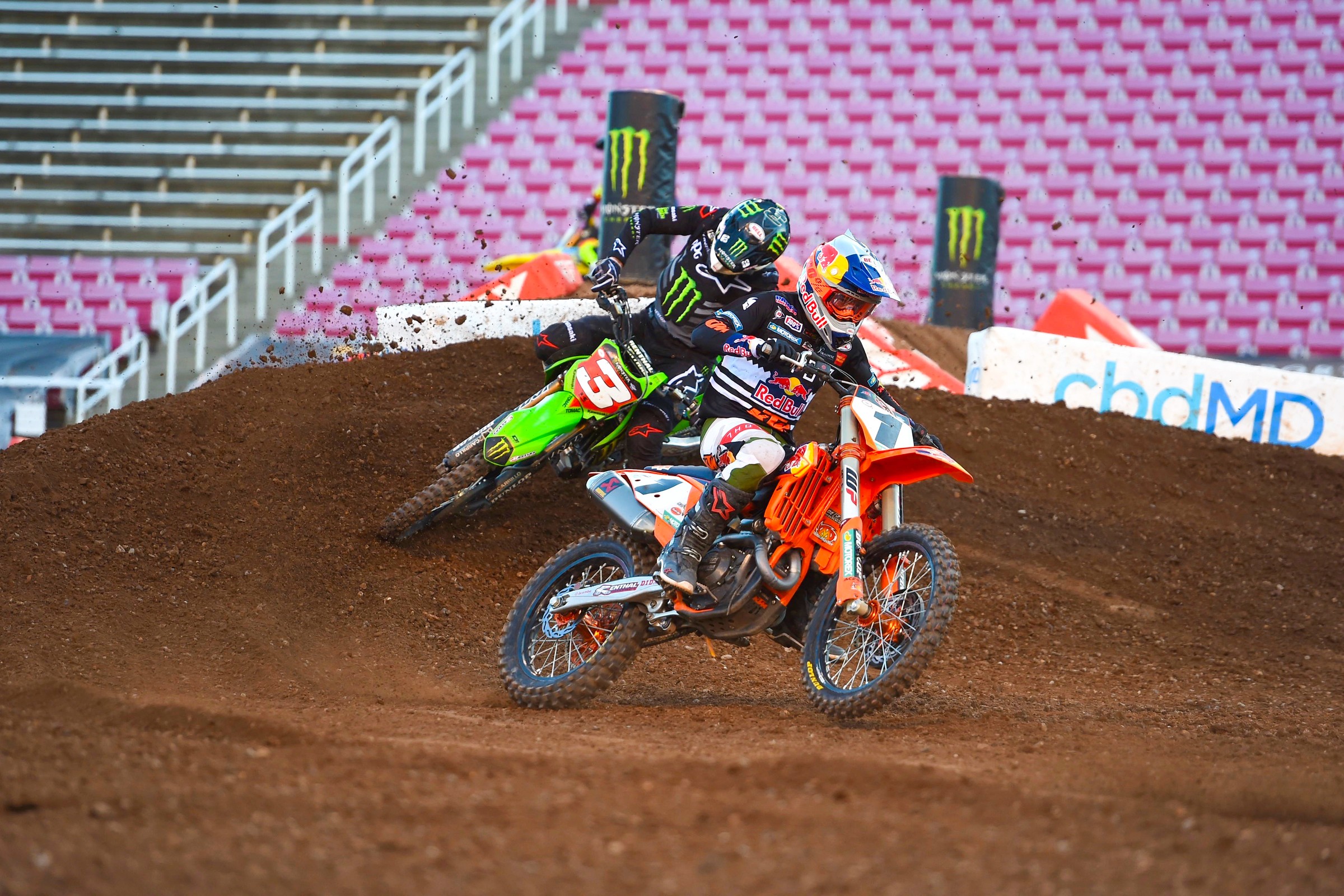 Tonight was big. Or at least it had the potential to be. Monster Energy Kawasaki’s Eli Tomac had a very real shot at wrapping up his very first, and long awaited, 450SX Championship, while both Chase Sexton and Shane McElrath had a chance at earning critical points that could have a major impact on how the championship picture gets painted at the shootout on Sunday. So how did it all play out? Let’s break it down in this edition of Saturday Night Live to find out.

The biggest question of the night was whether or not Tomac could bring this title home tonight. With a 24-point advantage over Ken Roczen in second place, and 25 over Webb in third, a win for Tomac would mean curtains for the competition. So, when the gate dropped, all eyes were on the front of the pack waiting to see how Tomac would come into the first turn. As the riders blasted into the first rhythm lane everyone was still waiting. And waiting. Where on Earth was Tomac? Turns out he’d had yet another bad start, and came into the first turn in dead last. Barring a crash, Tomac’s start literally couldn’t have gotten any worse. After the race Tomac said he’d tried to play things defensively, which didn’t work. At all.

“The first turn was just a joke, I was way out in the back,” Tomac said in the post-race press conference. “I went defensive and that did not work. Mookie [Malcom Stewart] was on the inside and [Justin] Barcia was on the inside. The first lap was chaotic. I made a few good moves on the first lap. I felt like I made good passes compared to the previous week, in getting to the front. So, I’m satisfied with that ride.”

“At this point I might as well just let everyone go and just roll [the start],” Tomac said with apparent disdain later in the presser.

At that point it certainly looked as though Tomac’s chances at clinching the championship were completely gone, and that he might even give up a big chunk of points to his title rivals. Neither Webb nor Roczen were leading, Zach Osborne was, but they were up front, while Tomac was marooned at the tail end of, well, literally everyone. We’ve seen races here and there where he’s struggled to come through the pack too. Tonight, however, was not one of those races. In what seemed like mere moments Tomac had already made jaw-dropping strides. After just a single lap Tomac had already sliced his way up to twelfth, and as his charge continued, it became apparent that he was going to catch the lead group. When he did he went to work getting by the likes of Jason Anderson, Roczen, and Osborne, who led twenty-two of the race’s twenty-nine laps. With plenty of time left it looked like Tomac was going to put the finishing touches on yet another signature charge by passing Webb and clinching the title. A very stubborn Webb wasn’t on the same page, however, and somehow seemed to find another gear and never let Tomac get close enough to make a move. When asked if he was trying to take this thing down to the wire, he quickly confirmed the motivation.

“Oh for sure,” Webb quipped. “We were all riding really strong, and Eli was ripping some really good lap times and he caught up to the pack. I know kind of how the Honda sounds, and I know how the Kawi sounds, and I saw him behind me and I was like, ‘It’s game on. It’s time to go.’ He’s got a nice points lead, but I wanted to at least make it to Sunday and see if there’s any hope. Overall it was a good night. To be able to at least take it to Sunday, there was motivation there. And, me and Kenny are really tight in the series too. There’s always motivation.”

Webb, who somehow recorded his fastest lap on lap twenty-five, also explained that an adjustment in the whoops helped him find that extra speed when he needed it most.

“I felt pretty good in the beginning, but I switched lines in the whoops and when I did that I felt like my whoop speed was a lot better,” Webb explained. “It opened up that turn and kind of all came together. It was good to be able to make that adjustment during the race.”

As for Osborne, the Rockstar Energy Husqvarna Factory Racing rider explained that while wanting to win one of these races is indeed something he wants to do very badly, he’s also happy to be putting in some strong rides at the end of the season.

“Gaining the momentum I have, and turning around a dismal season, from a massive injury and getting some results is good,” Osborne said. “I came here to get results and right the ship before we start this outdoor season. It’s cool to be climbing in points in the premier class in the world in my opinion, but the main goal right now is results. After leading probably forty-five laps since we’ve been here, I want to win one.”

Osborne chalked his handing over the lead late in the race to simply giving into the pressure.

“I was just like five laps short tonight. At the end, yeah, I just let it go, maybe the mental side of things got to me and I buckled under the pressure,” Osborne admitted. “It is what it is. I’m kind of in uncharted waters. I feel good about my third, but it would have felt good to hold on for those last two minutes and take the win. But there’s still one more on Sunday and I feel really good about my whole package right now.”

Roczen ended up fourth on the night, and as a result, has been mathematically eliminated from the championship hunt.

In the 250 ranks, Shane McElrath came into the night trailing Chase Sexton by three points. A win would guarantee at least a tie heading into the final race of the season, but a win for Sexton would mean McElrath’s deficit would increase to at least six, which is exactly what happened. McElrath led in the opening stages, but after a few laps Sexton took charge, putting a hard, full-contact pass on McElrath that stood the Monster Energy/Yamalube Star Racing Yamaha rider up while Sexton squirted away and disappeared for the win.

“I knew I was good in that rhythm section and I knew I could get close to him,” Sexton said. “It was pretty aggressive but I knew I didn’t want Shane to have another chance to get back at me. From there I just tried to sprint away and then I had to deal with lappers.”

Afterward McElrath explained that he and the teams were chasing things throughout the day.

“Today, I was happy with my main event, with the way I rode, I just was a little bit behind all day,” McElrath said. “The track was a little soft and we made some changes. All day we were just a little bit behind. We were making the necessary changes, but we were just a little bit behind. It was a bummer, but it was like, ‘Okay, let’s do it.’ In the heat race I felt good, and in the main event I felt good. I got out front felt like I had a good pace going and just needed to clean some things up. But Chase [Sexton] got around me and pulled a little gap. I had laps in a row where I’d catch him, then he’d pull me back. I don’t have anything to lose, so really, the only pressure I put on myself is that I’m so close and I want to win this thing. But the pressure is all on him.”

Added Sexton, “Six is definitely better than zero, but at the same time it’s not that big of a gap. I still have to go out there and do good. I really focused tonight on doing consistent laps and keeping the pace. Other races I’ve kind of fallen off later in the race. It was a solid night, I liked the track, the dirt was really good, and I’m looking forward to Sunday and putting this all together. I’m sure it’s going to be pretty chaotic.”

Rounding out the podium was Colt Nichols, who seemed upset with his performance, despite landing on the podium. He also replied, when asked about it, that while he’d like to be a factor in the upcoming 250SX title brawl on Sunday, simply doing well is his main goal.

“The way I rode tonight was unacceptable and I started horrible,” Nichols said. “I just want to get out front and do what I can do, and if I need to do whatever I’m sure we’ll talk about that and see what we can do. I know the team wants to win the championship, and I want to see these guys do well. But I’m fighting for myself. At the end of the day I don’t really care, the championship is going to work itself out on both coasts and I just want to be there to mix it up.”