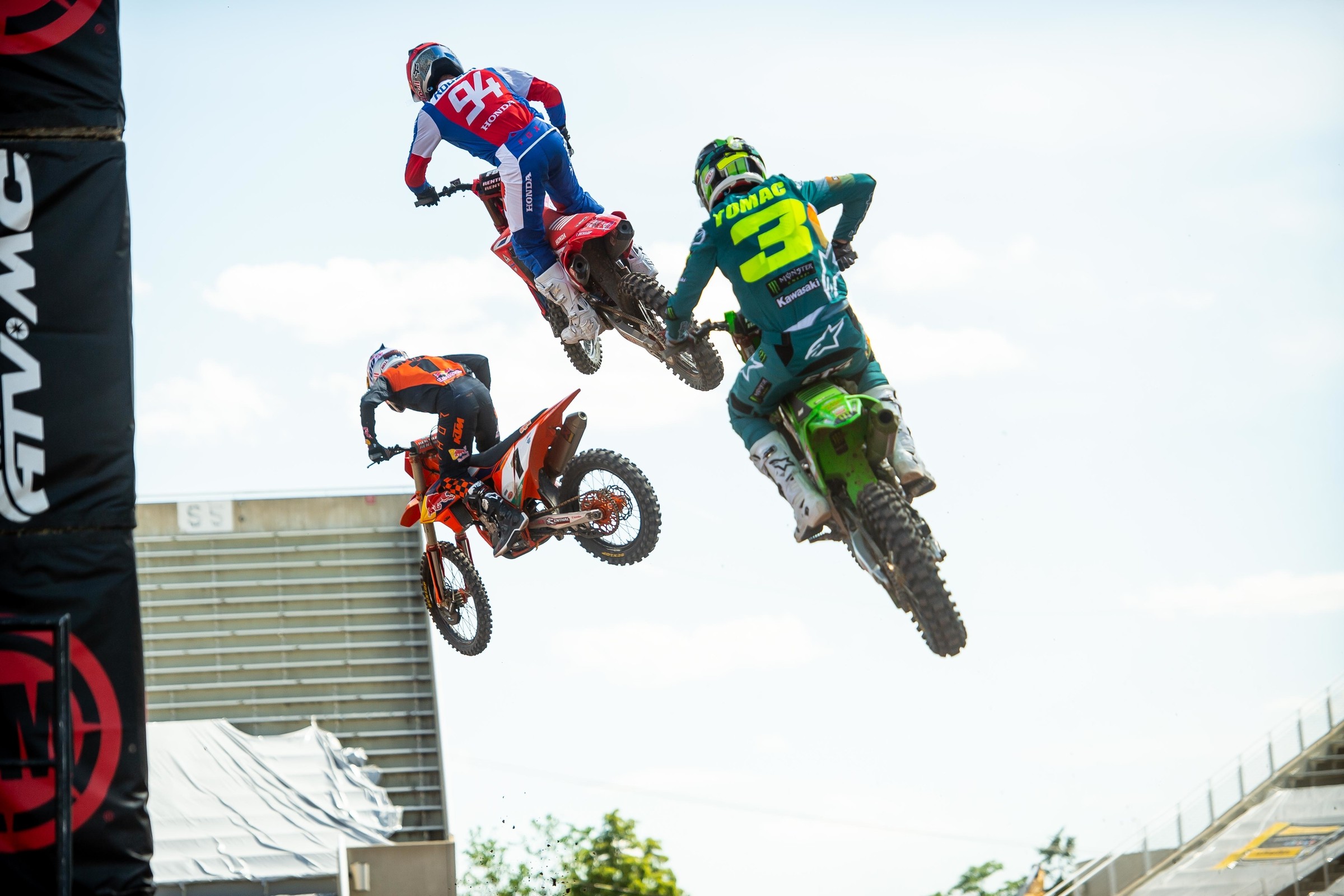 There was nothing normal about last Sunday’s race in Utah, and we’re not talking about just the empty stadium. The temperature, which was roughly ninety degrees, did a number on the track, resulting in a very dry, dusty, and slick racing surface. Chad Reed also reported issues of boiling fuel. But with Wednesday’s race taking place at night, the heat shouldn’t be an issue, and the track should be a totally different animal. We’ll see if that has any effect on how the racing plays out. –Aaron Hansel

Although Ken Roczen gave up five points to Eli Tomac on Sunday, it’s not exactly a disaster. Would he have liked to even things up, or even take over the lead? Of course! But with six races left, he’s got plenty of time to erase the eight-point deficit he’s currently facing. He can’t afford to let Tomac continue to widen the gap though, and it’s important for his title chances to get some of those points back on Wednesday night. –Hansel

If you’re Shane McElrath you can’t be much more excited how Sunday’s racing played out. The Monster Energy/Star Racing Yamaha rider dominated, holeshotting and leading every single lap on his way to a perfect victory. He also closed the gap between himself and 250SX East points leader Chase Sexton, who finished second, and is now seven points behind with four 250SX East races remaining. He’s still got some work to do, but if he rides like that in the upcoming weeks this title fight is going to get wild! -Hansel

Watching his title rival control the race is the last thing Sexton wanted to see in Salt Lake City, but there sure didn’t seem like there was much Sexton could do about it. McElrath was riding incredibly well, and when Sexton started putting a run together he simply wasn’t able to pick through lapped traffic cleanly and never put any real pressure on McElrath. We’ll see if Sexton can rebound and click off a win come Wednesday night. -Hansel

Thanks to a shoulder injury suffered last year, Colt Nichols isn’t a factor in the 250SX East Championship. That doesn’t mean he doesn’t want to be a factor in the races though. “I’m happy and I just kind of want to go out there and send it, to be honest. I have nothing to lose, I’m not in the championship hunt,” Nichols said when we interviewed him last week. He got caught in a pileup early on Sunday and never got the chance to battle up front, but we’ll see what happens when he lines up again on Wednesday. -Hansel

Eli Tomac’s next win would tie him with Ryan Dungey for sixth all-time on the premier class main event win list. The Monster Energy Kawasaki rider has claimed six of the 11 races this year and doesn’t seem to be stopping that trend any time soon. Obviously Eli’s eyes on are on the 450SX championship but a damn good way to make sure he gets said title is to put his head down, get wins, and lets the points handle themselves. Does Tomac tie Dungey’s record in tomorrow’s Wednesday night supercross or does Roczen, Webb, Anderson, Cianciarulo or someone else take another win before Tomac can? -Mitch Kendra

Hansel covered the surface of the track above but I’m going to hit on the layout of the track for the second SLC round. Feld Entertainment said they would have seven different layouts for each SLC round but with the quick turnaround from Sunday races to Wednesday races, there would not be as drastic changes. This is evident in the track build for round 12. While a majority of the lanes are the same as they were for Sunday’s first race back, the rhythm lane, obstacles, and flow is a bit different. On Sunday, the first turn led into a sweeping left-hand turn but in tomorrow’s race, riders will barrel down the starting straight into a right-hand turn. While the 2020 Indianapolis Supercross track featured a right-hand turn out of the gates, that event was not race so we will now see the first right-handed start since the 2016 San Diego 2 Supercross. Want to know how uncommon right-hand first turns are? Our online content editor (and very nonweldable video game user) Kellen Brauer said all three versions of Monster Energy Supercross – The Video Game have custom track creator editor capabilities and NONE of them will even let you begin a custom right-hand start! The video games won’t even let you experiment with them! The track tomorrow will flow the opposite direction from Sunday’s race but the sections will feature different jump combinations and builds. The track map appears the build will be more challenging than the first race back on Sunday but we will have to wait and see once the Dirt Wurx crew have finalized the construction of the track. Take a look at Sunday’s map compared to tomorrow’s track below, Salt Lake City 1 on the left and tomorrow’s Salt Lake City 2 on the right for comparison. -Kendra

Sunday’s race was a little different than normal supercross events when it came to the race day schedule. The day race (in the heat in Utah) had a unique schedule where the 250SX LCQ followed the two 250SX heat races with only a  20-minute gap between—the 450SX race schedule followed the same procedure with the LCQ only 20 minutes after the completion of the second heat race. For riders and teams—privateers especially—this quick turnaround limits the ability to make major changes to bikes. However, tomorrow’s race will follow a typical supercross schedule: racing at night (10 p.m. EST/7 p.m. PST start for the night show) and a normal procedure with the 250SX heats, 450SX heats then the 250SX LCQ followed by the 450SX LCQ. The social distancing protocols for the mechanics and team members are still expected be in place but this typical schedule allows for more of a window between heat races and the LCQ’s, which might be costly if mechanical issues arise for championship contenders. View the full race day and broadcast schedule for the Salt Lake City 2 Supercross for more exact details. -Kendra

Both the 250SX and 450SX riders put down a lot of laps on Sunday during the respective main events. The top 250SX pack lapped all the way up to fifth place while completing 22 laps and the 450SX main event saw everyone from 12th place and back get lapped as they completed 29 laps (at about 43 to 44-second lap splits in both classes). During the virtual press conference following Sunday’s race, several riders, including Sexton and Tomac, acknowledged the quick lap times resulting in a lot of laps and lapper traffic. The tighter stadium floor at Rice-Eccles Stadium limits what Dirt Wurx can do compared to venues such as State Farm Stadium in Glendale, Arizona, but that doesn’t stop the crew from taking advantage of every part of it. Will lappers come into play tomorrow? If so, watch who can navigate through the traffic best as the main event winds down. -Kendra

We all saw Pierce Brown go down early in the 250SX main event but you might have missed that he clawed his was back to fifth place by the end of the race. Along with Brown, Kyle Peters (sixth) and Jalek Swoll (seventh) each had sneaky good rides of their own. Peters is coming back from an injury (broken hand suffered in Arlington) and was looking quick in qualifying and in the main program, and Swoll improved his season-best by two spots on the slick surface. These two are looking to slot into the top five-positions and will get another crack at doing so tomorrow night. And for Brown, who started in fifth until a collision with Jo Shimoda that sent him sideways and into Colt Nichols, a good, clean start could see the Utah native on the podium with clean air ahead of him. Also, if you’re reading this Pierce, can you post clips from your sweet GoPro that you cut and placed into your front number plate? Asking for a friend. -Kendra