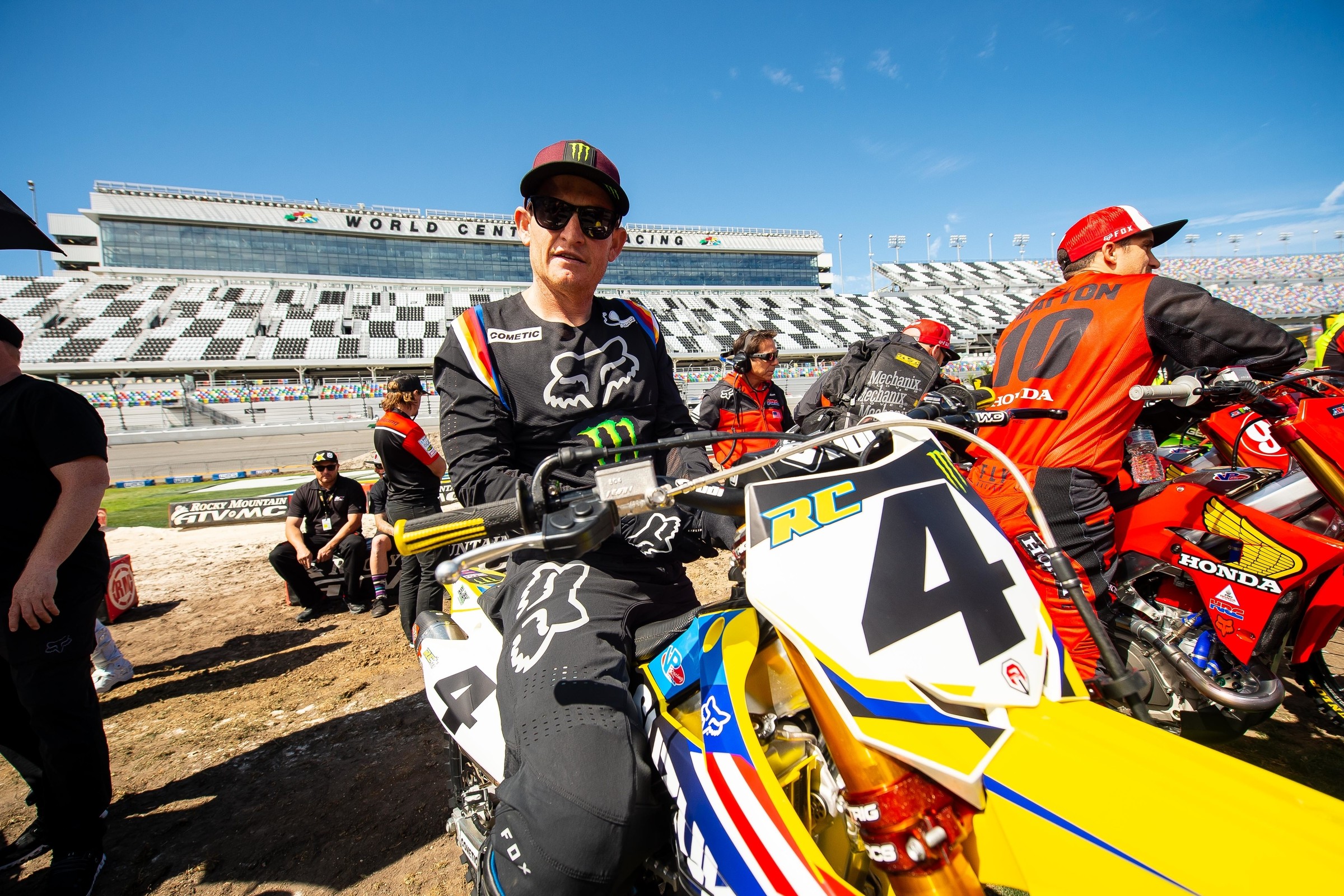 As we get ready to continue what will undoubtedly be the strangest season in supercross history, we check in with a man who has seen his fair share of wild championship runs. Ricky Carmichael will be in the booth for these final seven rounds of supercross and he spoke with us to offer insight into what these riders may be going through. Without question, the long hiatus of racing will be a talking point throughout the weekend, and the GOAT believes the stark momentum shift will be a tough challenge for all riders to deal with.

Racer X: Ricky, how in the world are you?
Ricky Carmichael: I’m good. I’m good, I just picked up a mountain bike here at the Trek dealer here in Salt Lake City and I’m now headed back to Park City.

Very good, my man. How long have you been in the racing-friendly metropolis of Salt Lake City?
Oh, I just got here yesterday and got all situated. My girlfriend’s best friend has a place in Park City, so I’m staying there, so that’s nice. I went and got all my COVID testing done, so I’m waiting to get the results back from that. If that comes back negative, we’re ready to rip, man! I’m just hanging out and waiting for results, so that’s why I had to get here early. With the flights and all that stuff yesterday, we didn’t know if they would be delayed or whatever, so I didn’t want to chance it.

We’ve known each other since you were racing minicycles. A very keen sense of the obvious question here on my part, but what in the world do you make of all this? Seven races and the 2020 Monster Energy Supercross Series title to be decided in an NCAA college football stadium in Utah?
Well, it’s not charted waters. First and foremost of what I can say is that whoever wins this championship, in my mind, will be and should be crowned as the winner of the hardest Monster Energy Supercross Series Championship in history because of what we’ve been faced with as far as the pandemic. Being in championship form and then having to be forced into a 12-week shutoff and then to now be forced to get right back into it, both mentally and physically, I feel, is going to be a really tough challenge. The guy that is able to do that the best and continue the consistency and the good race craft and being up front when he needs to be up front, is going to be the guy who is going to be victorious. And I’ve been in some great championship battles throughout my career. Two thousand and six  comes to mind where it was basically winner take all at Vegas for the title and I still think this is going to supersede that season as the greatest championship in supercross history. I’m excited, but at the same time, it’s uncharted waters for everybody.

Okay, my man, you won a few of these things. If you were standing in, say, Tomac or Roczen’s boots, what in the world would you be thinking? Such a profoundly odd set of circumstances, eh?
Yeah, I mean those guys are back-and-forth each weekend. There are three points separating them and you can pose situations on both riders of why they have a better chance than the other. Eli, you know, you think he has an advantage as he lives at elevation and the Sat Lake City race is going to be at elevation. Then you go to Ken Roczen, and he’s led more laps than anybody this year. He doesn’t have as many wins, but he’s upfront a lot more often. His chance of winning are just as good as Eli’s, so they both have their strengths. There is no doubt that these two have very few weaknesses. And there is one guy still looming and that’s defending champion Cooper Webb. I feel he has a chance, but he’s going to need a lot of help. I mean it’s far-fetched, but mathematically, it’s still possible. He’s capable of it, but he’s in a must-win situation and that’s a bad spot to be in.

Yeah, and there are a few other guys that can throw a spanner in the works, as well, huh? I mean, [Justin] Barcia, AC [Adam Cianciarulo], [Jason] Anderson…
Yeah, well, certainly so. We just switched gears from talking about championships to winning races. Like AC, I feel like this is a second season for him. He got his rookie season out of the way ` going to be up in the mix. That can really work, whether it’s to Eli Tomac’ or Ken Roczen’s benefit, that can really get in-between one another, so it’s going to be exciting to see just what guys are going to take advantage of everything that has went down and the opportunity to come out and excel. For instance, AC  can win his first premiere win in supercross? Can Barcia come out and get another win and his second win of the season?

Exactly! I can also see a Malcolm Stewart or a Justin Brayton coming out of the woodwork and winning one of these things.
Yeah, certainly this is a time of… I don’t know… It’s a different time, for sure. Crazy things have happened. Yeah, at the end of the day I think it’s going to be tough because I feel like what we’re going to see and find is that the championship contenders are going to somehow find their way up front. It’s crunch time. We only have seven rounds left and these things are going to fly by in three weeks – seven races in three weeks! We’re going to finish one race and before we know it, we’re going to be back at the stadium and these guys are going to be getting it on. As it’s an opportunity for guys like the Braytons of the world and the Malcolm Stewarts and the Adam Cianciarulos of the world to excel. Having said all that,  just feel like the championship contenders are going to find their way up front.

Hey, I wanted to ask you about the first few NASCAR races that have run on track and on TV. Have you watched the races, and if so, what have you thought?
I mean I love NASCAR, as you know. I have a love for it. Yeah, I’ve been tuned-in and the tracks have been great and the competition has been great and it was so refreshing to watch a live sports event.