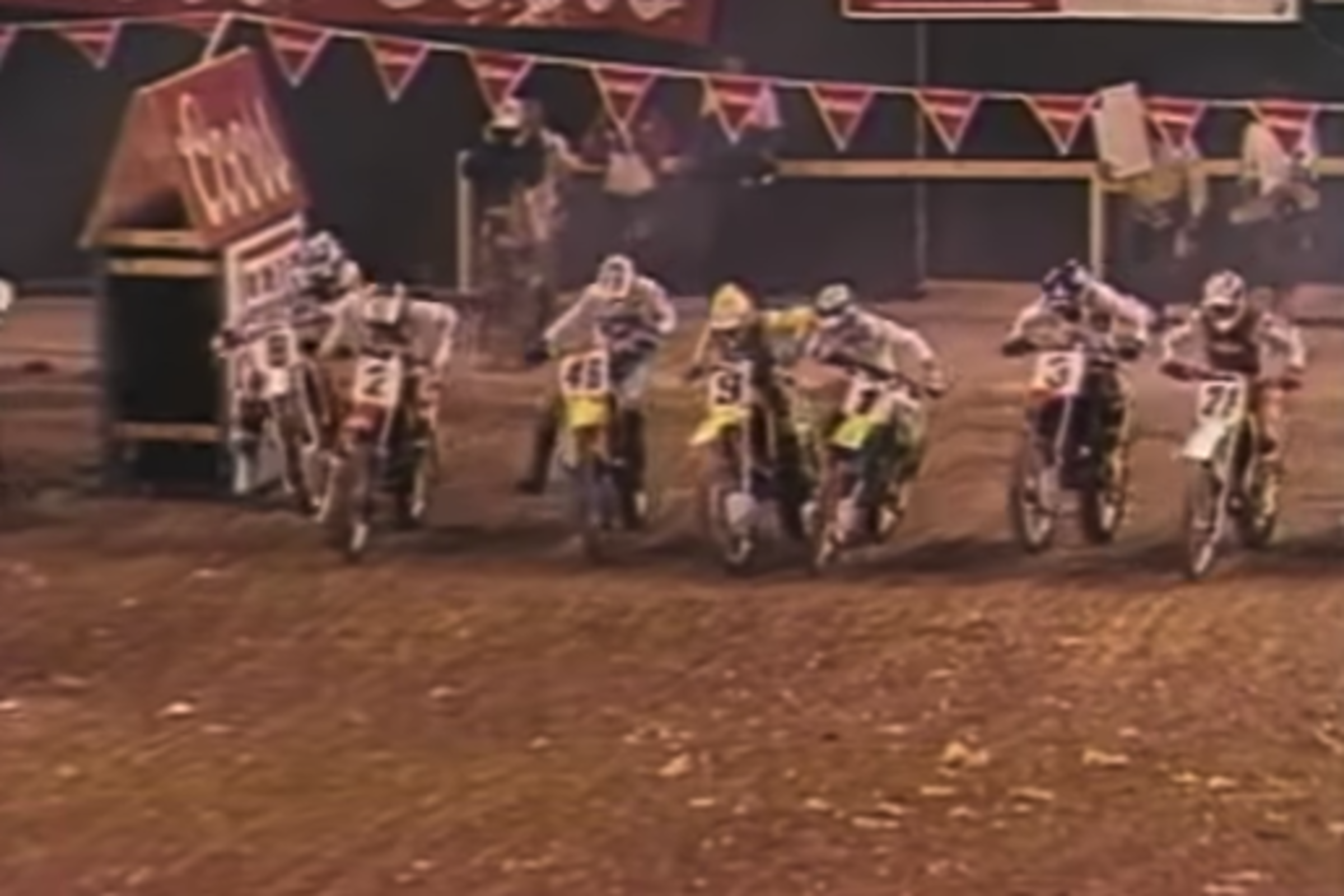 We can only breakdown the most recent round of Monster Energy Supercross so many times, but until another race—any kind of race—is run, the 50th Daytona Supercross is going to be on a near-constant loop for us bench-racers and analysts. So rather than take yet another look back at Eli Tomac’s late-race pass on Ken Roczen, how about using your next session in front of the computer checking out the evolution of the sport over the years? As they say, if you don’t know your past, you won’t know your future… This is a random sampling of free motocross media that you can find on YouTube. Think of it as part one in a series!

Let’s start way back in 1947 with this short film from France. Mind you, this was about two years after the end of World War II, and the world was just getting back to some kind of normalcy after the largest war ever fought. This is Montreuil-sous-Bois circuit, which was in an old rock quarry. This is five years before the FIM Motocross World Championships were ever run. The Englishman Bob Foster wins the race.

Let’s skip up to 1957 with the French 250cc Grand Prix, also known as Le Coupe d’Europe. This was the first year for the 250cc World Championship. The eventual champion would be Fritz Betzlebacher, a Maico rider from West Germany.

Fast forward to 1959 and color film. The legendary Hawkstone Park in Great Britain, which is still in operation, though no longer a Grand Prix facility. This one offers a history lesson too on the birth of motocross racing in the 1920s. The bike sounds may be piped in, but it’s still an amazing old short on scrambling.

“Look at Life” was a British documentary series that visited various topics of everyday life. One episode was a look at Scrambling in the 1960s, scrambling being the British term for motocross. It’s a very well done film and, at more than 1.5 million views, popular as well!

Here’s a game-changing season if there ever was one: Suzuki’s first full-season in the FIM Motocross World Championships, 1970 with Joel Robert and Sylvain Geboers, which really signaled the beginning of the Japanese domination of motocross:

This Spanish newsreel shows a big day in motocross history, April 8, 1973. This is the day that Jim Pomeroy enters his first-ever 250cc Grand Prix in Sabadell, Spain. The Bultaco rider from Washington state had been invited by the factory to come and compete in their home GP. Pomeroy, wearing #26, wins the overall to become not only the first American to win a Grand Prix, but also the first man ever to win on a Spanish-built motorcycle. Ironically, a mix-up with scoring had the officials at first reward the overall to German rider Hans Maisch, who went 2-3 in the motos to Pomeroy’s 1-4. In the scoring of the time Pomeroy’s motos gave him 23 total points to the 22 for Maisch.

One of the best motocross films we’ve ever found is this music video from the 1978 Austrian 250cc Grand Prix at Schwanenstadt. It’s set to a U2 soundtrack and features the craziest start we’re ever seen! Look closely and you will see such Grand Prix legends as Jaroslav Falta, Gennady Moiseev, and Thorlief Hansen.

“Scramble” was a 1981 short film about local motocross racing in England. It was shot by Syd Pearman. Just seeing the bikes of the era and the way they even got them there from home is really cool. Pearman wrote of the film, “When we decided back in 1980, that we would like to make a film about scrambling we thought that some slow motion would be a good idea, preferably in the rain so that mud being flung from the bikes might look good. We went to three meetings but there was never any sign of rain when we turned up—in fact it was almost a guarantee for the organizers of a fine day if we attended. In the end we did the film in the sunshine and the slo-mo wasn't too bad in all the dust. . . . But see what you think.”

There’s no announcers on this 1983 Finnish 125cc Grand Prix, but the sounds of the bikes are worth the watch! #1 is Eric Geboers on a Suzuki, and #16 is “Gentleman” Jim Gibson on the white Yamaha.

Here’s another glimpse of California’s Gibson in Europe, this time at the sandy Dutch track at Best. Geboers ends up the winner, but Gibson’s second in the sand is a shocker.

Here’s what AMA Coors Supercross looked like in 1988, voiced by the legendary Larry “Supermouth” Huffman, including a classic battle between the two biggest superstars of supercross in the late 1980s, Rick Johnson and Jeff Ward, plus Broc Glover, Ron Lechien, Jeff Leisk and more. (And if you’re wondering what all the white trash on the track is, it’s the plastic field covering from previous years that the track crew ripped out when they took the previous tracks out of the building, and didn’t ever get around to cleaning up!)  And you’ll love this: “Wardy’s on him like a bloodhound!”

Finally, here’s a French documentary on Jean-Michel Bayle’s homecoming race in 1990, the Masters of Motocross, at what looks like Ernee, France. This was just before his second year in America, when he dominated the AMA circuit and taking all three titles: SX, 250 MX and 500 MX. The film is French but features Donny Schmit, Stefan Everts, John Van den Berk, Yves DeMaria, and more.