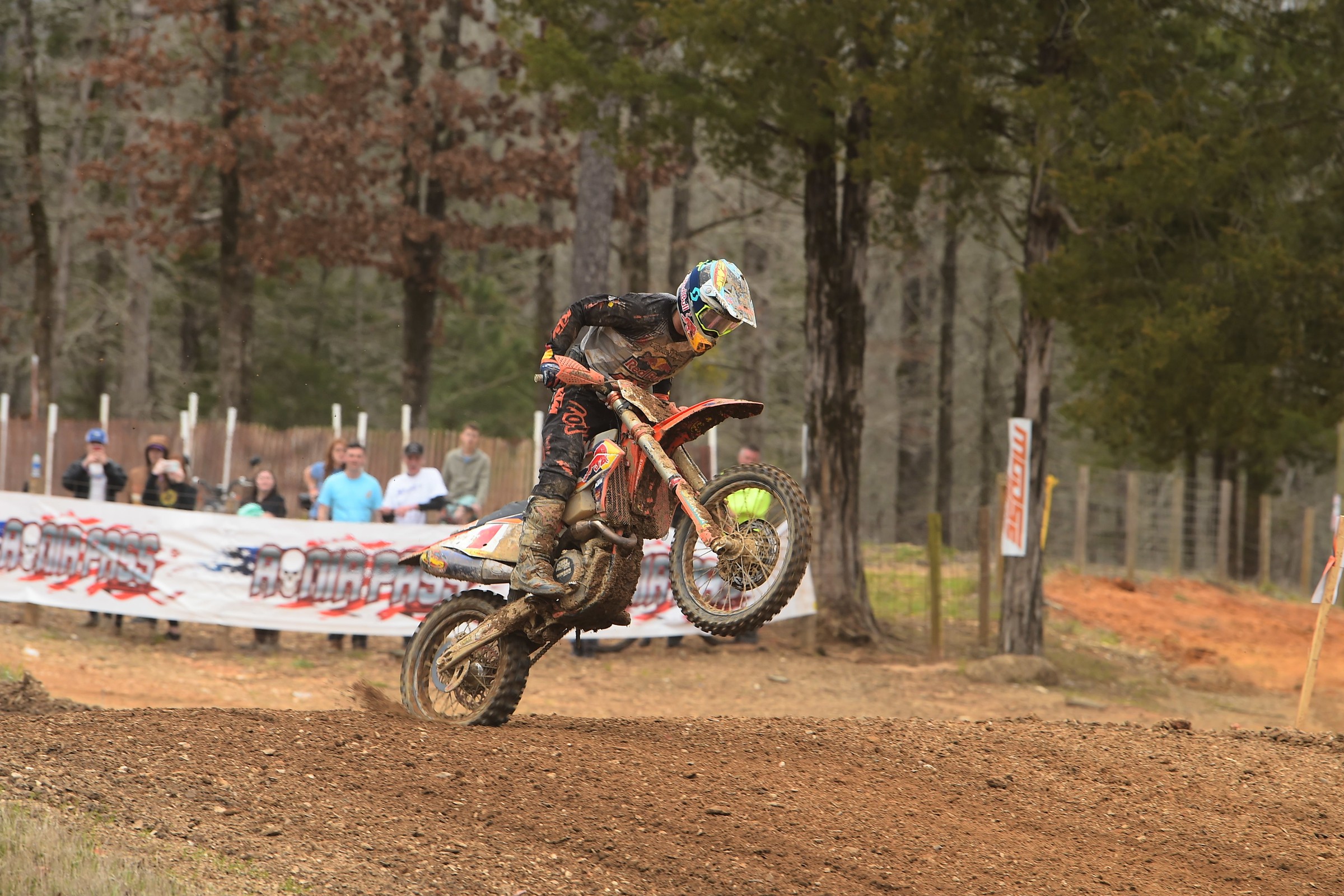 Typical GNCC events are separated by a two- or three-week break. This allows racers time to recover from the grueling three-hour events, and gives the numerous amateur racers the opportunity to re-prep their machines. However, it’s also tradition that the Florida and Georgia rounds of the series take place on back-to-back weekends at the beginning of the season.

These whirlwind events see riders finish the Florida round and immediately get ready to transition to the red clay in Georgia. It can sometimes play a big role in the outcome of the race as well, and this year was no exception. Here’s what we learned.

Steward and Grant Baylor’s switch to the FactoryONE Sherco team has been one of the biggest storylines of the season. We’ve mentioned previously that Sherco is an unproven brand at the top level of GNCC Racing, as there were no XC1 competitors aboard the brand until this season. It’s ultimately a learning year for the Sherco guys as they’re making adjustments as the year wears on. The Florida round was a tough event for them as Grant suffered a freak issue with his gas tank, and an electrical issue ended Stu’s day on the second lap.

When they rolled into The General in Georgia, these boys were motivated to bounce back from the issues in Florida. Steward took the lead on lap two and bounced back and forth with Kailub Russell for the rest of the race. Pit stops would prove to be the ultimate challenge for Stu because the Sherco brand is still so small and boutique that it’s extremely tough to find aftermarket parts for them.

While this proved to be a big thorn in Steward’s side, his performance at The General shows that he, and Sherco, are very capable. In fact, it looked as if Stu was going to hold on for the race win, until the final turns of the race. He even overcame his longer pit stops by getting back around Russell for the lead (as Russell had a day filled with mistakes). We’ll talk about the final lap in the next segment.

As with any growing brand, it takes time for aftermarket parts to come available but the number of racers on a Sherco at the GNCC events has grown tremendously this season, and all of these racers are looking to part suppliers for products. They’ll be taking notice and producing those items that are currently unavailable, and that could have a huge effect on how both Baylor brothers are able to attack the GNCC events.

Three events down in the 2020 GNCC Racing season, and Kailub Russell has won all three. KR spends his winters training in Florida with a slew of other riders at his own Ranch Russell. This property is actually not far from the facility which hosts the Wild Boar GNCC, so the terrain is very similar. Kailub put together a dominating performance in Florida, leading the race wire to wire for the win. In Georgia, however, Steward Baylor would challenge him throughout the entire event.

Russell found his way into the lead on lap four, but Stu would come back to lead lap five. This set up a battle through the final lap where these two would eventually emerge from the woods, onto the Aonia Pass Motocross facility for the final turns of the race. This final section of the track saw the course run onto the motocross start, around the first turn, then make a hard left over a tunnel jump and two tabletops before turning off the motocross track and into the GNCC finish line area.

Into this final stretch, Baylor would hold the lead with Russell right on him looking for every opportunity he could find.

Russell ran wide through the first corner to try an outside line, but Baylor held him off. However, Baylor would be on the gas a little too hard, as he drove into the tight corner over the tunnel jump just a little too hard. That sent him outside in that corner, and Russell was able to get inside and make the pass for the lead with just three turns to go. Baylor never gave up, but with no opportunity to make a pass in those final corners, Russell would go on to take with win just over a second ahead of Baylor.

This would prove to be one of the most exciting GNCC finishes in the past few years and Stu had no problem admitting he threw it away in the final corners. It wasn’t a race win, but it’s still a huge moment because it sets Baylor back up, now that the Sherco is proven, to be one of Russell’s key competitors for race wins.

For Russell, who admitted it wasn’t a great day for him, it’s still impressive. He was able to keep an eye out for opportunities to make passes, and is still up there at the end, even if most of race didn’t really go his way.

The Monster Energy/Babbitt’s Kawasaki boys, Josh Strang and Jordan Ashburn, have been riding really well this season. While Strang has struggled mildly the past few seasons, the 2010 GNCC Champ is still showing that he’s not done yet, landing on the podium at all three rounds so far in 2020 (he’s gone 3-2-3). He wasn’t too far back from the Baylor/Russell battle for the most of the day in Georgia. It seems odd to say, but Strang is now the oldest rider in the XC1 class even though he’s only around two years older than Russell. With age comes wisdom, and since Strang came into the pro ranks at such a young age, he’s now considered the savvy veteran rider of the XC1 class.

Many are beginning to wonder if Strang can get back to the center step of the podium by the end of the season. It’s been a few years since Strang has won a GNCC event, but he’s no stranger to winning. That would also be a big win for Kawasaki if he can get it.

His Kawasaki teammate, Jordan Ashburn, has ridden really well in the early stages of all three races this year. Ashburn even led the opening lap of The General, but he has been struggling later as each race wears on. While Ashburn has never won a GNCC event, he’s had his fair share of podium finishes and knows how to finish strong, it just hasn’t all came together just yet in 2020.

This season, the XC2 class could very well be the most exciting championship race to watch unfold. With three rounds down, the XC2 class has seen three different winners, and through the entire race at The General, those three riders battled wheel-to-wheel. Coming into round three, Am-Pro Yamaha’s Mike Witkowski and Trail Jesters KTM’s Johnny Girroir sat tied for the XC2 points lead. However, The General race win would go to Rockstar Energy Husqvarna’s Craig Delong after a race-long battle between all three.

Delong would lead the opening lap, with Witkowski taking over the lead on lap two. The battle was intsense, as at the conclusion of each lap, these riders would never be separated by more than six seconds!

Girroir took second, edging Witkowsk to take over the XC2 points lead. For Girroir, this season is already a dream year. The Massachusetts native is one of the friendliest riders in the pits, and had a pretty big health scare in 2019 when his after misdiagnoses indicated he had cancer. Girroir had a few XC2 podiums in 2019 before this health scare, but would sit out the last half of the season to focus on his health and prepare for 2020.

As for Witkowski, the Indiana rider has been in the XC2 ranks for a few years now and rode a couple of seasons as part of the Factory Beta squad. He landed several podium finishes but an XC2 win eluded him. For 2020, Witkowski joined the AmPro Yamaha team, backed by seven-time National Enduro champion Randy Hawkins. It paid off as Witkowski won his first GNCC event aboard the Yamaha and has been on the podium in the other two rounds.

Delong also has a unique storyline for 2020. Having ridden for the Coastal Racing Husqvarna squad since its inception in 2016, Delong has been one of the most consistent riders in the XC2 class. While he hasn’t been able to land the championship just yet, he’s been incredibly strong each season. After Thad Duvall and Trevor Bollinger were both injured, Delong was called up to the Rockstar Husqvarna Factory Racing team for the remainder of the 2020 season. Now with a win under his belt and under the full factory team, things could mesh well and set up a three-rider battle for the XC2 class title.