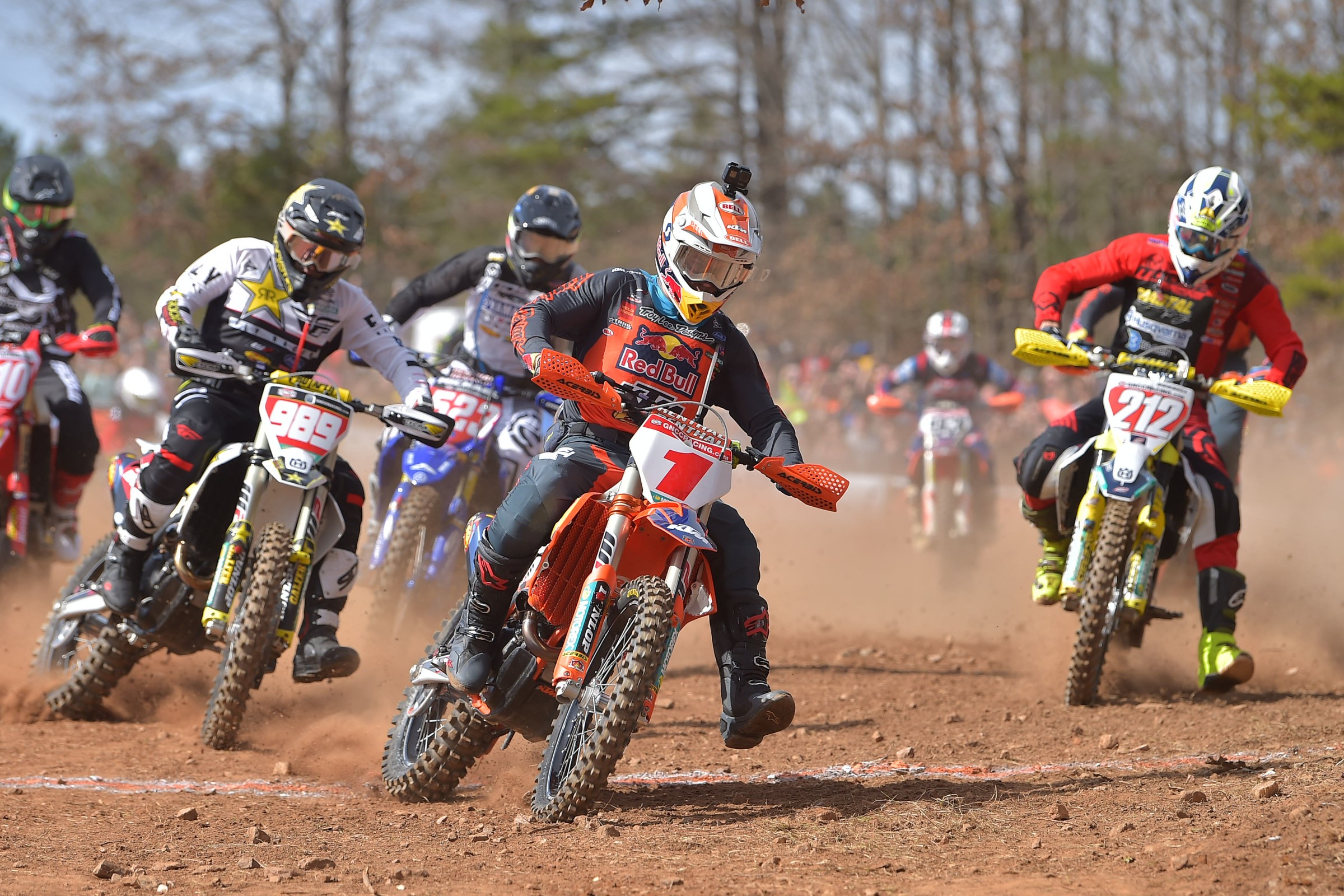 GNCC Report 7 Things We Learned at the Big Buck GNCC

The opening round of the 2020 Grand National Cross Country (GNCC) Racing season brought  one of the best courses Big Buck Farm has ever produced in its 23-year history with GNCC Racing. Rains leading up to the even left many wondering if the race would be a mudder, but with a full day of sun on Friday and ATVs pushing off slop early Saturday, Sunday’s race saw some of the most epic dirt the South Carolina course has ever seen. Here’s what we learned.

Kailub Russell made a statement at Big Buck, and that statement was that just because 2020 will be his final full-time season of racing, it doesn’t mean he’s not still on top of his game. KR grabbed the holeshot and never looked back. He would ride a great race at a really solid pace and end the day on the top step of the podium with the win. Kailub’s closest competition at Big Buck would come in the form of the other Russell, Ricky Russell (no relation). Ricky would stay within just a few seconds of Kailub throughout the opening laps, but as the race wore on Kailub upped the pace and opened up a bit of a gap by the halfway point.

With 2020 marking Russell’s final full-time season, many were wondering what kind of ride we would see out of the seven-time champ. Would he play it conservative and let someone else lead early? Or would he check out and ride his own race? Would Thad Duvall challenge him down to the wire? Or would someone else step up to bid for the overall win? Well, Russell answered all of those questions pretty early with one of his more dominant rides in recent memory. As for a challenge from Duvall, we’ll discuss that in the next section.

For Kailub Russell though, it was a fairly drama free race. The only exception came early on when he took a different line than what some spectators expected. Coming down to the Big Buck Hillclimb, he dropped off the bank early, still within GNCC’s “25-foot rule,” which left a few folks scurrying out of his way. Other than that, it was just a really great ride out of Kailub and there’s not much to discuss other than the fact that the version of Russell heading to retirement looks to be stronger and faster than ever.

Thad Duvall has been Kailub Russell’s closest challenger for several seasons now. These two have been racing against each other for a very long time, even going back to their days as youth riders. Unfortunately, it looks as if 2020 won’t see many of those Kailub versus Thad battles we’ve seen in the past few seasons. Thad would come around on the opening lap of the race all the way back in ninth place. He would work his way into fifth on the second lap, but drop to sixth on lap three. Then, on lap four, Thad pulled into the Rockstar Energy Husqvarna pits and called it a day.

Thad would actually suffer a crash on that opening lap that left him with a knee injury. After fighting through the pain for two more laps, it just became too much and Thad was forced to pull off. While there hasn’t been an official announcement on the extent of that injury, Thad posted on social media saying: “See you all in a couple of months. Knees suck.” So unfortunately for Duvall, it looks as if his championship hopes for 2020 have already come to a close. This is a bummer because race fans really wanted to see one more full season of Kailub Russell versus Thad Duvall before KR steps away.

Right around the same time Thad Duvall pulled into the pits to call it a day early, Ben Kelley did the exact same thing. Ben had began his first full-season racing in the XC1 class after claiming last year’s XC2 title early, then winning two events overall from the XC1 class later in the season. This established Kelley as someone to keep an eye on in 2020, and many were wondering just how good he might be in his first full season of XC1 competition.

Unfortunately, we’ll have to wait to find out. Ben suffered a shoulder injury practicing the week prior to the event. He would start Big Buck with the hopes of salvaging points but the pain would prove to be too much and he would be forced to pull off after three laps. We’ve yet to hear an exact diagnosis but it looks as if Ben will be missing a few races while his shoulder heals. This may build up some serious excitement for his return because many folks are wondering what kind of epic race could ensue with a fully healthy Kelley against a healthy Duvall and K-Russell!

Earlier we mentioned that Ricky Russell would be Kailub’s closest competitor for the overall win, but let’s expand on Ricky’s ride a little further. Ricky made the switch this season to the Coastal Racing Husqvarna team after spending several seasons as part of the AmPro Yamaha squad. While Ricky had some great rides on the Yamaha, sometimes a simple change of pace can be a huge benefit for a rider and the switch to the Husky looks to be a good change for Ricky.

He would hold the second place position for the entire race, riding the majority of the first half of the event with Kailub Russell not terribly far ahead of him. This is pretty impressive as there’s been a number of times that the battles between Kailub and Thad have seen them establish a huge lead over the pack, so for Ricky to stay within a few seconds of Kailub for most of the race, really shows that Ricky has stepped it up for 2020.

This ride will make Ricky one of the guys to keep an eye on all season long. Ricky earned an overall win at Snowshoe a few years ago, so he knows what it takes to stand on the center step of the podium. With a little more time under his belt on the new bike, we very well could see Ricky challenging for more wins throughout the 2020 season.

Last season saw Babbitt’s Kawasaki make the move from Arenacross to GNCC Racing with veteran XC1 racers Josh Strang and Jordan Ashburn. The first season went really well with both riders running at the front of the pack several times throughout the season, and they even landed on the podium at one round, and were really close several other times.

The 2020 season kicked off in a big way for the Babbitt’s crew as Josh Strang landed on the podium in third and Jordan Ashburn finished in fifth. This is a huge confidence boost for Strang as the past few seasons haven’t exactly gone the way he has hoped. Strang is still really fast, but has just had some tough luck here and there that have kept him off the podium several times. However, the 2010 GNCC champ isn’t done yet and with a podium at the opening round one has to wonder what’s in store for Josh through the rest of 2020.

Ashburn is looking strong as well. He actually ran in the third place position for two laps, and with a little more luck on his side we could very well see Jordan challenging for the podium as well. He’s no stranger to the XC1 podium as he’s landed a good number of top three finishes throughout his career. Jordan’s only struggles have come late in the race when he’s found himself just far enough behind to make it incredibly tough to catch back up, but if he can find that little bit extra to stay up front for the entire event, Jordan will ultimately be a serious contender.

Big Buck would also mark Sherco’s debut in GNCC’s XC1 class. We’ve seen a few riders aboard Sherco machines give the XC2 and XC3 classes a whirl, but Big Buck would be the first time Factory Sherco mounted riders have lined up in the XC1 field. Steward and Grant Baylor both made the switch to the French-made Sherco brand after long careers aboard KTMs. Since the brand is new to the XC1 ranks, many folks were still unsure of what to expect but the Baylor Brothers showed that they are really capable machines.

It’s really tough to get a good gauge of what to expect out of a machine at a GNCC event until you actually race a GNCC event, so for Steward and Grant to put together the rides they did their first-times out, shows that they can only get better from here. Steward worked his way through the pack, coming from seventh on the opening lap to end the day just a few seconds off the podium in fourth place. Grant would finish in a solid sixth place, just around 11 seconds behind fifth place.

Ultimately these guys want to be challenging for wins, but a fourth and sixth place finish, respectively, are really solid in what could have been a real learning curve aboard the new bikes. The good news is that this event showed them what adjustments they need to make before the next round, and they could come into round two as strong as ever. As far as the Sherco brand is concerned, this is a win. In their first major outing in GNCC Racing, the brand landed inside the top five with one rider, and on the verge of a top five with another rider. This shows that these bikes should be taken seriously and could be a serious contender as the season rolls on.

With Ben Kelley making the move to the XC1 ranks, the door was left wide open for the XC2 class championship. Mike Witkowski made the switch to the AmPro Yamaha team for 2020, and in his first outing on the Yamaha, he was able to pull off his first-ever XC2 win. Mike has been a consistent podium threat in the XC2 class for several years, but just hasn’t been able to find his way to the center of the box. The win will leave Mike with a huge confidence boost and there’s a chance that he could be the guy to watch in the XC2 class this season.

Of course, Mike had to fight hard for that win. New Englander Johnny Girroir landed a few XC2 podiums in 2019, but a health scare ended his season early. Johnny is back in 2020 and supported by the Trail Jesters KTM team, which helped develop the careers of Ben Kelley and Josh Toth. Johnny led the early portions of Big Buck and ended up second place at the end of the day. With a few more races back under his belt, Johnny just may find himself with an XC2 win of his own.

Then there’s Craig Delong. Mr. Consistent once again found himself on the XC2 podium with a third-place finish. While Craig definitely wants to be challenging for wins, he’s still been the most consistent rider in the XC2 class for a number of years now. With a bit of luck on his side and those consistent finishes, Craig just might find himself challenging for the class title by the end of the season.