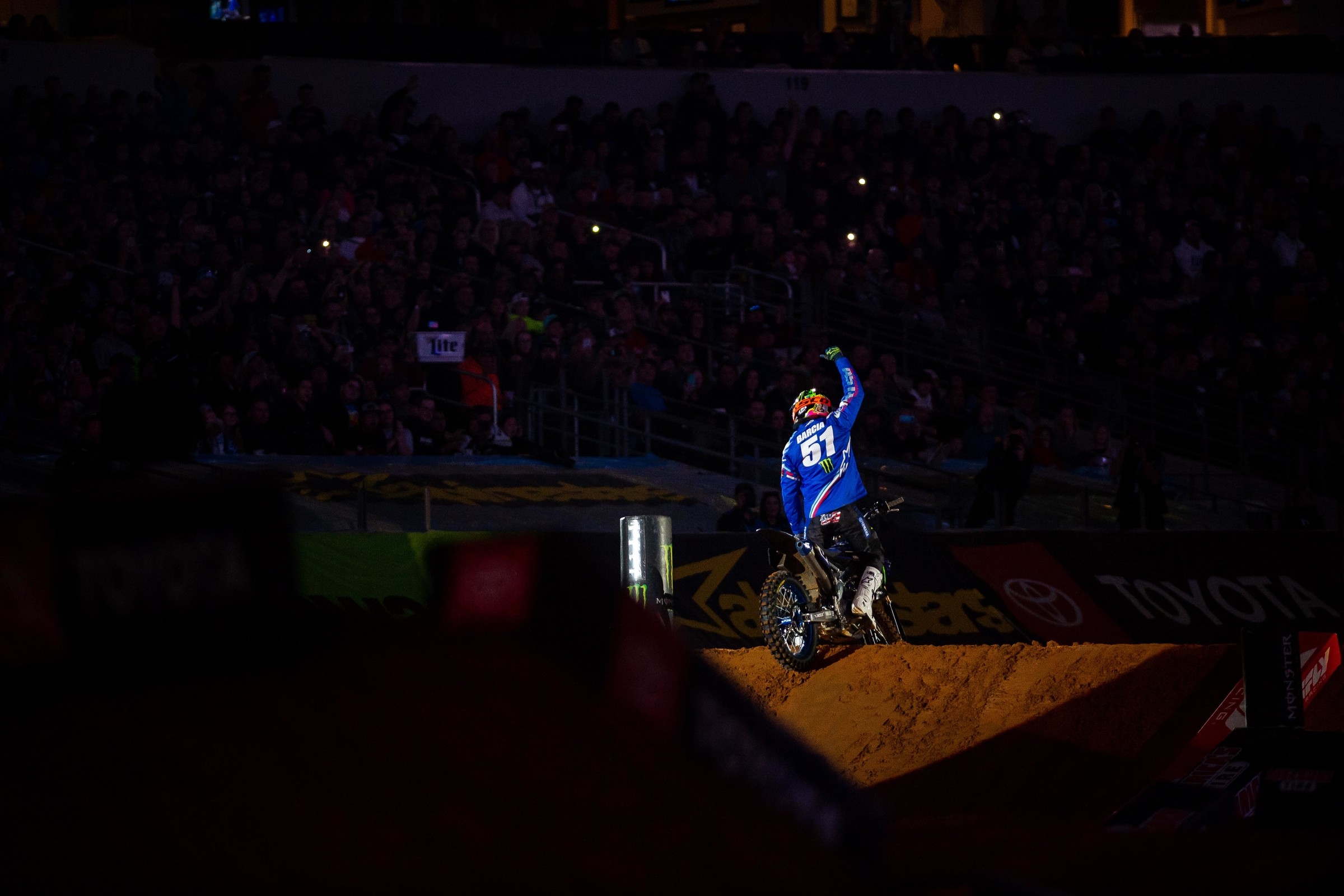 Eight rounds into the 2020 Monster Energy AMA Supercross Championship, Justin Barcia sits in a very comfortable fourth in the 450SX championship points. A win at the season-opening Anaheim Supercross was followed up resolutely with a runner-up placing at St. Louis. Hovering in and around the top five so far in ’20, Barcia has earned a very strong 4.5 average finish through eight rounds of the championship and has been able to keep chargers Eli Tomac, Ken Roczen, and Cooper Webb honestly and firmly affixed in his sites. Now a veteran of the sport, the New York native has always been competitive and shown flashes of winning speed, but truth be told, 2020 seems to be a little bit different for the Yamaha factory rider as the consistency—and perhaps even the patience—is very much in evidence. A few days removed from a spirited fourth-place overall finish at AT&T Stadium in the Lone Star State, Barcia spoke with us about his season thus far as well as his hopes and expectations come the finale come this May.

Racer X: Okay, my man. It’s the Tuesday afternoon after the Arlington Supercross. You went 4-5-4 in the Triple Crown format for fourth overall. You’re starts weren’t epic, but your racing and results were exemplary. Looking back over your shoulder on night Saturday, what do you think?
Justin Barcia: Yeah, for sure it was good. I had a great speed. I’ve felt that way the last few weekends and I felt great on the bike at Dallas. My starts were better than they were past weekend, so they’re getting better each weekend and I’m taking my time with that. I’m ready to get a holeshot and or even a top five start to make my life a little easier. All in all, though, it was a good battle and I got out of there healthy. Unfortunately, a lot of guys got injured this past weekend. Buy, yeah, it has been a good, solid run so far and I’ve been enjoying the races, for sure. It has been a lot of fun.

Last Saturday at Dallas was kind of a quirky race, wasn’t it? More than a few world class guys went down or got bit by the Arlington track.
Yeah, I know. It was weird. It was definitely a good track and that drago’ns back caught a few of the guys. Honestly, I think the Triple Crown events kind of make it a little bit weirder. We did so many laps at Dallas. Back in the day we were doing 20-lap main events and now we’re doing almost three 20-lap main events in one night. I think that kind of puts a toll on some of the guys. I think Feld [Entertainment] and the AMA might need to rethink that because it…I think the track can break down and get sketchy and guys start getting fatigued and it can get pretty dangerous. Besides that, I felt like the track was a good racetrack. It was a little bit one-lined and maybe a little bit hard to pass on, but the dirt was really good. I just think that a lot of racing like that probably adds up. If you’re not fully focused, a mistake could turn into a really big one.

To your point, it’s a pretty tall order to ask you guys to psych yourselves up and leave the starting line three times for three main events. Seems very intense. Thoughts?
[Laughs] Yeah, it’s definitely gnarly. We added it all up and I think it was over 35 percent more riding compared to a normal supercross night. Yeah, they ask a lot from us and we usually don’t have a choice, so we just do whatever we need to do. Unfortunately, sometimes you see those races take more guys out than not. That’s racing, you know? You just have to be on your A-game. Unfortunately, this stuff takes guys out sometimes. Yeah, definitely, three starts are always challenging, but for me, the more starts the better lately because I’ve been working on that stuff pretty hard. It’s all be pretty nice going into Atlanta and being back to normal.

Dallas went well for you and Atlanta and Daytona are up next. Do you like the Southeastern stadiums and tracks?
Yeah, for me they’re awesome. I can pretty much drive to all of them like Daytona and Tampa and Atlanta and the ones like that. Anything Florida, Georgia for me is really nice because I can be at home and just bop up there and race on the weekend and then bop right back home. The East Coast has always been real good to me. The past few years I actually hadn’t been able to race in some of these races due to injuries and stuff, so it has been nice to be around the East Coast fans. They get really excited and I have a big fan base out here and it has been real cool to see that.

Your results have been solid with top five finishes being commonplace. The consistency you’ve been showing is really impressive.
Yeah, I mean things definitely have been going good. I’ve had to overcome a lot of obstacles at a lot of races. It was behind the scenes stuff that people don’t really see. This year I’ve also been really mentally strong to overcome a lot of situations and to put myself where I’m at right now in the championship. I’m in a good spot. For me, I feel like I’m overcoming these little things. I’m at that point where it’s all about to turn. It’s just depending on when. For me, with my riding, I feel super fit and fast and comfortable on the bike. Definitely the consistency has been there. That’s been no issue. My fitness is right there. It’s just putting all the little pieces together. I feel like that at any moment that switch is going to flip. I’m ready to be there whenever that situation arises. Hopefully it is sooner than later.

Well, Atlanta on Saturday night will mark the halfway point of the season and you’re right there. You’re only 27 points off of 450SX class leader Eli Tomac.
Yeah, for the halfway mark we’re in a really good spot. I haven’t been in this spot for a long time. For me, this has been like writing a whole new chapter in my career. I’ve flipped the switch and have been staying consistent and working hard and making progress with my motorcycle and the team. Things have definitely turned the corner for the better for me. It is cool to see that. For me, I’m now capable of beating all the best guys. I think that shows that I have what it takes. I just really need those good starts to be able to put it all together. If I can keep moving up every weekend and get better starts, I’ll be in a really good, comfortable position.

Yeah, I mean you could win this thing!
Yeah, like I said, I’m definitely in a great position and I’ve been holding real strong where I’m at, but for me, I’m ready to win. To win this championship is going to take me turning the corner and getting a whole bunch of race wins. I need to be on that podium a lot. You never know what’s going to happen in the season. There are still a lot of races left, so right now at this particular point, I’m in a really good position. I just need to make it happen and I believe I can, for sure. It’s going to be a fun rest of the season, for sure. I’m beating everyone out there already and that’s the cool thing. Maybe one of these weekends I can get a better start and why not do it at Atlanta this coming weekend? That’ll be good.