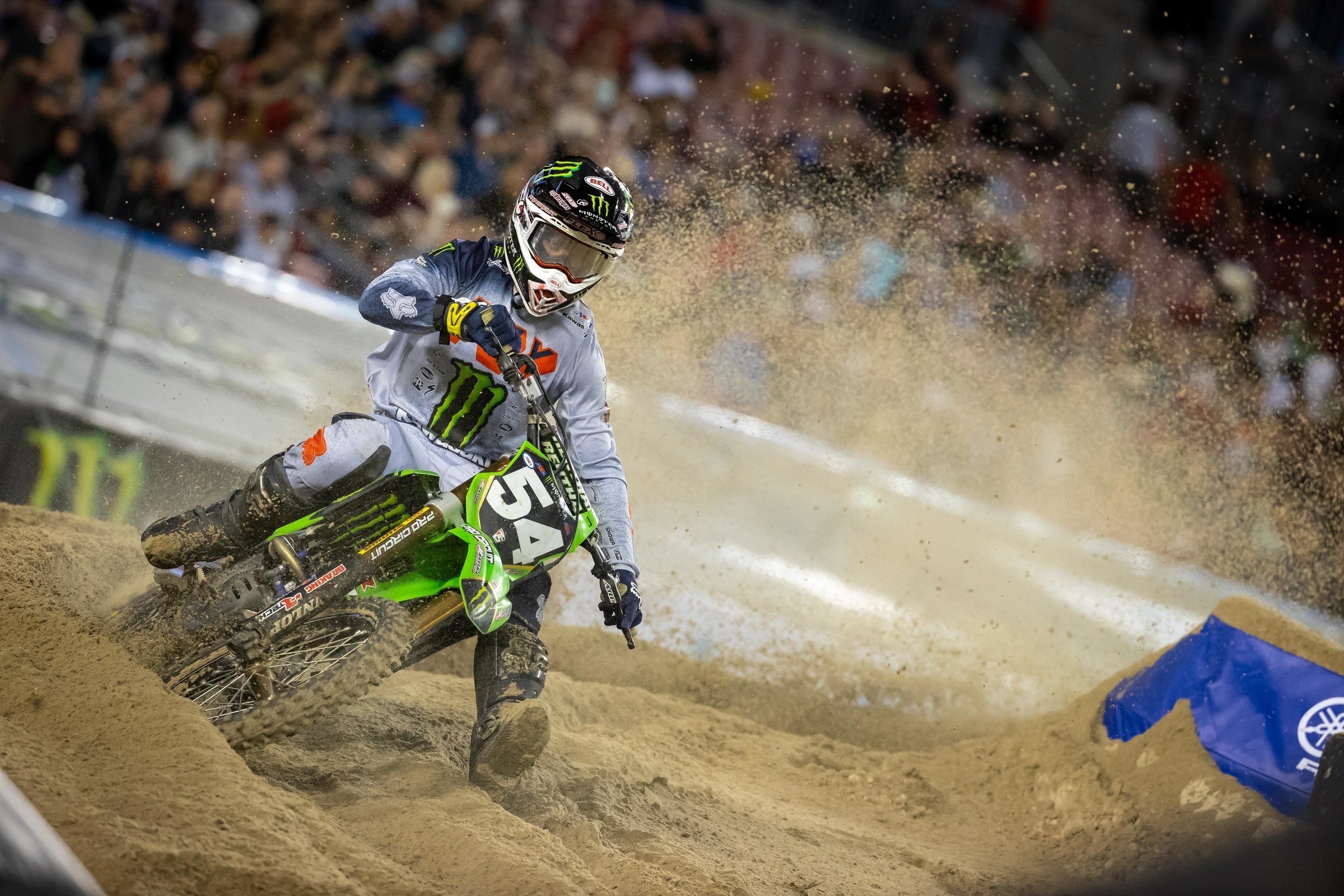 Not as much action for the lead in either class, so let’s talk Florida geography. Where is Tampa in relation to the homes of the stars?

It’s funny how Tampa and Daytona have become the new “home races” for many of the riders. The mass exodus to Florida happened in the early 2000s. With California state income taxes at 8 percent and Florida hovering at a beautiful 0 percent, riders like Chad Reed, Ryan Villopoto, Josh Grant, Christophe Pourcel, and Grant Langston, just to name a few, all made the permanent residence move across the country. Not only did the tax savings help, riders were also able to cost effectively buy their own property for first rate training facilities. Those riders built their own facilities in the areas radiating outwards from Orlando, but riders like Tim Ferry, Davi Millsaps, and Ricky Carmichael already had their home setups dialed in. As the years passed, those riders retired and passed on the facilities to more and more riders, expanding the network. Now, in 2020, there is the GOAT Farm, GPF (Georgia Practice Facility), MTF (Millsaps Training Facility), and Justin Barcia’s compound all in the greater Tallahassee area of north Florida and southern Georgia. A couple of hours southeast, Tim Ferry’s Red Dog Academy sits just a mile or two from Chad Reed’s vacant property in Dade City, Florida.

As one continues a half hour east, they then run into no less than four or five more full-time training compounds. The Nest is home to Ken Roczen, Alex Martin, Adam Cianciarulo, and more. The Baker’s Factory hosts the KTM and Husky teams, most notably with Zach Osborne, Marvin Musquin, and Cooper Webb there full-time. Blake Baggett has his own Chupacabra Ranch where he trains with several privateers. The Stewart compound sits in Haines City, and not to be outdone, Christophe Pourcel’s tracks are just down the road, too. All of these central Florida compounds are within an hour of each other and make up the bulk of supercross stardom. While the ‘80s and ‘90s were all about that SoCal life for riders, the hub of racing has moved a few thousand miles east to Florida. If you had gone to El Cajon in the late 1980s and told RJ and Glover that every rider would soon leave California in favor of Florida, they probably would have physically harmed you. With the tax break, available land, and year-round riding weather, Florida is the place to be for now.

The race was often won and lost in the sand. What was the key to that?

The sand section was so soft and inconsistent that each lap was its own adventure. The ruts were changing each lap and the slightest lean this way or that could send riders careening off the track. There was a lot of talk about which line was faster and I don’t know that the answer was that same at different points. Eli Tomac made up a lot of time by switching to the outside in the sand berm during the main event while other riders like Ken Roczen decided to stay with the tight inside come Hell or high water. I can’t really blame Roczen for wanting to choose one and stick with it as it allowed him a bit more predictability. Switching lines meant a full straightaway of surprise as well as an ever changing berm to contend with. In the end, though, we saw more passes in the sand sections than anywhere else.

Did the sand turn actually work?

Ehh, I am torn. I don’t know if it’s fair to say it worked when it was changed literally every time the bikes left the track throughout the day. It was changed throughout the qualifying sessions creating a very inconsistent afternoon. That’s typically a big no-no as one session’s track layout will be different than the other. In this case, though, the track crew felt it was more important to sort it out for the night’s racing, regardless of the afternoon issues it caused. It seemed to be okay in the race and created passing but I am hesitant to say it worked when it was such a disaster all day long.

The dirt was hard and slick. Stereotype for Florida is sand, or softer dirt, but is this actually typical for parts of Florida?

Florida has a bit of everything. This same dirt was used in Tampa for the 2018 race and was even more slippery that night. If you go back and watch the 1999 Tampa event, the dirt was much lighter in color but still very slippery during the night’s racing. Smash cut to Orlando 2007 and the dirt was incredibly soft and had a white hue. Jacksonville’s dirt in the 2009-2011 seasons was a bit more in the middle, giving traction but not rutting up like Orlando did. Daytona is of course the extreme, putting riders in deep, black sand for most of the track. So, in short, Florida can and has provided any sort of dirt desired.

So much carnage in practice. The obstacles didn’t seem incredibly crazy. Why so much chaos?

Most of the incidents centered around two sections: the whoops and the sand. We covered the sand above but the whoops took many riders out including Benny Bloss, Adam Cianciarulo, Chad Reed, Zach Osborne, and nearly Malcolm Stewart. They were slick and square, causing the rear tire to hop all over the place instead of driving forward. They did not look like fun at all, honestly. There are many things that I miss about racing but whoops like that are enough to keep me happily in the stands.

Do we have something brewing with Justin Hill? He’s been solid all year but this was another step forward.

He’s definitely building but I think part of this was the dirt composition. Justin Hill is a finesse rider, regardless of his MMA warm-up techniques before the races. He has great throttle control and superb technique. On tracks with less than optimal traction and very difficult sections, Hill’s skill set shines. He finds traction where others can’t and can consistently nail sections that give other riders a world of trouble. I do think it’s impressive that his fitness looks better than ever but I also believe that track was a very good match for his strengths.

The Hill Bro’s know how to get fired up for SX ?? #SupercrossLIVE

Shane McElrath completely dominated the evening. Is this bad news for everyone else, or do we pump the brakes on round one conclusions?

McElrath is an opening-round assassin. I fully expected him to win the opener. Whether or not we see him just runaway with this series is another story, though. He has had a tough time maintaining this same level as the series goes but maybe 2020 is finally his year. I do think he is the best rider in this championship but it’s up to him to find the staying power that’s previously eluded him.

What other riders surprised in 250SX East?

I liked what I saw from Chase Sexton. He was much more confident and assertive than last year. He has the #1E plate and showed that he wants to keep it. It’s not a shock that he was on the podium but he just had a different confidence in his riding that I didn’t see a year ago.

I was also impressed by Garrett Marchbanks. His speed has increased and he wasn’t scared of the moment. I was very iffy on this 2020 season for Marchbanks but he showed that he can ride at the front.

Joey Crown was the story of the 250 class. He qualified for his first ever main event and then crushed all 16 minutes with an eighth-place finish. He was surely on many teams’ radar and paid off in the best way for those willing to believe. He was a 52-point scorer in a season that hasn’t seen much, if any, of that.

One of the other big topics was Isaac Teasdale. His +13 handicap had big potential but he needed a desperate last second pass to qualify for the main event. His main event didn’t go to plan but he still paid off for a certain Steve Matthes and his mid-week bet.

A few other notable 250 riders paying big points were Jace Owen, Hunter Sayles, Jo Shimoda, Nick Gaines, and Cedric Soubeyras. For Owen, he came in fresh off the AMA Kicker Arenacross Series, where he is battling his teammate Kyle Peters (the series had a weekend off just in time for Tampa). Jo Shimoda made his professional supercross debut and while he admittedly rode tight, he still paid off with a solid 36 points. Cedric Soubeyras was in a battle royale with Josh Hill for 12th, finally relinquishing the position on the final lap. Soubs still delivered 36 points (to my team, thank you) and miraculously didn’t end up on the ground after repeated aggressive pass attempts by Hill.

A few riders certainly disappointed, too. They will have their chance at redemption but the short list is Lorenzo Locurcio, Jalek Swoll, Kevin Moranz, Jordan Bailey, Justin Starling, and Enzo Lopes.

In the 450SX Class, we saw the return of Justin Hill’s Tampa prowess, saw the return of Dean Wilson as the highest scorer, and saw the return of Broc Tickle to racing entirely. Adam Enticknap finally made good on his efforts, piling up 36 points along the way. The 722 only had a 2.9 percent pick trend so kudos to those willing to take a deep shot. Chad Reed finally paid off for the die-hards, handing over a 30 spot to his team owners.

The Debbie Downers of the 450 crew included Benny Bloss (didn’t race due to a practice crash), Blake Baggett (didn’t race the main event), and Aaron Plessinger. Most of the other obvious choices all paid decent points. With a few riders out of the series, we are slowly entering the inevitable time where injuries thin the field. Let’s just hope the sharp end of the pack healthy, ensuring a fight all the way to SLC.