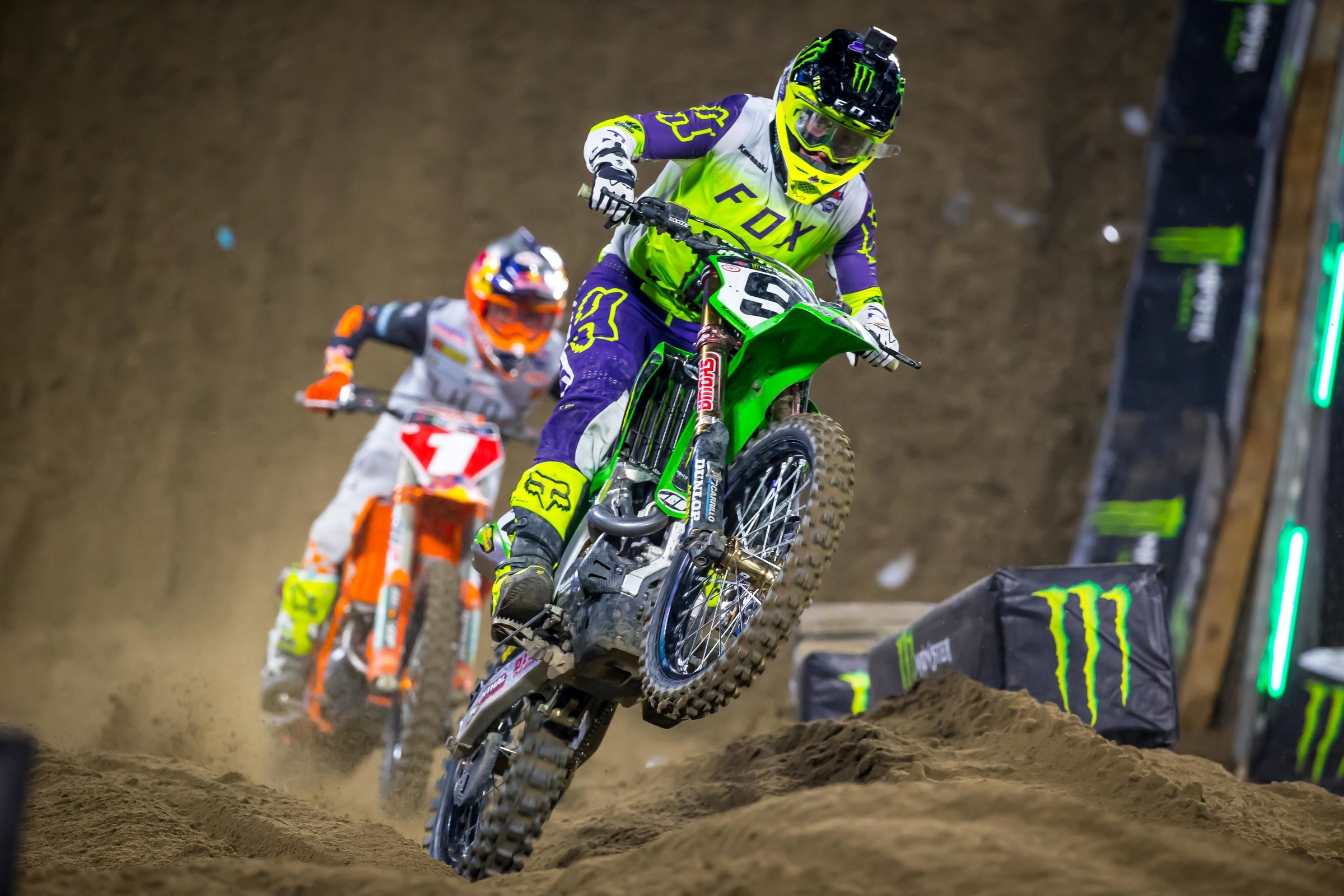 3 on 3 Moving On From The Opener

With Anaheim 1 now in the rear view mirror and the series heading to St. Louis, many storylines will have a new chapter in this coming weekend of racing. The 450SX class was full of surprises at the opener, but a different stadium and soil type can quickly flip the script.

This week for 3 on 3, Kris Keefer, Jason Thomas, and Ryan Sipes discuss what they saw at A1 and what they expect to see as the series heads 2,000 miles East this weekend.

1. Who impressed you at Anaheim?

Kris Keefer: As good as Justin Barcia was, I had a feeling he was going to be good because I kind of had an inside line on how he’s been feeling. The most impressive ride of the night goes to Cooper Webb for his sheer mental toughness to get on the podium when he couldn't get out of his own way in practice. I said this on our Racer X Supercross Preview Show, that Cooper is the most mentally sound rider on the track so why are we not talking about a repeat more? It’s crazy to me! To feel like crap and not only hang in there physically, but mentally as well, is so hard to do. Yes, even for Eli Tomac! Hell, I don’t even want to walk to the kitchen to get coffee when I am sick, let alone ride a dirt bike.

Jason Tomas: There are always many who underperform, some who satisfy expectation and those few that really impress. The one rider I was impressed by might surprise, though. After all, he was the 2019 champ. That’s right, Cooper Webb, folks! Listen, I know he was the champ and the easy question is, “how can he have overperformed and gotten third place?” I get it. My answer to that is that I didn’t expect him to finish on the podium. He didn’t look good all day and further, was very sick on the worst day of the year to be sick. With those things in mind, I assumed he would be in survival mode, looking for a top ten finish and better days ahead. When that looked to be the best case scenario, Webb stepped up and delivered a podium finish anyway. He delivered when things looked to be stacked against him. Respect.

Ryan Sipes: Three people impressed me. Adam Cianciarulo is the obvious one. The kid rode like a man. He was probably the fastest guy all day and when the pressure was on, he was pretty solid. He made mistakes, yes, but I think on a track that gnarly everyone was making mistakes. Great ride, rookie.

Barcia rode awesome as well. His win last year was kind of fluky right? It was muddy, some guys didn’t get great starts, etc. This year he earned it fair and square. He and AC were pretty similar in speed and seemed to be just tracking each other at the beginning. He had the one big mistake, but kept his composure and stayed close enough to capitalize when Adam almost killed himself on the 3-3.

Hopefully the Blu Cru doesn’t hate me for this, but the third person (or people) who impressed me is whoever is in charge of Barcia’s bike this year. Ever since he has been on a Yamaha, it has been scary to watch him ride. Yeah, he’s Bam Bam, yeah, he gets a little loose, but even when he won those races a few years ago, I almost felt bad for him with how bad his bike looked. You could see that it just did not work right. At Anaheim it looked great. He was getting through the whoops good and looked comfortable in the turns. Kudos to the guys at Factory Yamaha. They might finally have this bike figured out.

2. The opener is always weird. Do you really take anything from it or do you take everything you saw with a grain of salt?

Keefer: I’ll take away more from this year’s A1 than I did last year obviously. To me the design of the track at this year’s A1 wasn’t crazy tough, but it tested the riders in a way we normally don’t see until we get to rounds eight or nine because of the rain we had in Southern California (making the track softer than normal). If you go off of years past, riders will bitch about their bikes the most at two points in the year. A complaint to the team at round one will inevitably come that will usually be about the bike being too soft (because of the hard Anaheim surface, the riders pushing more than at the test track, and the jump faces being notchy) and the next moment of confusion will be near round nine (Atlanta-ish) when they get to a track that’s super soft, gets broken down, and very rough. The riders that didn't do so well at A1 will now be on their round nine complaint, so we may not see as many changes with the rider’s bikes come halfway. Anaheim usually isn't a great place to set up a factory bike for future rounds, but this year the ground had just enough moisture in it to really take away some good notes going into St. Louis. So, with all that being said, I think we will see better rides by some guys that weren't on the podium at A1.

Thomas: I don’t think A1 is the make or break race that everyone wants it to be. Riders are way too nervous to show what’s what. Most every rider is simply trying to get the day over with. There is far too much anticipation placed upon an event that, in the end, carries no more weight than any other race. For instance, at Las Vegas in May, did anyone really care that Barcia won A1 four months before? His sponsors probably did, and of course he and his team did, but most fans would probably have to think hard to even remember it. That’s just how recency bias works. A1 is great and a lot of fun to attend, but to draw hard conclusions based on A1 is almost always a bad idea.

Sipes: Most of what I saw seemed legit. We know Cianciarulo can be lightning fast and Barcia has won here before. Ferrandis looks like “the guy,” Justin Cooper was bound to win at some point, and Forkner did Forkner stuff.  Tomac being off was sort of A1-weirdish, but supposedly it was arm pump. The bad start didn’t help either. I think he will find his inner Eli warp speed sooner rather than later. I also hope Kenny’s issue really was the bike settings. I want to see him win again.

3. From a baseball stadium in California to a football dome in the Midwest. Could round two be totally different than round one?

Keefer: Much like my previous comment, I think some bike set up issues will be handled by St. Louis that otherwise would have arose there. However, from the track map it looks like there will not be a triple, which is weird, but may have more passing opportunities, with some tricky rhythms, as well as enough 180-degree corners to invite some block passing.

Thomas: Yes, and I expect it to be, especially in the 450’s. Besides the difference in dirt, venue, etc., the pressure of A1 is off. Riders will be more in the flow of the season and out of the limelight that is Orange County. There won’t be any sponsors pulling riders in eight different directions and they will be able to focus on the task at hand. Simply given the strange results at A1, odds are that we will see a very different outcome this weekend. That in itself is enough to get me excited.

Sipes: I think it could be. Like you said before, round one isn’t the best time to judge these guys. Some guys will do better because it’s East Coast dirt, but for the most part guys will just be more comfortable after getting a race under their belt. You practice for months on end but it’s just that...practice. Preseason testing is the same thing. One guy burning a million laps on a test track he could ride with his eyes closed, the bike is going to feel great. Getting behind a real gate, with real competitors, racing a real track, that is something you can’t simulate on a test track. You heard a lot of guys say they missed on their bike settings last weekend. Well, now they have a chance to redeem themselves. I would bet we see some more of the preseason favorites up in the fight at St. Louis.