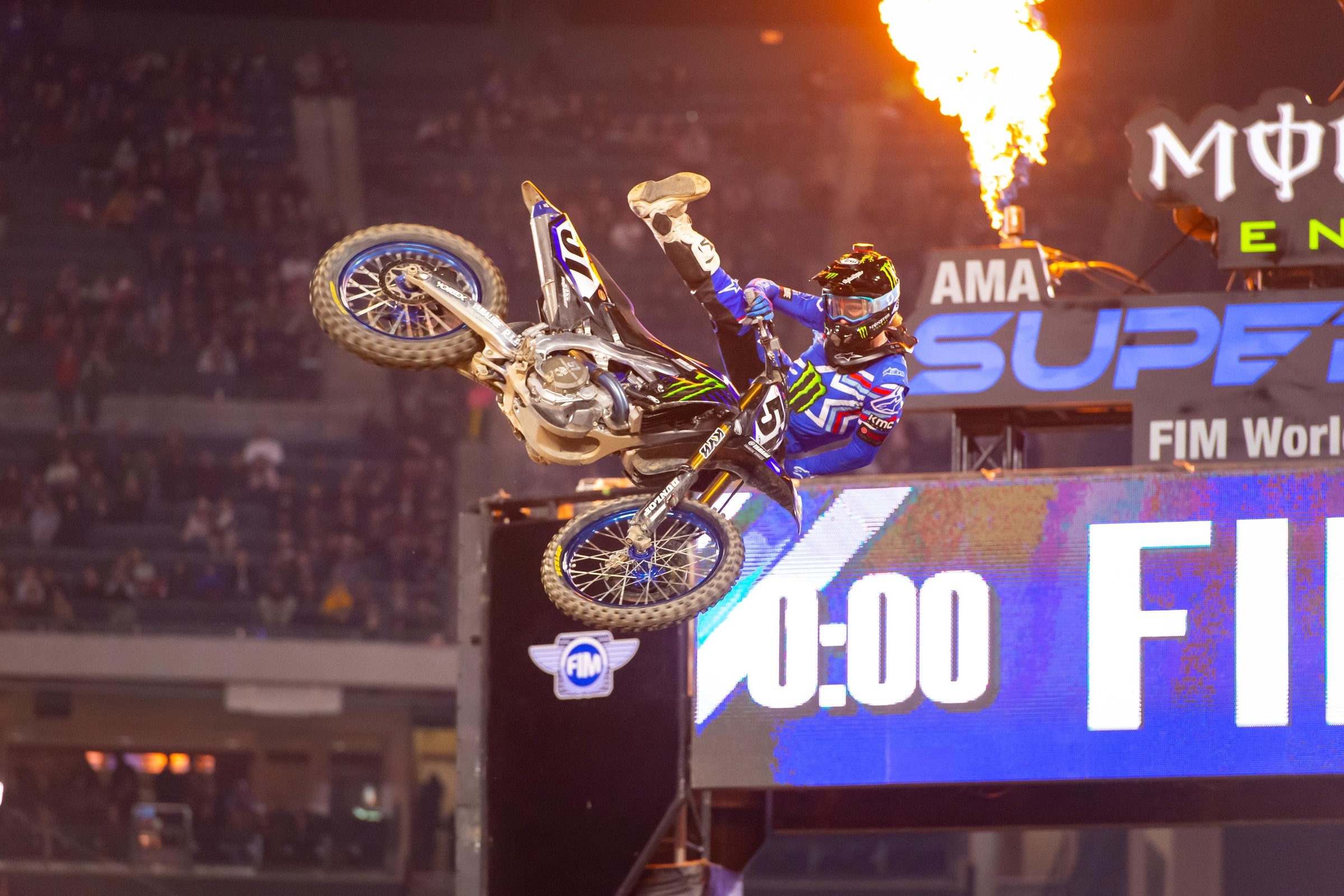 "Meaningless Fun Fact to Keep in Mind for Tomorrow" was the title of the Vital MX post that went up on Friday afternoon. Intrigued, we clicked on the post written by a user named "smee113" and saw this:

Yamaha has won the first Supercross of every decade:

That's a pretty amazing bit of moto trivia, either a coincidence or just a really neat trend. But looking at the lineup for Anaheim on Saturday night, it seemed like a trend that was about to end, as although Justin Barcia won the 2019 Anaheim SX opener, he didn't seem to be one of the favorites for the 2020 Anaheim SX opener, and his Monster Energy Yamaha Factory Racing teammate Aaron Plessinger is just getting back up to speed after a big injury last spring.

The next morning, after Barcia shocked pretty much everyone and won again on Saturday in the first race of the twenties, we checked back. This time smee113's opening post read this:

Yamaha has won the first Supercross of every decade;

So how did Yamaha secure the first premier-class win of each decade? We checked the archives and the Racer X Vault for this history of Yamaha's success in the opening SX races of the last six decades. With a nod to smee113, here is what we found.

In regards to how most mark the genesis of supercross as we know it, it's almost always the 1972 Superbowl of Motocross, held in the Los Angeles Coliseum by rock & roll promoter Mike Goodwin. While other races in stadium settings happened before '72—the Great Victory Day races in Prague, Czechoslovakia, the Houston Astrodome TT races, even the '71 and '72 Daytona Motocross races—it was Goodwin's Superbowl that brought together all of the elements that became "supercross" as we now know it: a motocross race in a stick-and-ball stadium, held at night under the lights. And the winner of the first Superbowl of Motocross was the just-turned 16-year-old Yamaha rider Marty Tripes. He went 2-2-2 in the three-moto format, becoming the youngest winner ever in AMA SX/MX racing.

If you're one of the folks who mark the first AMA Supercross as the first round of the first true stadium motocross series, then it's still a Yamaha rider, because at the 1974 Daytona SX, which kicked off the two-stop AMA/Yamaha Super Series of Stadium Motocross, was won by Pierre Karsmakers in the 250 class. There was also a 500 class, won by a guy you might have heard of named Roger De Coster.

Team Yamaha went into the 1980 AMA Supercross Championship full of uncertainty. Bob Hannah had won the last three AMA Supercross titles in a row and would have been the overwhelming favorite for 1980 had he not broken his leg in a water-skiing accident. The team did have Broc Glover, but at that point the future AMA Motorcycle Hall of Famer and all-time legend was still considered something of a 125cc specialist, as he had little SX experience to that point in his young career. Yamaha had hired the veteran Marty Tripes to the team, which was ironic since Tripes was the one driving the boat that Hannah was skiing behind when he broke his leg. And they also had Mike "Too Tall" Bell, who at 6'3" was much taller than most of his competitors. Turns out Bell was ready to step into the very big boots Hannah had left to fill, and he led a Yamaha sweep of the first night of the Seattle doubleheader, with Glover and Tripes in tow, then added a follow-up win on the second night of racing.

Bell would go on to win the 1980 AMA Supercross title, giving Yamaha four in a row. But then that was it for a very long time for Yamaha. By the time they won the SX title again, in 1998, the color of the Yamaha brand in the U.S. would have undergone two wholesale changes, going from yellow in 1980 to white and then to the blue of today (though it does seem to be getting as much black as it does blue in 2020).

When the 1990 Coors Extra Gold Super Challenge/Camel AMA Supercross Championship kicked off at Anaheim Stadium, Team Yamaha's Damon Bradshaw was still just 17 years old, which meant he was too young for the products of either of the series' main sponsors. He also had raced in exactly one AMA Supercross in the premier 250 class, finishing third in the '89 San Diego SX in his debut. Then he switched back to the 125 class and won the '89 AMA 125cc East Region title. When he went to Anaheim for the '90 opener, he wasn't really considered a title threat, but moments after the gate dropped, and after a crazy holeshot from the far outside, no one was underestimating the rookie Bradshaw.

The great moto scribe and photographer Fran Kuhn headlined his Dirt Rider magazine coverage, "Damon Bradshaw and the Amazing Holeshot from Hell." He described what happened this way:

"It was all over by the time they hit the first turn. Jean-Michel Bayle slid his CR250 in alongside Rick Johnson's matching factory Honda, leading the pack through the first turn of Anaheim's main, but by the time the young world champion had sized up the first jump and made his takeoff calculation, Damon Bradshaw was already 15 feet in the air and 30 feet ahead. That was as close as JMB ever got to the Yamaha rider."

You will see how Bradshaw did it on this video below, beginning at the 17:15 mark:

ESPN commentator Larry Maiers to Dave Despain: "Dave, I have no idea where Damon Bradshaw came from. To be honest I thought Bayle was going to walk away with the holeshot on this one." (A better replay shows it at the 18:45 mark.)

By 2000, Yamaha was squarely back in the driver's seat of AMA Supercross. Jeremy McGrath had joined them in 1998 and immediately won the title, then added another (his sixth overall) in '99. He went into the new millennium as the easy favorite to three-peat again, and he delivered, beginning with a resounding win in the Anaheim opener over three Honda riders: Mike LaRocco, Kevin Windham and Sebastien Tortelli. The King of Supercross would go on to easily win his seventh and final SX title over fellow Yamaha rider David Vuillemin.

San Manuel Yamaha rider James Stewart was one of the two big favorites going into 2010, the other being his bitter rival Chad Reed, who would be on Kawasaki in 2010. When Reed tangled with Austin Stroupe on the first lap of the Anaheim opener and had the spokes ripped out of his front wheel, that should have opened the door wide for Stewart. But what he didn't expect was a battle from the young Suzuki rider Ryan Dungey, who got the holeshot and led much of the race. The veteran Stewart caught the 450SX class rookie in the late stages to win Anaheim and keep Yamaha's "decades" streak going, but within two weeks Stewart would be out of the series with an injury, as would be Reed. This opened the door for the first of eight straight titles that would be won by "the Ryans," first Dungey, then four by Ryan Villopoto, then three more by Dungey.

Last Saturday night, Yamaha once again managed to win the first race of the decade as Monster Energy Yamaha's Justin Barcia won the Anaheim opener for second year in a row. And for the second year in a row, Yamaha topped the 250 class as Justin Cooper took the first SX win of his career over his teammate, defending 250SX West Region champion Dylan Ferrandis. That’s the second-straight 1-2 finish for the Star Racing Yamaha team at A1. Last year's Anaheim 250SX class winner Colt Nichols of the Star Racing Yamaha team is racing in the 250 SX East Region in 2020. Ferrandis also finished second at Anaheim last year.